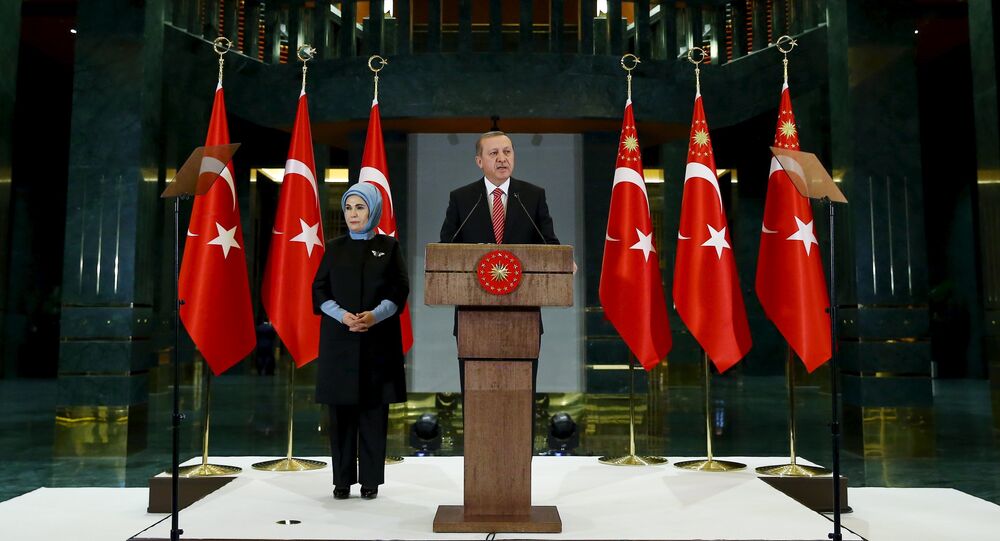 For decades Ankara has used its NATO membership to achieve its own goals, which very often do not coincide with the interests of the Alliance, Czech-based freelance journalist and analyst Martin Berger emphasizes.

Ankara's recent provocative action toward Russia has prompted deep concerns among NATO member states: it is clear that not one of them is interested in escalating tensions with Russia.

"The members of NATO fear that the 'impulsive actions' of Turkey's President will force them into a new major conflict, and NATO is not prepared to fight it yet. These 'impulsive actions' may trigger the response that is required by Article 5 of the North Atlantic Treaty," Czech-based freelance journalist and analyst Martin Berger writes in his article for New Eastern Outlook.

© Sputnik / Dmitry Vinogradov
Erdogan's Mistake: Russia May Now Initiate Own 'No-Fly Zone' Over Syria
In order to resolve the dangerous crisis which erupted in the wake of the downing of an Su-24 bomber by a Turkish fighter jet, the West is now searching for those "guilty" of the attack. And it is obvious that the guilty party is Turkish leader Tayyip Erdogan, Berger stresses.

"Vice-Chancellor of the Federal Republic of Germany and the chairman of the Social Democratic Party of Germany (SPD) Sigmar Gabriel expressed harsh criticism of Turkey after the downing of Russia's Su-24 bombers by labeling it an 'unpredictable player'," the analyst points out.

Citing French media sources, Berger calls attention to the fact that since the Muslim Brotherhood "came to power" in Turkey, the country has become a serious headache rather than a reliable partner of the Western bloc.

Furthermore, under Erdogan's rule Ankara has spoiled Turkey's relations with Israel. On the other hand, during the Arab Spring the Turkish leader had first sided with Assad but then "stabbed him in the back" allowing Islamists from around the world to flood Syria through the Turkey-Syrian border, Berger narrates. He adds that Ankara has never missed an opportunity to demonstrate its disdain toward the Kurds, which have long been fighting against Islamic State and even went so far as to attack them.

In light of this the analyst quotes the former NATO commander of Europe, Ret. General Wesley Clark, who once said about Turkey:

"Let's be very clear: ISIL is not just a terrorist organization, it is a Sunni terrorist organization. It means it blocks and targets Shia, and that means it's serving the interests of Turkey and Saudi Arabia even as it poses a threat to them. All along there's always been the idea that Turkey was supporting ISIL in some way… Someone's buying that oil that ISIL is selling, it's going through somewhere. It looks to me like it's probably going through Turkey, but the Turks have never acknowledged it."

© AFP 2021 / Saul LOEB
Are Washington's Fingerprints All Over Downing of Russian Su-24 Bomber?
Commenting on Ankara's recent provocative strike on the Russian Su-24 bomber, Berger notes that Turkey's protégés, much-talked-about "defenseless" Turkomans, not only killed the Russian pilot as he descended, but also blasted a Russian helicopter (with a US-made TOW missile) that was sent to rescue the Su-24 crew.

The analyst cites retired US Major General Paul Vallely, who lambasted Ankara for an apparent attempt to revive the Turkish Ottoman Empire. The American general believes that due to Ankara's fishy cooperation with Islamic State, Turkey should be kicked out of NATO.

"For decades, Turkey has used NATO membership in order to achieve its own objectives, which, as a rule, do not coincide with the interests of the alliance," Berger underscores.

"In the early 2000s, Turkey chose to demonstrate its support of Islamism, which has always been a more serious threat to the West than the Soviet Union," the analyst notes, adding that NATO should get in an alliance with Russia against the Islamist threat, including that posed by the Turkish leadership.