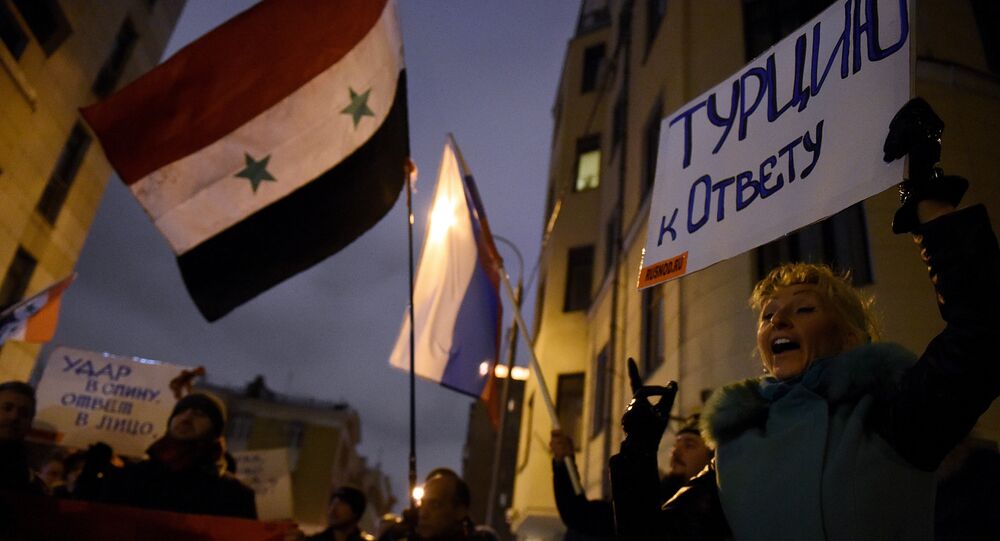 The Defense Ministries of Russia and Turkey have cut all cooperation channels. Military analyst Sergei Grinyaev believes the sharp rise in tensions between Russia and Turkey could be beneficial to a third party which is coordinating Ankara’s actions.

© Sputnik / Alexander Vilf
Murder of Su-24 Pilot: Are Turkey, NATO ‘Responsible for War Crime’?
In addition, the representative of the Russian Navy was called back from Turkey. He was sent to Turkey to coordinate activities of the Black Sea Fleet and the Turkish Naval forces, spokesperson for the Defense Ministry Major General Igor Konashenkov said.

"This concerns all ties, not just the so-called hotline that was launched in order to avoid possible air incidents during the destruction of terrorist infrastructure in Syria," he added.

Relations between Russian and Turkey deteriorated after a Turkish jet shot down a Russian Su-24 bomber over Syria on Tuesday. Russian President Vladimir Putin ordered the government to work out a set of economic measures in response to the act of aggression by Turkey.

Cooperation between the two countries via military channels is very important, Sergei Grinyaev, head of the Center for Strategic Prognosis, told Sputnik Radio.

Nevertheless, the suspension of military cooperation with Turkey will not seriously hit Russia, he added.

"This is a serious loss. Such military contacts are always important, especially in unstable regions. The Turkish Air Force is to blame for the incident with the Russian bomber. The Turkish government bears the responsibility. Russia now considers this type of cooperation pointless. But as for our military operation in Syria, it will not be affected," the analyst said.

According to him, the restoration of military contacts depends first of all on Ankara’s policy.

"Russian-Turkish bilateral ties reached the phase where it was impossible to continue any contacts. Their restoration would depend on whether Ankara would be ready to ease the tensions," Grinyaev said.

© REUTERS / Umit Bektas
Relations With Russia Very Important for Turkey - Erdogan
Turkey claimed that before the Su-24 was downed attempts were made to communicate with the crew and warned the pilot of the airspace violation. The navigator of the Su-24 who survived the attack said Turkey sent no warning and the aircraft did not violate Turkish airspace.

Later, Turkish and other foreign media published an audio tape of an alleged conversation between the crew of the Turkish F-16 and the pilots of the Russian plane. In turn, the Turkish Defense Ministry said they had no such tapes.

The analyst said the audio tape was part of a stove-piping campaign by a third side that wants to escalate the situation.

"Turkey is probably not acting on its own. Erdogan’s statement that Turkey will continue its firm policy means Ankara is unlikely to take steps to de-escalate the conflict. Turkey seems to follow a scenario, and there are more powerful players behind it. They pursue their own geopolitical goals in the region," the analyst said.

According to Grinyaev, it would serve Turkey’s interests to revise its aggressive stance toward Russia.

"Turkey’s position is extremely unconstructive. It is an act of aggression. And now Turkey should take measures to de-escalate the situation," he concluded.