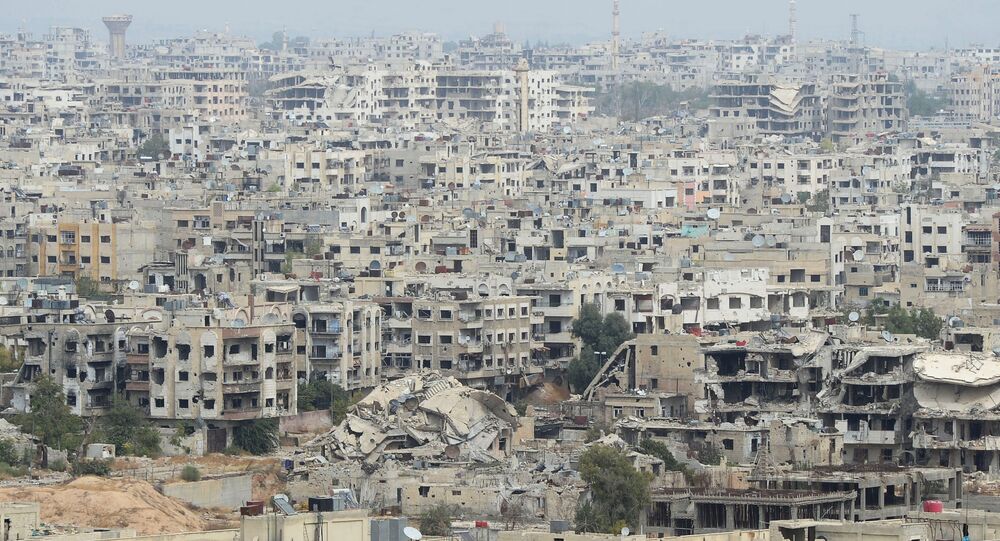 Turkey's aggressive strike on the Russian Su-24 has clearly demonstrated the impotent rage of those who planned to redraw the map of the Middle East, British political writer and journalist Dan Glazebrook emphasizes.

Syria appears to be a hard nut to crack for the "regime change camp," British political writer and journalist Dan Glazebrook notes, adding that Turkey's shooting down of the Russian Su-24 jet demonstrates the utter desperation of those who planned to remake the Middle East.

"To make sense of this apparently senseless provocation, it is necessary to cut through the multiple layers of obfuscation which surround Western narratives around Syria and ISIS [ISIL]," Glazebrook writes in his latest article for RT.

© AP Photo / Susan Walsh
Su-24 Downing: Ankara, Washington Acting in Unison in Wake of Attack
Indeed, Turkey's aggressive action against Russia should not be taken out of context.

Since the very beginning of the Syrian civil war, the West, Turkey and the Gulf monarchies have been sponsoring "an array of death squads" consigned to overthrow the Syrian government.

Glazebrook points out that the rise of Islamic State "has not fundamentally changed this underlying dynamic": the US-led phony war against ISIL, accompanied by arming and training of the so-called "moderate Syrian rebels," has shown that toppling of Bashar al-Assad remains West's top priority.

The British author calls attention to Obama's remark that the goal of the anti-ISIL coalition is not to eliminate the Islamic State, but rather to "contain" it. In other words, he meant that the West is inclined to keep ISIL focused on weakening Syria and Iraq, and not US allies, the journalist explains.

On the other hand, Russia, Iran, Iraq and Syria are resisting the Western project.

It goes without saying that Moscow's involvement in the Syrian conflict prompted panic in the "regime change camp," the British author continues.

"Belying all their 'anti-ISIS' rhetoric, the US and Britain were openly horrified that Russia might actually be putting up an effective fight against the group and restoring governmental authority to the ungoverned spaces in which it thrives," he notes.

© Sputnik / Dmitry Vinogradov
Rescued Su-24 Co-Pilot : 'I Have Debt to Repay, for My Commander'
Russia's passenger aircraft crash over Sinai has become the first "warning shot" aimed not only at Russia but also at its allies — Egypt, in particular, the British author narrates.

According to the journalist, the hideous November 13 attack in Paris has appeared to be the second "warning shot" apparently aimed at French President Hollande who offered to lift economic sanctions on Russia back in January and more recently expressed his willingness to join Russia's efforts to eradicate ISIL in Syria.

"The past week has seen a large scale Syrian ground offensive, supported with Russian air cover, in precisely the Syrian-Turkish border region which is the death squads' lifeline: a move which prompted the Turkish foreign ministry to warn of 'serious consequences' if the Russian airstrikes continued,"  Glazebrook underscores.

#SYRIA Cross-border deliveries of weapons, ammo and materiel to terrorists in #Latakia are completely blocked

​To complicate matters further, Russia has unleashed an all-out campaign against ISIL-operated oil tanker trucks destroying over 500 of them.

Needless to say, the collapse of ISIL's oil industry may deal a lethal blow to the "entire death squad project." Furthermore, it would completely undermine Turkey's covert oil trade with Islamic State.

President Erdogan's son Bilal is believed to be orchestrating the illegal trade, the journalist remarks.

At the same time France announced that it would take severe measures against ISIL' financiers, and demanded other countries do the same, the British author writes, adding that the move is likely to expose not only Turkish and Saudi benefactors of ISIL, but also the City of London…

Given the UN Security Council's latest resolution authorizing "all necessary measures" to be used against ISIL, it is becoming clear that the West's "death squad project in Syria" is falling apart at the seams.

"Turkey's actions have merely demonstrated, again, the impotent rage of those who have thrown in their chips with a disastrous and bloody attempt to remake the Middle East," Glazebrook elaborates.

"Syria is indeed becoming the Stalingrad of the regime changers — the rock on which the imperial folly of the West and its regional imitators may finally be broken," the British author concludes.