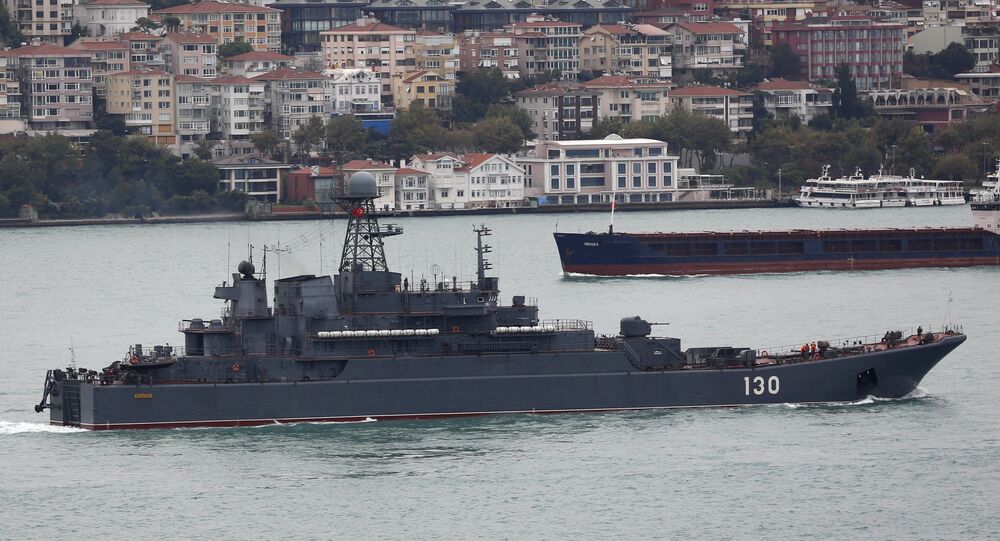 Tensions between Russia and Turkey over the downing of a Russian Su-24 bomber in Syria may challenge freedom of navigation through the Bosphorus Strait, a major pathway for Russian ships. However, a Turkish unilateral ban on the passage of Russian ships is unlikely since it would violate international law.

© AFP 2020 / BULENT KILIC
Russia Hopes Montreux Convention on Turkish Straits to Remain Inviolable
A day after the Russian Su-24 bomber was shot down near the Turkish-Syrian border Russia deployed S-400 air defenses to the Hmeymim air base in Syria in response.

In recent months, Russia’s heavy military equipment has been delivered to Syria mostly by sea, with the shortest route coming through the Bosphorus Strait and the Dardanelles.

A sharp rise in tensions between Moscow and Ankara may challenge the delivery of Russian weapons and troops through the straits. If passage is prohibited for Russia there is still the way through the Gibraltar (which takes 13-14 days rather than four days through the Bosphorus) or by air.

The passage of civilian and naval ships through the Bosphorus Strait and the Dardanelles is controlled by the 1936 Montreux Convention on the Regime of the Straits. According to Article 2, "merchant vessels shall enjoy complete freedom of transit and navigation in the Straits, by day and by night, under any flag and with any kind of cargo, without any formalities."

© Sputnik / Natalia Seliverstova
Russia Cuts All Military Ties With Turkey, Including Hotline for Prevention of Incidents in Syrian Airspace
If Turkey is being belligerent it must give passage to civil vessels of friendly and neutral nations, but only at night and along the navigation way indicated by Ankara. If Turkey is not being belligerent but considers itself "to be threatened with imminent danger of war" all vessels must enter the Straits, day and night, by the route indicated by the authorities.

As for naval warships, in time of peace Turkey must give passage to small and middle vessels belonging to all nations. Black Sea powers (including formerly the USSR and now Russia) can navigate their warships of any class through the Straits, "on condition that these vessels pass through the Straits singly, escorted by not more than two destroyers."

From a legal perspective, Turkey has no legal grounds to create obstacles for Russian vessels carrying cargo, including military cargo, Russian lawyer Vladimir Morkovkin told RBK. Turkey can ban non-friendly vessels from navigating through the Straits only if at war, the expert explained.

After World War II, Ankara made several efforts to gradually strengthen its control over the Straits. In 1982, Turkey tried to unilaterally expand the regime of the Istanbul port over the entire area of the Straits. The decision was harshly criticized by neighboring countries, and Turkey stepped back.

In December 1982, the UN elaborated the Convention on the Law of the Sea, but Turkey refused to join it and the Montreux convention remained in force. In 1994, Turkey unilaterally adopted new Maritime Traffic Regulations for the Straits, with a number of restrictions for the passage of foreign vessels.

"Thanks to the Montreux Convention, and then to friendly relations with Britain and the US Turkey has taken control over the Straits," Andre Gerolymatos, head of the Center for Hellenic Studies in Canada, told RBK.

"This control directly depends on the status-quo of the Montreux Convention itself. As for now the US and Turkey have the same interests in the region, and Washington is ready to back the document."

"In its relations with Russia Turkey has always pushed its own interests first. The core of Russian-Turkish cooperation is tourism and energy. There are a number of unsolved energy problems between the two countries. Ankara is trying to restrict the oil transit through the Straits for Russian tankers," analyst Alexander Vasiliev, of the Russian Academy of Sciences, wrote back in 2010.

According to the Russian Ministry of Transport, in 2013, 74,300 vessels crossed the Straits in both directions. In 2015, the cargo turnover of the ports of the Azov and Black Seas has increased by 5.2 percent, against the previous year. According to Russia’s Transneft Company, 24.6 million tons of Russian oil were exported via Black Sea terminals in 2014.

Russian cargo is protected not only by the Convention but also by the fact that only a few operators work under the Russian flag.

"There is no reason to be worried now, and transportation routes are not to be changed," an anonymous source from a Russian chemical company told RBK.