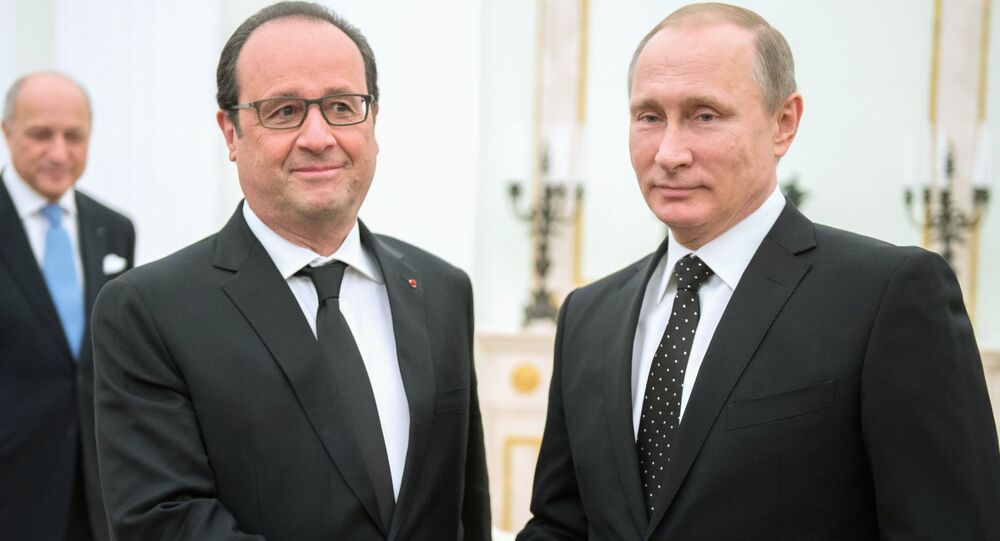 "We grieve with you over the losses that France suffered, these are major losses. According to the latest data, as far as I know, 130 people are confirmed dead and over are 350 injured. You know that Russia has suffered serious losses as a result of heinous terrorist act against a civilian aircraft [in the Sinai Peninsula]. All this forces us to join efforts against a common evil," Putin said.

© AFP 2021 / Claude Paris
US Sidelined? Russia, France Form Their Own Anti-ISIL Alliance in Syria
Russia and France became targets of terror attacks conducted by ISIL militants, who claimed responsibility for both the explosion aboard a Russian A321 passenger airliner on October 31 and the November 13 deadly terror attacks in Paris.

France calls for a broad and strong coalition in the fight against terrorism, Hollande said during a meeting with the Russian leader.

Putin said that Moscow and Paris shared similar stances concerning the creation of a broad coalition to fight terror.

"We see that you pay a lot of attention and make efforts to create a broad anti-terrorist coalition. You know our position and we are ready for joint work. Moreover, we believe it is absolutely necessary, our stances are similar in this regard," Putin told Hollande.

Hollande said that he came to Moscow to coordinate joint actions aimed to legitimally fight against terrorists.

"This is why I am here in Moscow, with you, to jointly find a solution on this path, to coordinate efforts to effectively fight against a common enemy," Hollande told Putin.

"We know that terrorism is our common enemy, that it has territory, an army and finances, so we must create this broad coalition to strike at these terrorists," the French president added.

Hollande's decision to visit Moscow opens the way to forming a broader united anti-terror coalition, previously requested by Russia. Russia's push for the coalition was expressed in President Putin's September 29 speech at the UN General Assembly.

The announcement came in the aftermath of the November 13 attacks in Paris, in which extremists killed 130 people and injured over 350. ISIL claimed responsibility for the attacks.