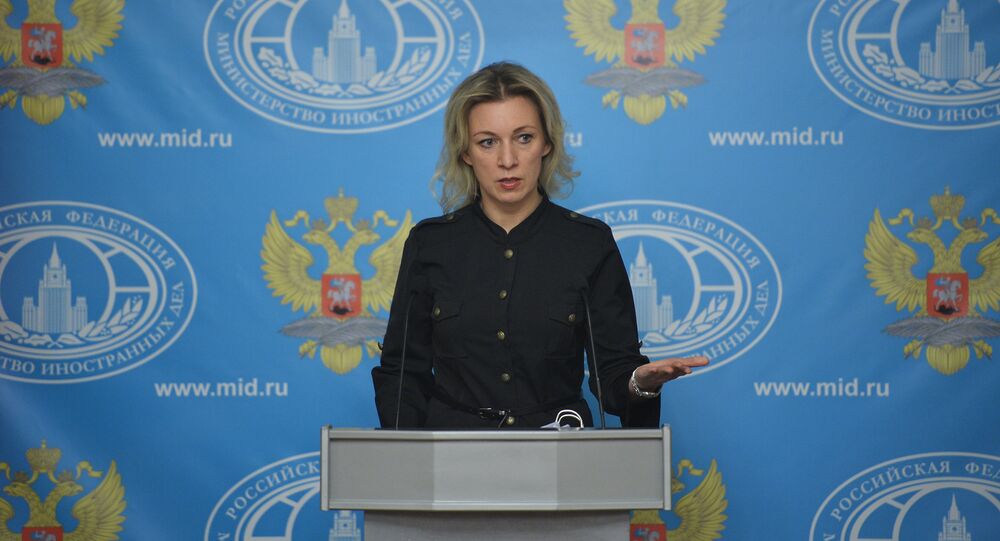 Russian Foreign Ministry spokeswoman Maria Zakharova commented on the downing of a Russian Su-24 bomber by a Turkish F-16 fighter jet over Syria on Tuesday during her weekly press briefing.

© AP Photo / Burhan Ozbilici
'Playing With Fire': Whose Side is Erdogan on in Anti-ISIL Fight?
The Turkish Air Force made no attempts to contact the Russian Su-24 Flanker bomber before it was downed and the aircraft did not cross the Turkish border, Russian Foreign Ministry spokeswoman Maria Zakharova said Thursday.

“According to exact information…our plane didn’t cross the border with Turkey. This is also confirmed by Syrian air defense systems. Moreover, according to radio electronic intelligence from the Hmeymim Airbase, it has become a fact that there was an airspace violation against Syria by the Turkish Air Force plane that attacked [the Su-24],” Zakharova said during her weekly briefing.

Zakharova added that “there were no attempts from the Turkish airplane to contact or establish visual contact with our crew.”

The audio recording of radio exchanges between the Turkish pilots with warnings to the Russian Su-24 aircraft pilots is fake, she said.

"How much [time] did it take to, so to speak, create another masterpiece? Several days?" Zakharova said commenting on the Turkish media spreading the recording.

Su-24 Incident to Affect All Aspects of Russia-Turkey Relations

The downing of a Russian warplane by the Turkish air force will negatively affect all aspects of relations between Moscow and Ankara, Zakharova reiterated.

"As our leaders have already said, the shadow of the tragedy will fall upon all aspects of bilateral relations [with Turkey]."

YouTube/Sputnik
Self-Defense Turkish Style: Shooting Unarmed Parachuting Pilot
On Tuesday, a Russian Su-24 attack aircraft was downed by an air-to-air missile after carrying out precision strikes against terrorists in northern Syria. The missile was fired by a Turkish F-16 fighter in response to alleged violation of the Turkish airspace by the Russian jet.

One of the pilots of the downed Su-24 was killed by fire from the ground after ejecting, while the co-pilot was rescued and returned to the Russian airbase near Latakia.

"These people whom Ankara is attempting to protect using all available, sometimes criminal, methods have no relation to civilians or the civilian population," Zakharova said. "We are talking about armed thugs who, as you saw in the video, shot the Russian pilot and desecrated his body."

The Su-24 incident also claimed the life of a Russian naval infantry soldier, who was killed in the rescue operation.

"We have repeatedly pointed to all sorts of insinuations against alleged civilian casualties as a result of the Russian aviation’s action. I can once again say that all such allegations have nothing to do with reality."

According to her, Russia’s Aerospace Forces are choosing the targets very carefully.

So far, Russian warplanes have destroyed over 3,000 terrorist targets. Several hundreds of militants have been killed, dozens of command centers and depots were destroyed.

The US State Department admits to obtaining its data on Russian airstrikes in Syria from social networks, Zakharova said.

"We are often told when we ask where the information is drawn to condemn Russia, through the State Department in particular, that ‘all of this is on the internet, on social networks’."

The diplomat questioned the credibility of US intelligence, drawing a parallel with social media reports alleging that the family of Turkish President Recep Tayyip Erdogan is involved in the Islamic State  jihadist group’s oil smuggling business.

Presence of US Military Instructors in Ukraine Violates Minsk Accords

The presence of US military instructors in Ukraine violates the Minsk peace agreement and undermines efforts to resolve the ongoing conflict in Donbass, the Maria Zakharova said.

"I'd like to emphasize that the presence of foreign paratroopers and weaponry on the Ukrainian soil blatantly violates the Minsk agreements by Kiev."

"The Americans with their Canadian and Lithuanian partners in NATO have agreed to train a new batch of Ukrainian cadets. It's some five battalions and it's obvious that such actions are not pacifist and do not help the de-escalation," Zakharova stressed.

The annulment of a 1997 deal on Russia-NATO ties could destroy the system of European security, the Russian Foreign Ministry spokeswoman said.

Poland's new Foreign Minister Witold Waszczykowski on Wednesday urged the annulment of the 1997 Russia-NATO Founding Act as it does not reflect the current political realities.

"I sincerely hope that the alliance realizes the long-term negative consequences of the implementation of such an initiative, if it is really an initiative rather than a random thought."

The start of the talks over Montenegro's NATO membership will harm Eurasian and Atlantic security systems, as well as relations between Russia and the alliance, Zakharova said.

"The possibility of NATO taking the political decision of starting talks with Montenegro over its membership in the alliance will be another serious blow dealt by NATO to the system of Euro-Atlantic security… Such a move carries strong potential for confrontation, it is not in the interest of peace in the Balkans and Europe, and it can lead to even more complicated relations between Russia and NATO," Zakharova said.

Montenegro's leadership is anticipating an official invitation to join NATO in early December. The United States has repeatedly stated its willingness to accept Montenegro into the alliance, with US Vice President Joe Biden stating Thursday that NATO's door remains wide open for the Balkan countries. December's decision is to be taken by the NATO foreign ministers summit.

Russia's embassy in Montenegro has repeatedly relayed Russia's position on the matter to the country's leadership, reiterating possible consequences to relations between the two countries. The Russian State Duma addressed other parliaments last Friday, appealing to prevent further NATO expansion.

"We call on all Russian citizens, who are in Belgium, to exercise maximum caution, following the recommendations of the local law enforcement," Zakharova said.

According to the spokeswoman, all Russian establishments in Belgium comply with measures required to ensure safety of their employees and their families.

© Flickr / looking4poetry
Spain Opposition Leader Proposes EU-Wide FBI to Share Intelligence
Belgium remains on high terror alert since the November 13 terrorist attacks in Paris, as a number of perpetrators, including the mastermind Abdelhamid Abaaoud and fugitive Salah Abdeslam, were linked to the country.

A series of coordinated attack in the French capital claimed lives of 130 and injured more than 360 people.

© Sputnik / Alexey Kudenko
Turkish Stream Falls Under Russia's Restrictive Measures Against Turkey - Economic Development Minister
"Extremely detailed talks are planned for November 27 with the head of the Foreign Ministry, Mr. Lavrov. The focus of the talks will be settling the political process with the goal of settling the Syrian crisis," Zakharova said during her weekly briefing.

She said the conditions to begin dialogue between official Damascus and the Syrian opposition needs to be created by the end of the year.

"In line with the understanding reached within the framework of the international group of Syrian support, the needed conditions to begin dialogue between the government of Syria and the Syrian opposition need to be created around the end of this year," Zakharova added.

Sergei Lavrov will attend a foreign ministerial level Organization for Security and Co-operation in Europe meeting in Belgrade December 3-4 to discuss joint efforts in the fight against terrorism.

“The upcoming ministerial meeting will be held on the backdrop of a wave of terrorism that has already practically and factually drowned Europe and the neighboring regions. It’s expected that the OSCE member state ministers will discuss the sources of terrorism and the need to join efforts in the fight against this evil.”

"On December 1-2, Sergey Lavrov will be on a working visit to Cyprus. The program includes a meeting with the country's president, talks with the foreign minister. In addition, talks are planned with the head of the House of Representatives and the head of the Cypriot Orthodox Church," ministry spokeswoman Maria Zakharova announced.

According to Zakharova, the sides will exchange views on Russia-EU relations.