A Russian Sukhoi Su-24 bomber crashed in Syria on Tuesday, with Moscow maintaining that the jet was downed by a Turkish air-to-air missile over the Syrian territory.

MOSCOW (Sputnik) — Moscow firmly denied the allegation that the plane violated the Turkish airspace, warning that the incident might seriously undermine bilateral relations. Russian President Vladimir described the downing of the aircraft as "a stab in the back" performed by "accomplices of terrorists."

Moscow is now evading direct contact with Ankara on the issue, but underlines it is not hostile towards Turkish people, who are not responsible for the incident.

However, Moscow questions the actions of the Turkish government, and does not rule out the bilateral relations would be affected and reconsidered in various spheres.

© REUTERS / Murad Sezer
Turkish Prime Minister: I Gave Order to Shoot Down Russia's Plane Myself
Despite domestic and intentional controversy caused by the downing and numerous statements made by senior officials worldwide, primarily calling for calm and dialogue on the issue, there have not been high level talks between Moscow and Ankara so far.

"There is no dialogue in any form. We currently do not have it," Kremlin spokesman Dmitry Peskov told reporters.

She refuted claims by the Turkish Ministry of Foreign Affairs on the alleged agreement on a meeting of the foreign ministers of Russia and Turkey in the coming days.

The Russian Foreign Ministry is planning to submit proposals to the president on further relations with Turkey, which, according to Lavrov, are not aimed at creating a rift between the two countries.

Russia has been making it clear that it expects an official apology for the downed fighter. However, the relations are far from being a diplomatic row and Moscow's revoking its ambassador from Turkey is currently out of the question, a source in the Russian Foreign ministry told RIA Novosti.

The fact that the Russian side is waiting for an apology from Turkey over the incident involving the Su-24 plane was voiced by Valentina Matvienko, the speaker of the upper house of the Russian parliament.

"We are waiting for an apology from Turkey, for recognition of the illegality of the act," she said. 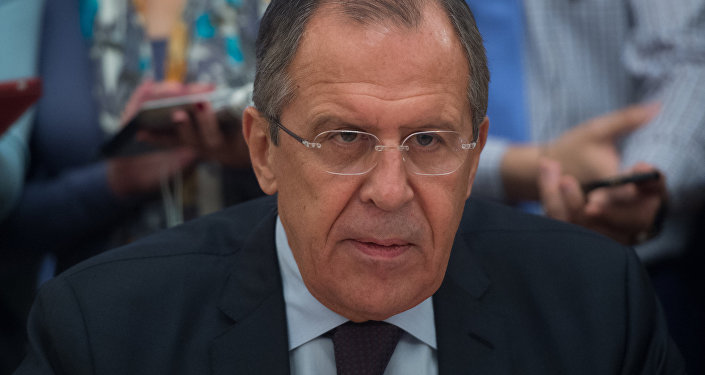 © Sputnik / Maksim Blinov
Lest You Forget: Lavrov Reminds Turkey of Its Involvement in ISIL Oil Trade
According to Matvienko, the incident will obviously and inevitably affect relations between the two countries.

The Russian foreign minister ruled out the possibility of "war" with Turkey, but questioned the performance of the incumbent Turkish government.

"As for the current stage of our relations and the agreements reached with the Turkish government…. of course, as President [Vladimir Putin] previously said, we will seriously reevaluate and rethink everything that is going on in our relationship, in the wake of the attack on our aircraft," Lavrov told reporters.

The Russian top diplomat said that Moscow did not want to artificially create problems in the field of bilateral economic relations.

The service banned entry of over 162 tons of Turkish chicken into the Russian westernmost Kaliningrad Region, citing difference between seal numbers mentioned in the veterinary certificate and the actual numbers on the containers with products.

However, Rosselkhoznadzor said that it was not planning to take additional control over Turkish products.

As for the tourism industry, Turkey, popular with the Russians, is likely to suffer losses amid the incident, as Moscow has recommended Russians to refrain from traveling to Turkey.

Turkey's relations with Damascus are strained, as Ankara supports Syrian opposition parties aiming to displace Syrian President Bashar Assad. The relations between the two countries were also hurt in 2012 when Syrian forces shot down a Turkish fighter jet.

According to experts interviewed by RIA Novosti, one of the possible reasons for Turkey to down the Russian jet was an attempt to weaken Russian anti-terrorist engagement in Syria, where it has been conducting pinpoint airstrikes against terrorist positions since September 30.

But, contrary to Ankara aspirations, Russia seems to have boosted its fight against Islamic State militants in Syria, as the Russian president has ordered to equip the Russian military base in Syria with S-400 air defense systems.

All Russian operations in Syria will be carried out only under the cover of fighter planes.

Moscow also said it supported the idea of​ French President Francois Hollande on the closing of the Turkish-Syrian border to stop "feeding" the militants.

"I think this is the right proposal… Many believe that by closing the border, we will actually stop terrorist threat in Syria," the Russian foreign minister said.

He added that Moscow is now able to raise a question at the UN Security Council on the common understanding on combating channels of supply and financing for militants in Syria.

"Probably, it will even be necessary to deal with certain countries, so that such support is stopped," Lavrov said.

Youtube / Olay Gazetesi
Turkish General Staff Says Shared Data on Su-24 Incident With Russia
Lavrov also said that no common position on the Su-24 downing was established during the meeting of permanent representatives of NATO countries, and the statement of NATO Secretary General Jens Stoltenberg was not literally agreed with all the Alliance members.

On Tuesday, following a NATO extraordinary meeting over the Su-24 incident, Stoltenberg made a statement calling for calm and de-escalation.

He said that he expected further contacts between Ankara and Moscow, and stressed the need to reach and implement agreements on the prevention of similar incidents in the future.

He also said that NATO shared Turkey's "version of events," which has also been allegedly confirmed by the allies.

Commenting on the NATO statement, Lavrov said that Stoltenberg must have taken into consideration only the opinion of leading NATO members and that a number of negative reactions to Turkey's move had been received.