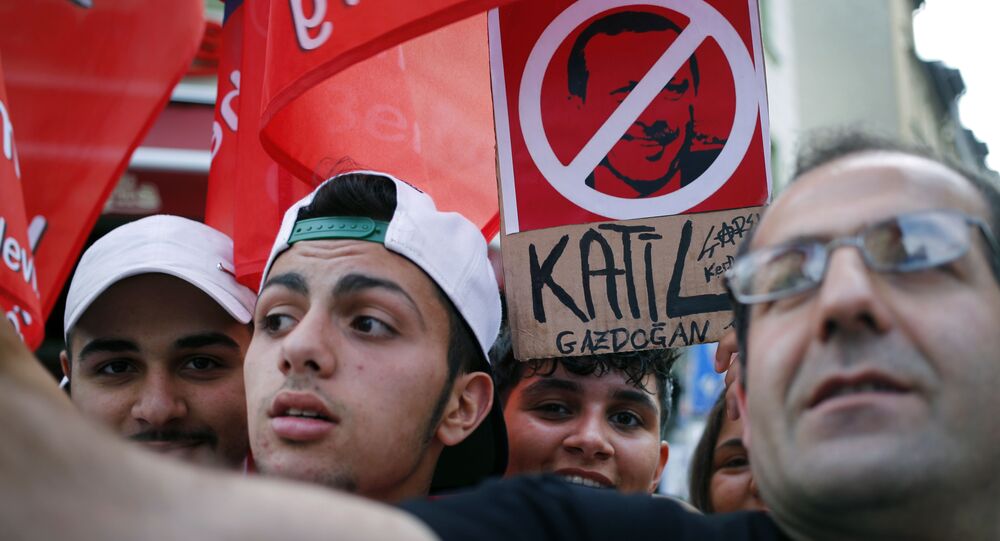 As expected, the F-16 attack on a Russian Su-24 bomber over Syria has become a hot topic for discussion on Turkish social media. Taking a peak at both the Turkish and English-language corners of the Twitterverse, Sputnik discovered that not only are many Turks upset over the incident, some are downright outraged over their government's actions.

With the Turkish Air Force attack on the Russian plane in Syria instantly provoking a swelling response of debate and condolences from both Russian and foreign social media users, Turkish social media users naturally joined in. But in a surprising twist, many offered apologies to their northern neighbor, emphasizing that it is the Recep Erdogan government, not the Turkish people, who should be blamed for the attack.

Some users appealed directly to their Russian friends, using the Russian-language hashtag #StabInTheBack.

#УдарВСпину As a Turk I apologize for Turkish gov. action today for shooting down the #Russia 's fighter jet, a lot of Turks on your side

​Others responded elsewhere, in other forms, one user even appealing to the Russian prime minister. Many emphasized that they were "ashamed" over their government's actions, placing the blame squarely on the Erdogan government.

#IStandWithRussia as a Turkish citizen, sorry for the brave pilots who were fighting against #ISIS terrorism.

@MedvedevRussiaE Sorry from a Turkish citizen..

@russian_market İ am a Turk and truly sorry and ashamed about what was happened today.I even cried for the pilot.May he rest in peace.

As a Turkish man I feel ashamed about my countrys situation right now. #Russia #Turkey

@zerohedge I am Turkish and I am ashamed to see our "sultan" deciding to shoot down a Russian jet trying to destroy "rebels"! I am sorry!

@PutinRF_Eng i am Turkish but i support Putin, so are many friends of me, but %65 of Turks believe in Erdogan and his islamic aims:(

Others still took a wider view of the situation, suggesting, as a few experts have also done, that Erdogan may not have acted alone:

i am turk yes we just did given from NATO mission.We dont have stand-alone control. https://t.co/N3tPTOLuyl #Russia pic.twitter.com/0RYkBvmUYk

On English-language Twitter, a debate broke out over the Turkish government's charge, publicized by WikiLeaks, that the Russian plane had flown into Turkish airspace, and their claim that the military had warned the plane ten times over five minutes to change their trajectory.

The same debate broke out on Turkish Twitter, with Sputnik picking up on one such exchange, involving Meydan Gazete journalist Turgay Ogur:

"Some details have been made available," Ogur writes. "The plane was approaching the Turkish border, and was warned ten times over the course of five minutes. Our airspace was violated for 17 seconds."

With Ogur admitting that "of course he would have been in Damascus" by then, Demir Ok noted that what she can't "understand how a plane which had violated our airspace for only 17 seconds could have been warned over the space of five minutes?"

Posting the famous images supposedly showing the plane's flight trajectory, a user named Ibrahim Kalin commented that "the data from radar observations of the movement of the downed plane clearly show that, despite warnings, it had violated our airspace."

Responding to Kalin, and the images, a user named hakaneren sarcastically asked: "And American planes, tanks, convoys aren't violating our border? Tomorrow the Russians will up and shut off our gas supplies; then you'll have your violation."

Others took another tack, focusing their criticism on what they felt was the "erratic" and "dangerous" foreign policy approach of the Erdogan government.

"What I got out of Erdogan's speech: the Russian plane was shot down not because it had violated our airspace, but because Russia has struck the Turkmen." (a group of Turkish-trained rebels fighting in Syria against Damascus)

"The foreign policy of the AKP in brief: 1. The downing of the plane shows that the country can be dragged into any war. 2. The Turkmen are a marvelous pretext for supporting the jihadists."

"I believe we are faced, in terms of both domestic and foreign policy, with the most dangerous authorities in the country's history, because it is impossible to predict what they might do next."

Ultimately, this outpouring of support from many Turks for Russia and the Russian pilots is an important reminder that whatever mistakes a government might commit, the offended side should never make the mistake of conflating a nation with its wayward leaders.