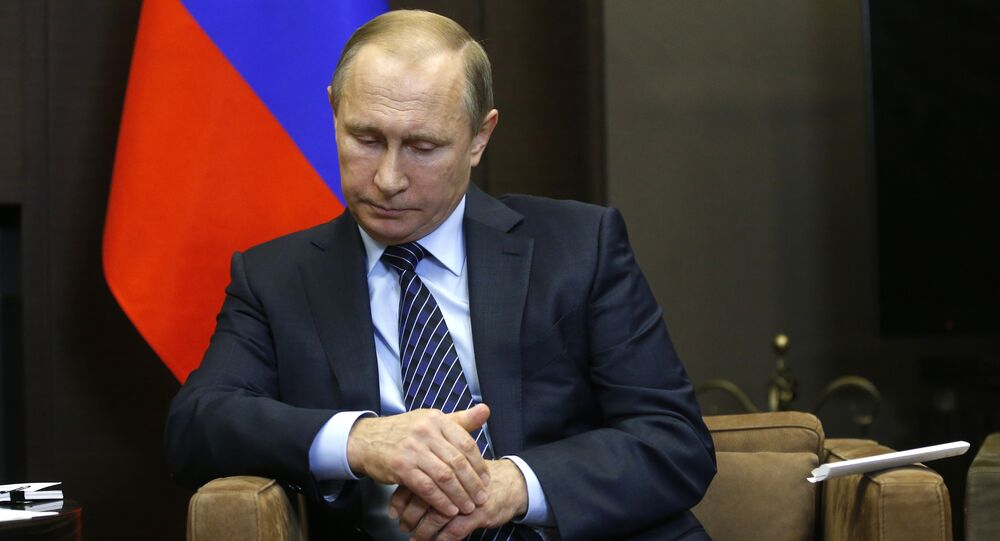 On Tuesday, Russian President Vladimir Putin reacted to the Turkish downing of a Russian Su-24 bomber jet operating in Syria by calling it a "stab in the back." Since then, Russian social media users have joined the president in expressing their anger over the attack, quickly spreading the Russian-language hashtag #StabInTheBack.

Speaking with Jordan's King Abdullah II in Sochi on Tuesday, the Russian president expressed his outrage over the downing of a Russian bomber jet operating in Syrian airspace by Turkish fighter aircraft, describing it as nothing short of a betrayal.

"This event goes beyond the fight against terrorism… Today's loss is related to a stab in the back, carried out against us by accomplices of terrorists. I cannot describe what happened today in any other way," Putin emphasized.

Since then, Russian social media have joined Russia's president in expressing anger over the attack, popularizing the Russian-language hashtag #StabInTheBack.

"The audacity! Why did they shoot down our plane? If this is not support for terrorism, what is?"

"Having stabbed us in the back, Turkey has factually supported the terrorists striking terror into Europe."

"I now await sanctions from the Russian President. He has already spoken out strongly about this. Now we await the consequences."

Traditionally a very popular tourist destination for Russians, many Twitter users suggested that people should now boycott visiting Turkey in the coming year.

"I think that the 2016 tourist season in Turkey for Russian tourists will end today…before it even began." — Nikolai Starikov, Russian pop historian and political commentator.

"Magnet from our Turkey trip promptly goes into the wastebasket."

Many users couldn't help but suggest that the attack demonstrated Turkey's association and even support for the terrorists Russian forces are fighting in Syria.

The tweets also included emotional appeals about the purpose of the Russian mission in Syria, and the feeling of betrayal felt on a mass scale over Turkey's actions:

​Woman picketing in front of the Turkish Embassy in Moscow. Poster reads: "The pilots who were shot down were killing the terrorists to prevent civilians, ours and yours alike, from being killed."

Tweet: "History is repeating itself. 100 years on, Turkey has once again betrayed its allies."  Putin Quote: "I understand that every country has its own regional interests, and we have always respected that. But we shall never tolerate crimes like today's incident." (Excerpt from the President's meeting with the Jordanian King).

Others allowed their anger to get the best of them, recalling old historical wounds, from Russian battles with the Ottomans over Constantinople, to Turkey's cooperation with the Nazis during World War II.

Others simply sent condolences to the pilots, one of whose photos are believed to have leaked.

Many English-language commentators from around the world joined their Russian counterparts in condemning the attack, with some fearing that the move could spark World War III, and others pointing to Ankara's long support for anti-Syrian and anti-Kurdish groups in Syria.

Others spoke of the wider implications of the attack, or at least did the best they could to lighten the mood amid the tense situation.

So Putin and Erdogan walk into a bar. Sorry, a war.

If #Russia was hesitant to attack the so called moderate terrorists till now, they will not be anymore. #stabintheback

Journalist and Broadcaster Neil Clark offered his own critical commentary, asking his readers to conduct a little thought experiment:

Imagine neocon reaction if Russia had shot down a Turkish plane. But it's NATO member Turkey shooting down a Russian plane-so let's move on.

The journalist's tweet sparked a vivid reaction of its own:

@NeilClark66 there many faces behind this one is revealed officially there are others to be revealed pic.twitter.com/lGI5NzfklR

With WikiLeaks leaking Turkey's letter to the UN Security Council over the incident, English-language users also joined with their Russian counterparts in tearing the details on the incident to shreds, particularly Ankara's claims that the Russian aircraft, allegedly violating Turkish airspace for 17 seconds, had received 10 warnings over the space of 5 minutes.

If this flight path provided by Turkey is correct, it would take literally seconds for a SU-24 to pass through there pic.twitter.com/8DbDbYHIoU

At it's SLOWEST speed, 150mph, the Russian SU-24 would have been in Turkey for 15 seconds. 10 warnings in 5 minutes seems untrue to me

Assuming that an SU-24 covers 4 km in 9-12 seconds at 900 km/h cruise speed, we may risk saying that Turkey was waiting for such situation

Among all the anger and emotion spilling out on the twitterverse, particularly among Russian users, one important message almost got lost in the fray:

#УдарВспину As a Turk, I apologize to Russia for the Russian plane attacked by Turkey close to the Syrian border. AKP government is guilty.

​It's a sentiment Sputnik thinks is worth emphasizing, and one likely to find support among many Turkish people, their government's actions aside.

"Explaining things in a visual way." (Hashtags #StabInTheBack in Russian and Turkish)