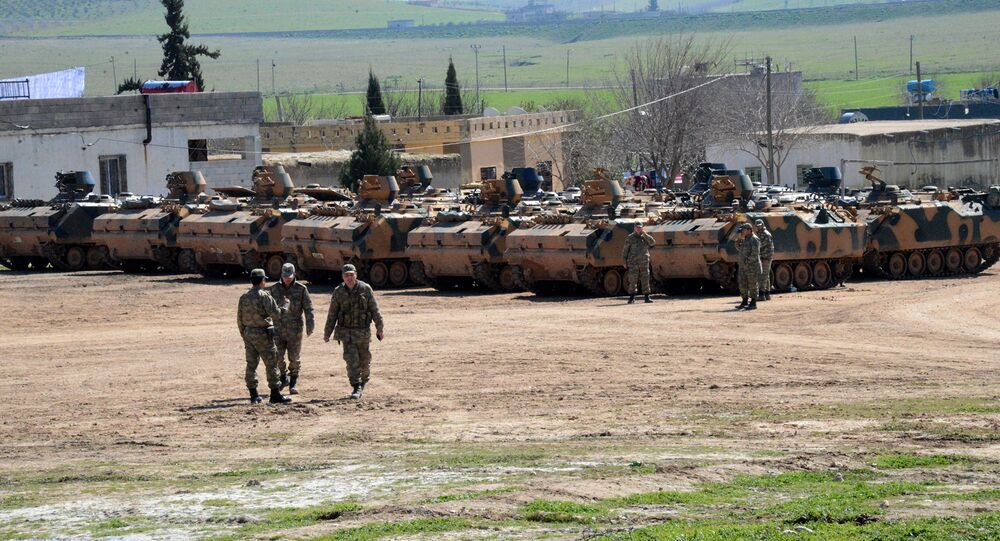 The US and Turkey have announced an operation aimed at maintaining control over the last 98 kilometers of the Turkish-Syrian border, between Jarabulus and Afrin; this area overlaps with the primary corridor through which Islamists, including ISIL and al-Nusra receive weapons and fighters, Tony Cartalucci underscores.

In contrast to its vows to "defeat ISIL," the actions of the US-led anti-ISIL coalition demonstrate a desire to preserve the terrorist group, Bangkok-based geopolitical analyst Tony Cartalucci notes.

"Its [NATO's] feigned 'war on ISIS' helped open the door to the recent Russian military intervention. With Russia's entry into the war, the West can no longer afford to drag out its nonexistent operations against ISIS [ISIL], hoping for an opportunity to finally divide and destroy the country," Cartalucci writes in his recent piece for New Eastern Outlook.

© REUTERS / Social Media Website via Reuters
Siding With ISIL? Turkey Spotted Dealing With Radical Islamists in Syria
Meanwhile, Russia and the Syrian Arab Army have almost sealed up the corridor themselves. In its turn NATO is at pains to implement a partial occupation of Syria. According to the analyst, the race is nearly over now.

Cartalucci points out that the terrorist attack in Paris has given NATO a "strong hand" and will most likely help the US and Turkey justify their upcoming military operation in northern Syria.

However, "the fact that the US and Turkey are seeking to secure Turkey's border with Syria from the Syrian side instead of within NATO territory itself, reveals the true nature of this unfolding conflict," the analyst remarks, adding that the operation will be de facto an invasion of Syria by NATO.

Western officials insist that the operation would cut off one of ISIL's lifelines. Surprisingly, for a few years they remained suspiciously silent on the flow of arms, fighters and money which have been flowing to the Islamic State through Turkey.

"All of the Paris attackers, likewise, passed through Turkey on their way to train, arm, and fight in Syria, and then through Turkey again on their way back to Europe. The tons of weapons and hundreds of fighters shipped covertly to Syria by the US in the Libyan terrorist capital of Benghazi also arrived first in Turkish ports before proceeding on, apparently with the knowledge and cooperation of the Turkish government," Cartalucci stresses.

© AFP 2020 / YOUSSEF KARWASHAN
Mysterious Middleman: Who is Buying ISIL's Crude and Dropping Oil Prices?
In this light, if one really wants to cut off ISIL's lifelines, he should start doing this in Turkey, the analyst suggests.

Much in the same manner Saudi Arabia, Qatar and other Gulf realms have been supporting and funding terrorism in Syria and Iraq since the very beginning of the Syrian war. The Gulf States also constitute the "source" of ISIL, Cartalucci points out.

However, none of these states were sanctioned for their illicit activities. Instead, major Western powers were concluding lucrative weapons deals with the Gulf monarchies.

© AFP 2020 / Fadi al-Halabi
Western Gov'ts Create 'Perfect Climate' for Terror by Funding Extremists
"Fighting ISIS [ISIL] at its source, for the West, means putting the blade to its own throat," the analyst stresses.

According to Cartalucci, Western governments are "clearly responsible" for the rise of the Islamic State. The notorious Islamist group has emerged not just as a mere consequence of the West's action or inaction: the group has been created though the intentional effort of the Western political establishment. Western policymakers plan to use Islamists as a "formidable proxy army" in the Middle East, North Africa and beyond, Cartalucci believes.

"ISIS [ISIL] is not only destined to divide and destroy Syria and Iraq. If the West has its way, the terrorist organization is destined to move into Iran, the Caucasus region of southern Russia, and Central Asia next," he predicts.

The idea to create an Islamist army is not a new one, Cartalucci remarks, referring to the US-Saudi collaboration with Islamic radicals in Afghanistan in the 1980s and British Empire's use of Wahhabi fanatics in its war against the Ottoman Empire over a century ago.

"When the West calls this a 'long war,' they mean it. And it will be longer still until the people of the West realize their governments aren't waging a 'War on Terror,' they are waging a 'War of Terror'," the geopolitical analyst emphasizes.