Obama, Hollande to Discuss Counterterror as US Frets Over Russian Maneuvers

US President Barack Obama is set to meet with French President Francois Hollande in Washington, DC on Tuesday to discuss counterterrorism efforts while at the same time France and Russia vow to work more closely together in the fight against the Islamic State, stirring angst among White House officials.

WASHINGTON (Sputnik) — On November 13, eight extremists wearing explosive belts attacked several venues across Paris, killing some 132 people at restaurants, the Bataclan concert hall and in the vicinity of the Stade de France stadium. 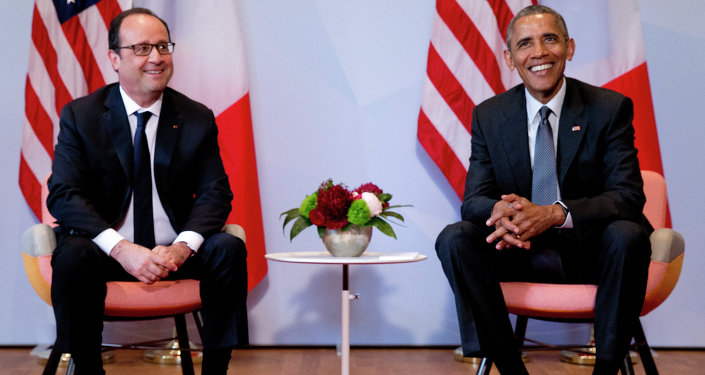 © AP Photo / Carolyn Kaster
Is Washington Trying to Play France’s Hollande Like a Pawn Against Moscow?

Hollande is conducting an intensive diplomatic tour to shore up counterterrorism support in response to the terrorist attacks in Paris.

On November 26, two days after Hollande’s visit to Washington, DC, the French President is scheduled to meet with Russian President Vladimir Putin in Moscow where they hope to reach an agreement on coordinating anti-Islamic State military operations in Syria.

White House officials are worried that Putin will attempt to persuade Hollande to lift Ukraine-related sanctions on Russia in exchange for Moscow intensifying its campaign against the Islamic State, Politico reported on Monday.

© Sputnik / Dmitry Vinogradov
US Does Not Plan Russian Sanctions Relief for More Efforts Against ISIL
Meanwhile, the United States, according to the White House, has no plans to offer sanctions relief to Russia in exchange for a greater contribution in the campaign against the Islamic State.

Obama and Hollande are expected to focus on "the way forward" to destroying the Islamic State along with protecting their citizens from the threat of terrorism.

The two leaders will also cover the resolution of the conflict in Syria, according to the White House.

Moreover, Hollande is likely to raise the issue of bridging the divide between the United States and Russia on anti-terrorism operations in Syria.

On November 16, Hollande called for a broad coalition that included the United States and Russia to defeat the Islamic State.

A day later, Russian President Vladimir Putin said Russia and France's navies must develop a joint plan of action for their operations in Syria.

French Prime Minister Manuel Valls told the lower house of parliament that the attacks in Paris have changed the positions of Americans and Russians.

In addition to Obama and Putin, the French President met with UK Prime Minister David Cameron on Monday and will meet with German Chancellor Angela Merkel by the end of the week.

On Monday, French fighter jets struck at Islamic State targets in Iraq from an aircraft carrier in the eastern Mediterranean, the French Defense Ministry said.