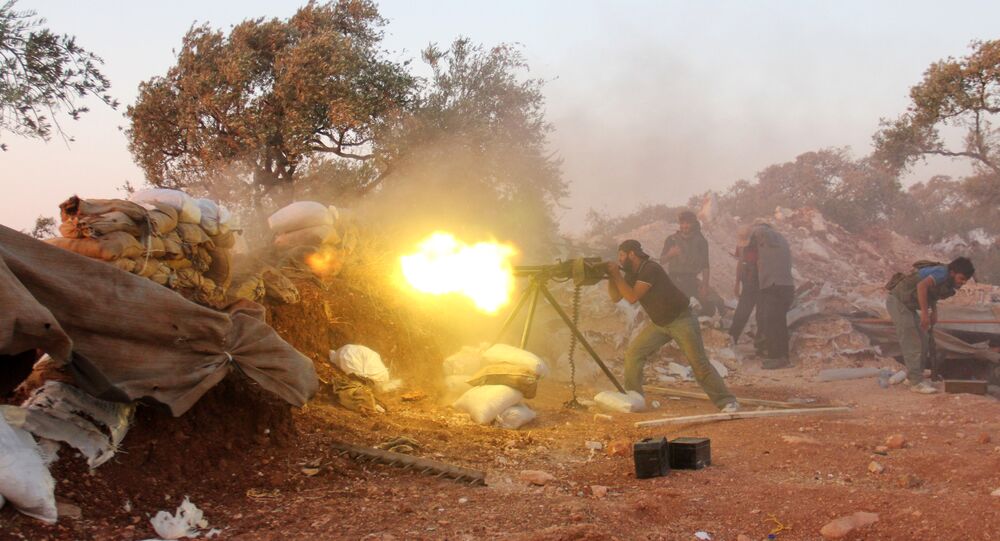 The US-led anti-ISIL coalition's failure is not a matter of inconsistent strategy or poor planning, New York-based geopolitical analyst Ulson Gunnar remarks, adding that it looks like Washington and its allies have been involved in "feeding" ISIL, not fighting it.

It is no secret that Washington along with its NATO and Gulf allies has been arming and training Syrian militant groups, however, the question arises whom exactly they have been supporting and funding.

"Going from Syria itself, outward according to geographical proximity, we can trace ISIS' [ISIL] support all the way back to Washington itself. And as we do, efforts like the 'talks' in Vienna, and all the non-solutions proposed by the US and its allies, appear ever more absurd while the US itself is revealed not as a stabilizing force in a chaotic world, but rather the very source of that chaos," New York-based geopolitical analyst Ulson Gunnar writes in his recent article for New Eastern Outlook.

rusplt.ru
To Defeat ISIL, Europe Should Remember Its 'Original' Terrorists
Incredibly as it may seem, Washington has had no scruples about "arming" Jabhat al-Nusra, also known as al-Qaeda in Syria, the analyst notes.

Although so-called "moderate Syrian rebels" have been regularly defecting to al-Nusra or redistributing their weapons and equipment to the infamous al-Qaeda branch, Washington continues to drop tons of weapons in desolate Syrian deserts for the "opposition."

At the same time, Washington policymakers have insisted that al-Nusra was "at odds" with ISIL.

However, contrary to this narrative, ISIL (also known as al-Qaeda in Iraq) and al-Nusra "still fight together on the same battlefield toward the same objectives," Gunnar points out.

To complicate matters even further, Washington's close NATO ally, Turkey, has long served as a safe haven for Syrian "rebel-terrorists."

Ankara turned a blind eye to "a steady stream of supplies, weapons and fighters [that] have been pouring over the border, provided by the Persian Gulf monarchies (Saudi Arabia and Qatar in particular)."

There is also evidence that Turkish officials could have been involved in ISIL's oil smuggling operations, the analyst notes.

have any of the oil smugglers in Turkey who buy oil from ISIS, or faciliated oil deals with ISIS, been arrested?

Is it possible that the Turkish government is completely unaware of what is going on at the Turkish-Syrian border? Unlikely, Gunnar believes.

"That the US is still working openly with Turkey despite increasing evidence that Turkey itself is sustaining ISIS [ISIL] in Syria, indicates that the US itself is also interested in perpetuating the terrorist group's activities for as long as possible/plausible," he underscores.

© AFP 2021 / YOUSSEF KARWASHAN
Mysterious Middleman: Who is Buying ISIL's Crude and Dropping Oil Prices?
Besides the Gulf States and Turkey, there are a number of America's Eastern European partners and allies who have been spotted collaborating with Syrian extremists.

For instance, according to some reports Saudi Arabia was purchasing arms in Croatia and then transferring them through Jordan and Turkey to Syrian insurgents, Gunnar notes, suggesting that these weapons ended in al-Nusra and ISIL's hands.

Additionally, the US-backed Ukrainian authorities could have also been involved in delivering weapons to Syrian terrorists, the analyst remarks, referring to the case of Lebanese citizen Osama Khayat who reportedly purchased weapons in Ukraine for some Syrian "militant" group.

"Perhaps readers notice a pattern. Washington is using its vast global network and allies to arm and fund terrorists in Syria, supported by massive logistical networks flowing through Turkey and to a lesser extent, Jordan," Gunnar explains.

"And all of this brings us back to Washington itself."

© AP Photo / Daniel Ochoa de Olza
Those Who Fuelled Extremism in Syria 'Now Mourn Paris Attack Victims' - US Columnist
Citing the Defense Intelligence Agency's (DIA) 2012 report, Gunnar remarks that the US policymakers since the very beginning knew that the major forces driving the Syrian insurgency were Salafist fighters, al-Qaeda in Iraq and the Muslim Brotherhood.

"If the situation unravels there is the possibility of establishing a declared or undeclared Salafist principality in eastern Syria (Hasaka and Der Zor), and this is exactly what the supporting powers to the opposition want, in order to isolate the Syrian regime, which is considered the strategic depth of the Shia expansion (Iraq and Iran)," the report reads.

So, it seems that the creation of the Salafist principality or, in other words, the Islamic State, could have been a part of the strategy, pursued by Washington and its allies, Gunnar believes.

"While Russia attempts to reach westward to piece together an inclusive coalition to finally put an end to ISIS, it is clear that it does so in vain. Washington, Brussels and their regional allies in the Middle East have no intention of putting an end to ISIS," the geopolitical analyst concludes gloomily.