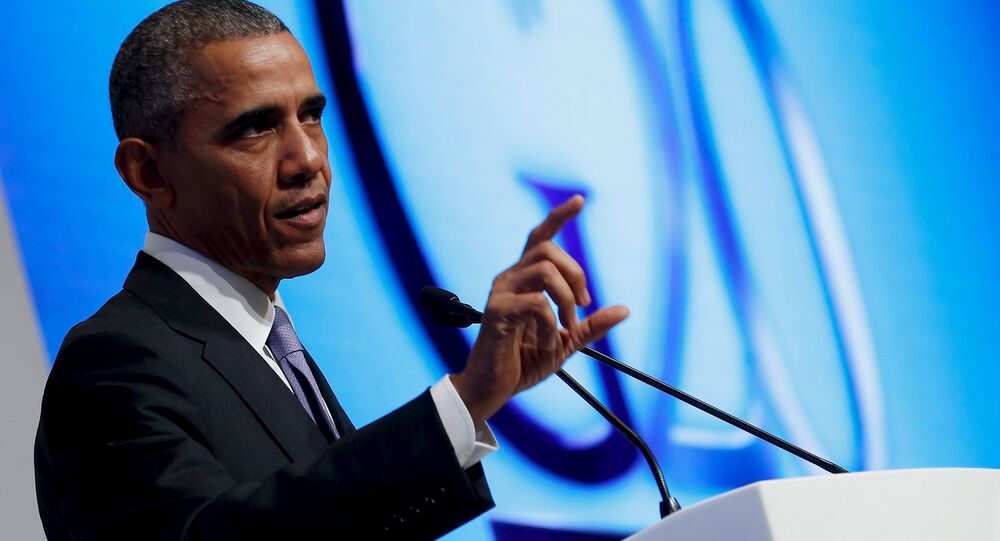 US President Barack Obama has long been criticized for not being "tough" enough, especially today, after the hideous Paris massacre; however, equations between being tough and exercising leadership are completely flawed, former US CIA analyst Paul Pillar points out.

"Mr. Obama, to his credit, is not adjusting his course in response to the current pressure to make the pseudo-tough move of significantly escalating US military operations in Syria to battle the so-called Islamic State or ISIS, beyond the current carefully targeted airstrikes and the small Special Forces contingent that is already there," Pillar emphasized in his article for Consortiumnews.com.

© AP Photo / albaraka_news, File
Why is Washington Turning Blind Eye to ISIL's Gulf Funding Sources?
There are a number of reasons why Washington should not expand its military campaign in Syria and Iraq.

First of all, the elimination of an ISIL "mini-state" won't guarantee that other Islamic extremist individuals or groups will halt their terror actions in Western cities, the former CIA analyst remarked.

According to Pillar, there has been no evidence yet that the Paris assault was orchestrated by Islamic State. ISIL's after-the-fact claim statement is not the evidence, he stressed.

"If there is any evidence of an order from an ISIS [ISIL] high command in Raqqa to conduct this operation, we in the public have not been told about it," Pillar wrote.

© AP Photo / Carolyn Kaster
Regional Hegemon: Saudi Arabia 'Playing Dirty' in Middle East
At the same time, "an expanded US-led military operation" would play into the hands of those radicals who continue to promote the narrative of the Christian West cracking down on the Middle Eastern Muslim nations.

Furthermore, "an expanded US-led military expedition expands the radicalizing resentment, and the resulting recruiting ability of ISIS and extremist groups, from collateral damage from the military operations," the former CIA officer pointed out.

According to Pillar, by eradicating ISIL Washington would leave "the sort of chaos" that will result in further radicalization.

So far, Barack Obama should not indulge warmongering US hawks who urge the president to launch the US-led ground war in Syria and bomb it out.

"We can retake territory. And as long as we leave our troops there, we can hold it, but that does not solve the underlying problem of eliminating the dynamics that are producing these kinds of violent extremist groups," Obama told journalists at his press conference in Turkey as quoted by Pillar.

With 14 months left of his presidency Obama should refrain from costly all-out military action in Syria. Obviously, he must feel tempted to beef up the US military presence in the region, but he is "showing enough responsibility and true leadership not to do anything like that," Pillar concluded.

Next Terrorist Plot in France Hard to Detect - Ex-CIA Officer