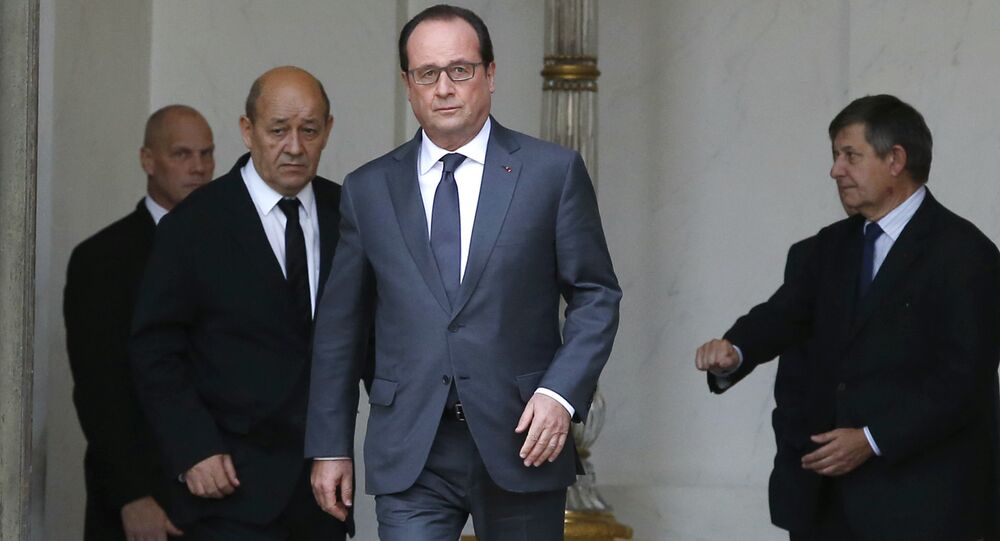 French President Francois Hollande said Wednesday that a broad coalition with the participation of Washington and Moscow should be formed to fight against ISIL.

The French leader also said that he is going to discuss the coordination of efforts in the fight against ISIL with US President Barack Obama and Russian President Vladimir Putin.

"Next Tuesday I will visit Washington and on Thursday [I will arrive in] Moscow to discuss with Barack Obama and Vladimir Putin the coordination of our efforts to work together to achieve this goal [victory in the fight against ISIL] as soon as possible. We need to form a broad coalition that will be able to deliver a decisive blow," Hollande said speaking at a congress of French mayors.

© AP Photo / ECPAD
France Blasts ISIL Targets in Third Night of Airstrikes on Syria’s Raqqa
Hollande is scheduled to travel to Moscow on November 26, where he will attempt to bridge a US-Russian divide on anti-terrorism operations in Syria during talks with President Putin. The French leader will speak with US President Barack Obama during a visit to the United States on November 24.

The special operation in the Parisian suburb of Saint Denis proves that France is currently "at war with terrorism," Hollande said on BFMTV television.

"The events in Saint Denis reaffirm that we are in a state of war, a war with terrorism, terrorism that drove us to war. This terrorist organization, the Islamic State, has weapons, finances, oil resources and territory. It has allies, including some in our country."

Saint Denis is a densely populated northern suburb near the football stadium where two suicide bombers killed themselves and a bystander on November 13. The attacks were followed by a series of mass shootings and suicide bombings at a concert hall and restaurants, killing 129 and injuring over 350.