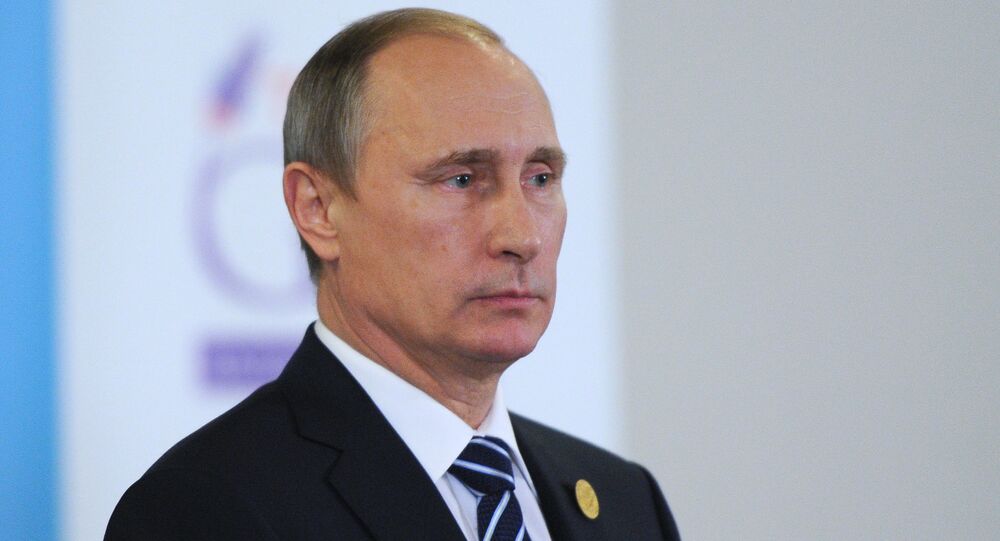 Putin said at the G20 summit that Russia has presented examples of terrorism financing by individual businessmen from 40 countries, including from member states of the G20.

"I provided examples related to our data on the financing of Islamic State units by natural persons in various countries. The financing comes from 40 countries, as we established, including some G20 members," Putin told reporters following the summit.

The fight against terrorism was a key topic at the summit, according to the Russian leader.

"This topic (the war on the terror) was crucial. Especially after the Paris tragedy, we all understand that the means of financing terrorism should be severed," the Russian president said.

"I've demonstrated the pictures from space to our colleagues, which clearly show the true size of the illegal trade of oil and petroleum products market. Car convoys stretching for dozens of kilometers, going beyond the horizon when seen from a height of four-five thousand meters," Putin told reporters after the G20 summit.

The Russian president also said that Syrian opposition is ready to launch an anti-ISIL operation if Russia provides air support.

"A part of the Syrian opposition considers it possible to begin military actions against ISIL with the assistance of the Russian air forces, and we are ready to provide that assistance," the Russian president said.

If this happens, the army of Syrian President Bashar Assad, on the one hand, and the opposition, on the other hand, will fight a common enemy, he outlined.

Cooperation With the US

Russian President Vladimir Putin said Monday that the United States has shown a certain willingness to resume cooperation with Russia in several areas.

"It seemed to me that, at least at an expert level, at the level of discussing problems, there was, indeed, a clear interest in resuming work in many areas, including the economy, politics, and the security sphere," Putin told reporters.

Vladimir Putin said that Russia needs support from the US, Saudi Arabia and Iran in the fight against terrorism.

"It's not the time to debate who is more effective in the fight against ISIL, what we need to do is consolidate our efforts," president Putin added.

The Russian president hopes that the work with the G20 colleagues in the fight against terrorism will continue.

© Sputnik / ALEXEI NIKOLSKY
Putin, Cameron Stress Cooperation in Fight Against Islamic State Only Option
The work to create the list of terrorist organizations in Syria is being carried out on the level of foreign ministers, Russian President Vladimir Putin said Monday.

"With regard to Syria, here we should, first of all, decide, and now the foreign ministers are working on this, what groups we consider to be terrorist organizations, and which can be attributed to the armed, but still ‘healthy’ part of the Syrian opposition," Putin told reporters following the G20 Summit in Antalya, Turkey.

© Sputnik / Maxim Grigoryev
Paris, A321 Crash 'Bear Hallmark of Islamic State' - CIA Director
Answering the question about A321 crash in Sinai, the Russian plane crash in Egypt are still being considered, and it is too early to draw a final conclusion, Russian President Vladimir Putin said Monday.

"With regard to the crash of our airplane: this is hugely painful for all of us, for the entire Russian people, whatever the cause may be," Putin told reporters.

"All versions are being considered. Final conclusions can be made after examinations have been carried out and completed. What examinations? If there was an explosion, traces of explosives must remain on the airliner, on passengers' belongings," the president added.

Russia has proposed Ukraine a better option for its $3 billion debt than just moving the pay date, as suggested by the IMF, Russian President Vladimir Putin said Monday.

"In order not to put Ukraine in a difficult situation, we made, I believe, an unexpected offer to our partners. We not only agreed to the restructuring of Ukraine's debt, but we offered better conditions than the International Monetary Fund asked for. We were asked to move the payment to next year, I said that we were ready for a deeper restructuring," Putin told reporters.

UK-Russia Relations 'Not Best,' Countries Must Learn to Cooperate - Putin