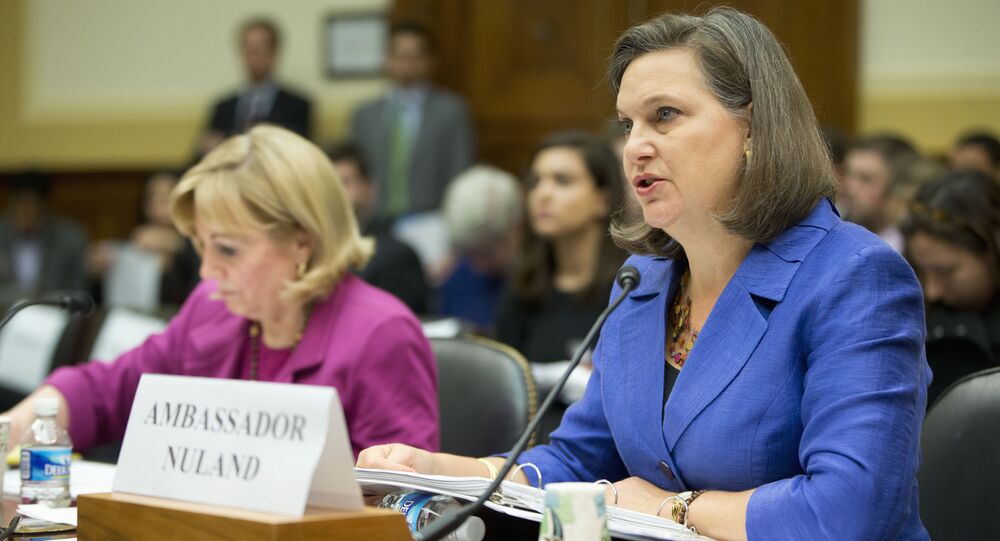 'It's All Putin's Fault': US War Party Ruining Russo-American Relations

It seems that the US war party's primary goal is to forever ruin US-Russian relations, former advisor to the US-Russia Presidential Commission at the US State Department James Carden notes.

A hearing held by the House Foreign Affairs Committee last Wednesday has indicated clearly that the US war party is determined to drive a wedge between the United States and Russia, according to James Carden, a Washington-based expert and former advisor to the US-Russia Presidential Commission at the US State Department.

"The war party's stand, or goal, is to forever ruin US-Russian relations. But rather than being preoccupied by Russia's much-decried invasion of Ukraine, it is now focused on Russia's 'escalation' over Syria," Carden pointed out in his article for the Nation.

© AP Photo / Kerstin Joensson
Ticking Clock: European Civilization on the Brink of Extinction?
"The committee heard the testimony of two assistant secretaries of state, Victoria Nuland, under whose purview Russia falls, and Anne Patterson, who has the unhappy responsibility for overseeing American policy in North Africa and the Middle East," the former US official narrated.

Rather predictably, the two assistant secretaries of state missed no opportunity to place all the blame for what is going on in Syria, including the refugee crisis, on Russia. Needless to say, neither Nuland, nor Patterson provided any evidence to confirm their accusations.

"Russia's new direct combat role in Syria has exacerbated an already dangerous refugee outflow, straining even the most generous Europeans' ability to cope," Nuland said, as quoted by Carden.

In her turn, Patterson even went so far as to claim that "85-90 percent of the [Russian] strikes are aimed at non-ISIS opposition."

"About the mythical 'moderate' Syrian opposition, Patterson was asked if we are 'in coalition building' with al-Nusra? Patterson conceded that it is possible that some of our 'moderate' opposition forces 'were forced to join' them. Sure," the American expert remarked with a trace of irony.

To complicate matters further Patterson insisted "with a straight face" that ISIL and Bashar al-Assad "are linked."

© AFP 2020 / POOL / CAROLYN KASTER
Proxy War on Two Fronts: How Far Will US Hawks Go to Maintain Dominance?
"Could she possibly believe this? It would certainly come as news to Assad, among others," Carden added.

Incredible as it may seem, some of this nonsense was eagerly swallowed by several members of the committee.

"The war party's refrain remains the same: 'It's all Putin's fault'," the former official stressed.

And still there is light at the end of the tunnel, Carden believes, referring to the fact that later that afternoon Professor Stephen F. Cohen, Professor Ellen Mickiewicz, Ambassador Jack Matlock, and former Procter and Gamble CEO John Pepper "urged Congress to eschew a deeply prejudicial approach to Russian relations."

The expert posed the question: if the US intelligence sources are right, and Russia's Metrojet Flight 9268 was downed by ISIL, doesn't that mean that Russia and the United States are now in the same boat?

"If so, might it finally dawn on the American political establishment that perhaps the United States and Russia are in this fight together?" James Carden asked.