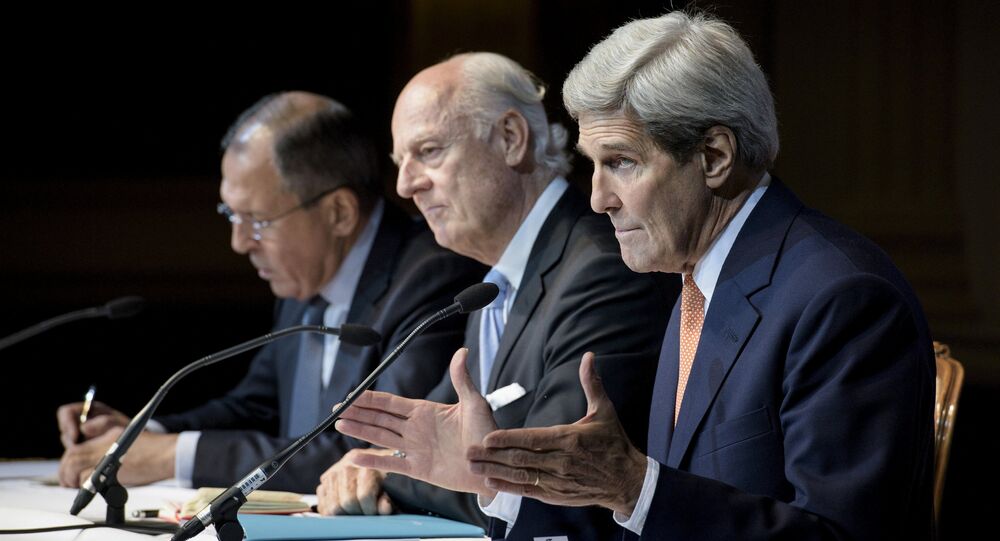 No solution will be found during the upcoming round of talks on the Syrian issue planned for November 14 in Vienna, Elena Suponina, an adviser to the Director of the Russian Institute for Strategic Studies, told RIA Novosti.

"It won't be the last meeting of such a format. Like last time, many controversial issues won't be resolved," Suponina told RIA Novosti.

© AP Photo / Burhan Ozbilici
Turkey Foreign Minister to Attend Vienna Talks on Syrian Reconciliation
On October 30, top diplomats from about 20 countries, comprising Russia, the United States, Saudi Arabia and Turkey, as well as many other officials, met in the Austrian capital of Vienna to discuss efforts to end the four-year civil war in Syria. However, representatives of the current Syrian government weren't present at the meeting and subsequently no working solution came out of it.

Just like the last time, one of the most pressing issues that likely won't be resolved during the upcoming meeting is the future of Syrian President Bashar al-Assad.

"Russia hasn't changed its position [on al-Assad]. However, Moscow is being active and would propose a series of concrete proposals, such as holding of early parliamentarian and presidential elections in Syria in 2016. I wish the United States and its allies were more active on this issue," Suponina said, as cited by RIA Novosti.

Russia wants to put a hold on the al-Assad issue and focus on negotiating a ceasefire and trying to build peace in Syria during the upcoming talks in Vienna. However, Washington and some of its allies aren't willing to do that, making it look like they aren't really interested in solving the Syrian crisis, the political expert added.

Another hot topic during the talks will be various factions of Syrian opposition forces. The opposition is so fragmented that nobody knows who would be an official representative of various rebel groups.

© AP Photo / Jake Simkin
US Arms Supply to ‘Moderate’ Syria Rebels Raises Risk Falling Into Terrorists’ Hands – Moscow
Russia has stepped up and began meeting with the leaders of various Syrian opposition forces in an attempt to bring them all together. This was the US government's job in the past, which Washington tried doing for the past five years, but failed miserable as one could clearly see, Suponina explained.

Moscow has been involved in international efforts to resolve the ongoing civil war in Syria, hosting two rounds of negotiation talks between the government and the opposition in 2015.

On Tuesday, several members of the NCC, including members of various Syrian political opposition parties as well as civic activists, arrived in Moscow to meet with officials from the Russian Foreign Ministry and Russian lawmakers before a second round of international Vienna talks on the Syrian crisis scheduled for Saturday.