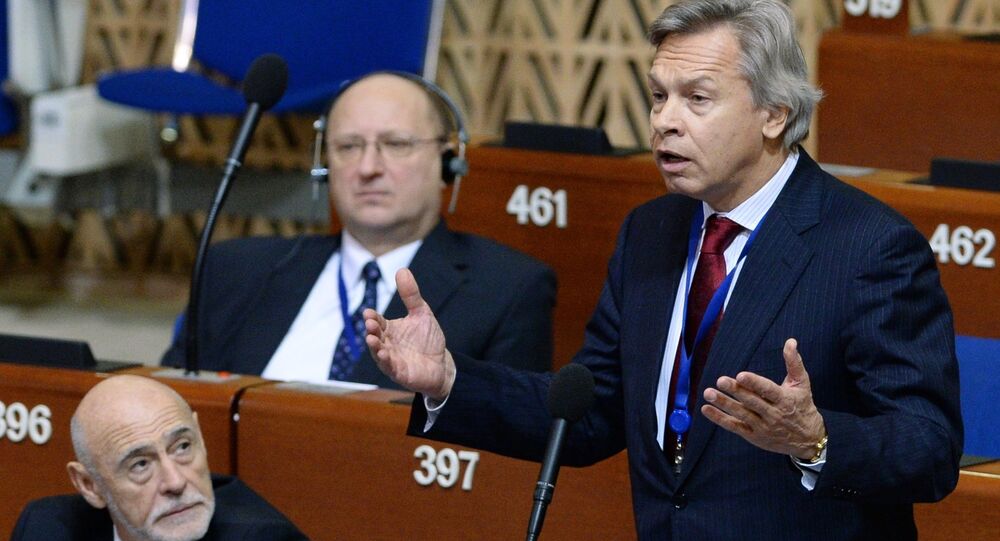 The Russian delegation will not participate in any meetings of the Parliamentary Assembly of the Council of Europe (PACE) as long as the body continues to keep its restrictions in place against Russian lawmakers, the head of the delegation said Thursday.

MOSCOW (Sputnik) — A PACE resolution in April 2014 stripped the Russian delegation of its voting rights, following Crimea’s reunification with Russia. Russian lawmakers were barred from participating in PACE's three key bodies — its bureau, its presidential committee and the standing committee.

© Sputnik / Vladimir Fedorenko
French Lawmaker Says Demoted in PACE Due to Supportive Stance on Russia
"Until the issue of lifting [the PACE] sanctions on Russia is resolved, we cannot talk about returning to our work in full," Pushkov said at an event in the lower house of the Russian parliament, marking 20 years since Russia first attended a PACE meeting.

"We are not talking about an exit," Pushkov stressed, adding that Russia would continue to work with the EU Council and the Court of Human Rights.

The 2014 resolution curbing Russia’s rights in PACE was renewed last April. Alexei Pushkov, the long-time head of Russia’s delegation and chief of the parliamentary Foreign Affairs Committee, warned in June that the delegation would refrain from taking part in PACE sessions if its voting powers are not restored at the January 2016 session.

Russia to Retain PACE Membership on Conditions of Equality – Lawmaker