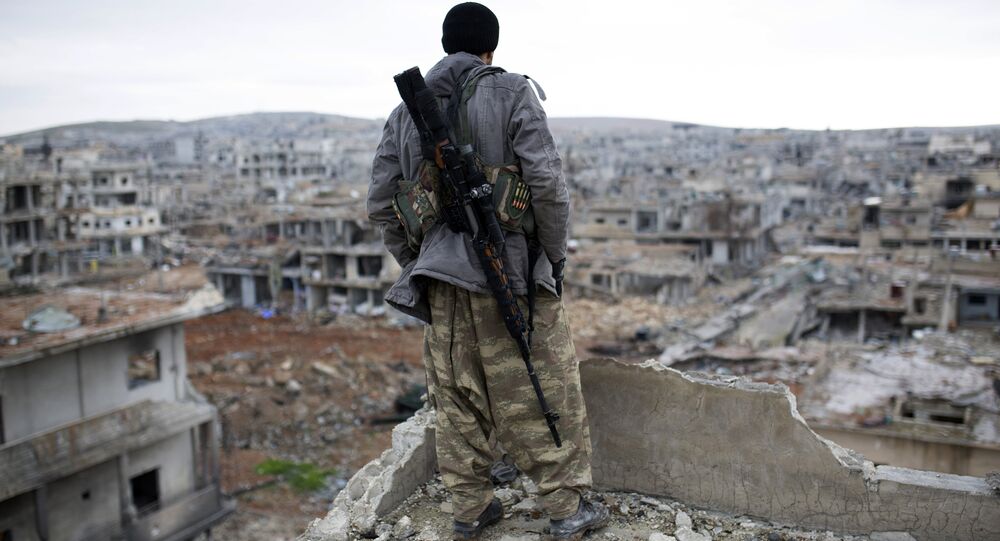 Is Washington Creating Divisions Among Its Allies in Syrian Conflict?

The US risks losing its allies in Syria and across the Middle East, because its policies are exacerbating contradictions between different geopolitical powers in the region, L. Todd Wood wrote.

© AP Photo / Lefteris Pitarakis
Involvement in Syria to 'Damage US Reputation' Once and for All
Washington can’t manage the situation in Syria and is pitting its allies combating the Islamic State terrorist group against one another, US author and journalist L. Todd Wood wrote.

The United States has recently relied on the assistance of the Kurdish Democratic Union Party (PYD) in its campaign against terrorists in Syria. Syrian Kurds demonstrated major success in the reclamation of territories seized by insurgents in the north of the country.

Moreover, they adhered to policies of non-collaboration with Syrian governmental forces, but used to cooperate with the Free Syrian Army, the author continued.

© AFP 2021 / ALICE MARTINS
Some Syrian Opposition Factions Ready to Cease Fire if Needed - Opposition Group
However, Turkey, which is also a NATO member and a Washington’s ally, may get in the way of growing US-Kurdish cooperation.  Officially Ankara is sticking to the position that the PYD is actually a subdivision of the Kurdistan Workers' Party, which is considered a terrorist group in Turkey. Turkish authorities take Kurdish factions on the country’s border as a direct threat to its national security and have promised to carry out air strikes against Washington’s allies in the region, L. Todd Wood wrote for the Washington Times.

“Turkey very much fears a new recognized Kurdish entity on its Syrian border, as they now have with Iraqi Kurdistan on the Iraq border.”

© AFP 2021 / ABD DOUMANY
Pentagon to Resupply Syrian Rebels After Proper Use of Airdropped Munitions
According to him, it also should be taken into account that Russia aims to enter into cooperation with Syrian Kurds as well. And if Moscow succeeds in protecting territories controlled by the Democratic Union Party in exchange for Kurdish support for Syrian President Bashar Assad, the US will lose another one ally in the Middle Eastern region and decrease its ability to influence the events occurring in the area, according to the Washington Times.

“This situation screams for leadership from the White House.  Our remaining allies in the Middle East and elsewhere are watching,” the author pointed out.

In late October, Turkish President Recep Tayyip Erdoğan claimed Turkey will “do all that is necessary” to prevent Kurds supported by the US from establishing autonomy in the Syrian city of Tell Abiad. He outlined that purported measures to achieve this goal may include military operations.