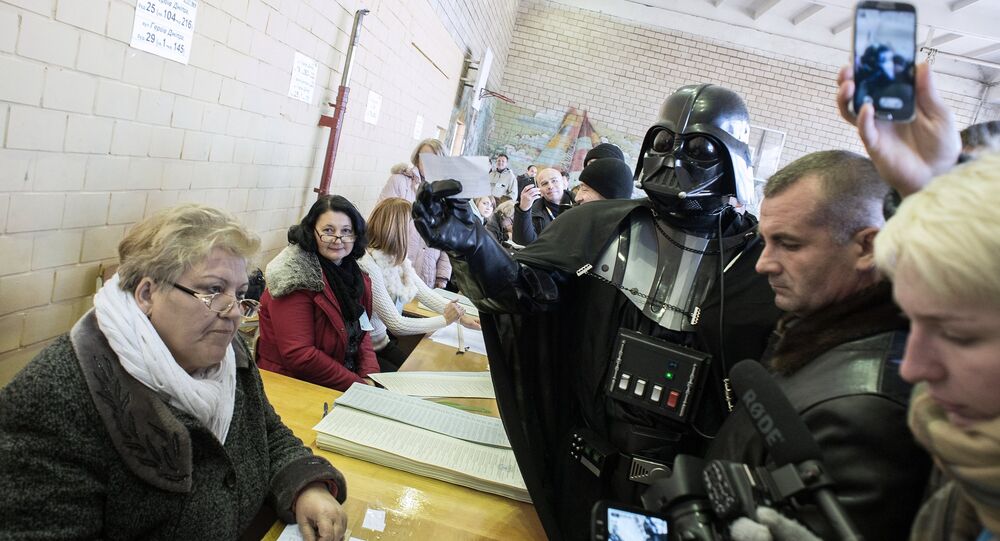 In Ukraine, 'Politics is as Real' as 'Star Wars' Universe

Ordinary Ukrainians have become so disillusioned with Maidan coup and those it brought to power (primarily Poroshenko and Yatsenyuk) that they elected Emperor Palpatine to the Odessa city council in local elections held on Sunday, Berlin-based writer Leonid Bershidsky asserted.

You heard it right. Emperor Palpatine's new seat is in the southeastern Ukrainian city, which seems to be particularly fond of famous characters from the "Star Wars" universe dabbling in politics. Take Darth Vader, one of the leaders of the Ukrainian Internet Party, who went to the polls with Chewbacca, a furry co-pilot of Harrison Ford's Han Solo.

But let's return to Dmitri Palpatine, who officially adopted the name of the main antagonist in the "Star Wars" universe and now works as an Emperor at Palpatine Finance Group. "And why not? To many voters, the country's politics seem as real as those of a fictional galaxy far, far away," Bershidsky noted.

For the writer, Palpatin's victory is "the best symbol of that mistrust and the renewed separation between the state and the people."

The mistrust resulted from a multitude of promises left unfulfilled. Poroshenko came to power pledging to grant greater autonomy to Ukraine's regions and create nothing short of a prosperous Western-style democracy. Today the country is plagued by the ongoing civil war, depressed economy and widespread corruption.

© Sputnik / Andrey Stenin
Ukrainian Elections: Maidan Dreams Betrayed, Candidates Buy Votes for Food
Not surprisingly then, a year later, Ukrainians "have little confidence in the reformist rhetoric emanating from the government," Bershidsky observed, and are therefore unwilling to support it.

The outcome of the local elections is telling. The polls, according to the writer, "handed power in the south and east to former supporters of the ousted president, Viktor Yanukovych. The vote also created sizable ultranationalist factions in a number of local legislatures, including in the capital."

This trend has major implications for Ukraine's immediate future and development.

"To retain a semblance of control over the newly empowered regions, Poroshenko and his team will have to make deals with oligarchs, local barons, nationalist militants and populists. This will compound the country's barely manageable chaos. It also will make more difficult an economic rebound or strict adherence to the economic program dictated by the IMF as a condition of the country's financial rescue package. Rooting out corruption now appears a remote prospect at best," Bershidsky noted in an article for Bloomberg View.

Judgment Day Looms Over Poroshenko as Ukraine Goes to the Polls