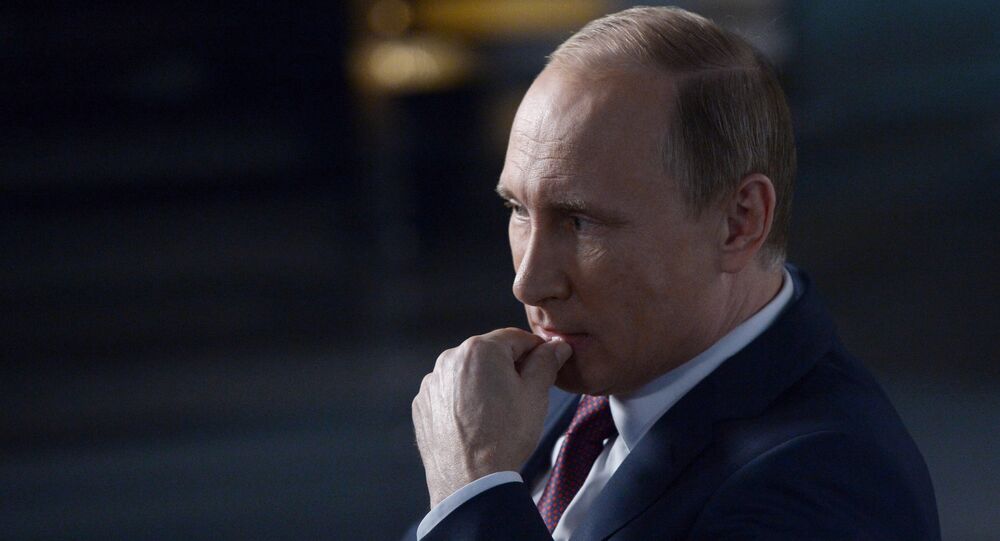 The Russian President knows perfectly how ‘to play the diplomatic card’ and ‘never make mistakes,’ according to an expert of Press TV. Vladimir Putin intelligently exposed the lie of the West regarding Iran's nuclear program and the false conflict against ISIL.

Jim Dean, editor of Veterans Today, said that now everyone will unite around the Russian leader, as his popularity ratings in the country hve reached a new record. Perhaps now, Putin will be the most popular world leader of the past 50 years.

© Sputnik / Anton Denisov
ISIL Seems to Have Got Arms From Across the Middle East, Question is How? - Putin
“We have just gone through the Iranian nuclear talks after more than ten years of lies about a secret nuclear program of Iran, which has been exposed but the media is not talking so much about it. This is one of the great results of the negotiations. After all, neither the US nor Israel was able to provide evidence which, according to them, proved that Iran has a nuclear program,” Dean told Press TV.

The expert further said that, “Every taxi driver on the planet, even in some rundown town of some Third World country is now aware of the Western game of these fake terrorist movements that are needed to create a threat. Then allegedly for security reasons the US organizes coups in order to bring to power a friendly government.”

But now those plans have been exposed because when Putin talked about his goals in Syria, he offered to cooperate with the West, he said that anyone who wants to join in the efforts is welcome to fight ISIL together. The expert noted that everyone denied cooperating with Putin except for the agreements to coordinate air operations.

“As the campaign became more successful, as you see, NATO, Turkey — all countries that sponsor terrorism are not happy about it. He drew everyone's attention to them and now everyone knows who uses terrorism to change the regime and who the real threat is.”

Putin Only Leader to Participate in Valdai Discussion Club-Style Talks