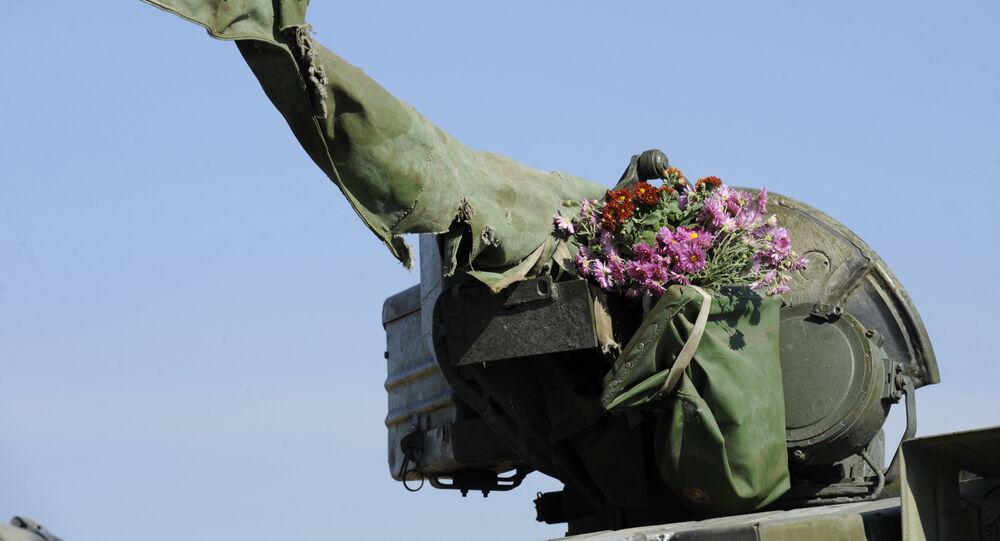 Moscow Achieves the Unthinkable, Catching Kiev in a 'Peace Trap'

In an article for Latvian news website Vesti.lv published earlier this week, Babitsky suggested that for any potential warmongers in Kiev, the Minsk agreements have effectively become a "noose around their necks," only tightening as time goes on to ensure that the conflict in eastern Ukraine cannot continue.

The journalist noted that the recent "abundance of conflicting versions attempting to give a consistent description on Russian policy in Ukraine can be explained, in part, by the fact that the strategic position formulated and pursued by Moscow does not imply quick results, being a very long-term project, designed with implications in mind which are far broader than the settlement around the two unrecognized Donetsk and Lugansk People's Republics."

© Sputnik / Sergey Averin
DPR Begins Withdrawal of Weaponry With Less Than 100mm Caliber
Moreover, the Russian strategy recognizes, according to Babitsky, that "some of its interim and even core objectives may not be achieved. This explains why Russia's actions surrounding Donbass may seem ad-hoc, hectic, and even devoid of logic."

However, according to the journalist, the reality is that the Minsk II agreement, along with "the whole complex of measures aimed at ensuring its implementation, as well as the pressures on Kiev" from Donetsk, Lugansk and Russia in coordination with the countries of the EU are all part of Moscow's global strategy aimed at containing and limiting Ukraine's ability to wage war against its breakaway republics.

"It is necessary to understand that Russia is not just trying to strengthen the defense of the breakaway republics…it is also working to influence its western neighbor in such a way as to protect both itself and to push the situation in Kiev's domestic politics away from the sort which threw Ukraine into civil war in the first place," the journalist noted.

According to Babitsky, the Minsk peace plan has effectively turned into a 'peace trap' for any potential warmongers in Kiev, "even if Ukrainian politicians may be trying to interpret its provisions in their own favor."

Thus, even as Kiev attempts to use the articles of Minsk II to try to gain some military or political advantage, as with the discussions on taking control of the border or ensuring that elections in the Donbass are held under Ukrainian law, the reality, Babitsky notes, is that the plan "spells out very precisely the sequence of actions which Kiev and the breakaway republics must take, and neither side is allowed to change it –or to pick and choose only what it likes."

© REUTERS / Stringer
Kiev Withdraws Weapons in Donetsk Region, to Complete Pullback in November
This, according to the journalist, means that "Russia has managed to achieve the unthinkable, tying Poroshenko's hands, factually with the help of the European countries, and forcing him to stop Kiev's military campaign and to begin a withdrawal of weapons."

Babitsky recalled that "over the course of many months, the Ukrainian president not only attempted to avoid the fulfilment of this crucial point among the Minsk accords; on the contrary, he tried to whip the situation into a full-scale war, which was expected to begin in the fall."

"But it was in the fall, following the meeting of the Normandy Quartet in Paris that it all came to an end," the journalist continued. "The European leaders have finally been convinced that the Ukrainian army, not the Donbass militia, were the ones responsible for the constant shelling of settlements in the Donbass. What it was exactly that Merkel and Hollande said to Poroshenko remains unknown, but it is obvious that whatever it was, Poroshekno found it compelling. The shelling stopped just a day or two later, and now it has come down to Kiev removing heavy equipment from the line of contact."

According to the journalist, "stopping the war is a very important aim, but it is a tactical one. Stratagems have already been laid for the following stages of Minsk II's implementation – for example, the law on elections in the Donbass, and the recognition of the region's special status, in coordination with representatives of the breakaway republics. And here what is important is not so much the concord, but the legitimation of the authorities of the DPR and LPR as the representatives of their territories. By agreeing to negotiate with them, Kiev recognizes the republics as sides in the conflict, with whom it is necessary to create a formula for peace. This is a giant step in the path toward Ukraine's federalization."

Advising against any premature celebrations, the journalist emphasized that "the whole process will be far from ideal. Poroshenko will be desperate to find a way out of the 'peace trap' he has found himself in. However, this will only multiply his grief, since the reputation of a person violating agreements which have already been made is not the best political baggage to have in relation to the leaders of Europe."

© AP Photo / Efrem Lukatsky
Minsk Deal Finally Working, No Shelling in Donbass for a Week
As a result, the journalist suggests that "Moscow and the rebels are, in any case, the winners, whether Poroshenko derails the peace talks, or hesitantly executes the agreement."

Commenting on the political implications of the Minsk II agreement for Ukraine's ruling elite, including the president, Babitsky notes that the present agreement has effectively painted Poroshenko into a corner.

"Any steps to meet the representatives of the DPR and the LPR halfway on Poroshenko's part will be treated by radicals as something akin to abetting terrorism. This, incidentally, is a real article in the country's criminal code. Following the collapse of the governing coalition, he will not be able to obtain the necessary number of votes to grant special status to the breakaway territories. Accordingly, the president does not have any space for maneuver. He can't move forward, and is not allowed to move back."

With Minsk II working "as a noose slowly being tightened around the neck of the current regime in Kiev," the journalist believes that ultimately, "federalization will inevitably overcome Ukraine; the only alternative is complete chaos and the country's disintegration. But there is now a small chance that via its strategy, Moscow will be able to help its neighbor to avoid this sad fate."

An independent journalist with 25 years at Radio Liberty/Radio Free Europe under his belt, Babitsky was fired from his post as a military correspondent earlier this year after filming a report in the Donbass where he discovered the bodies of four civilians killed by the Ukrainian army. Before his work in eastern Ukraine, Babitsky worked as a correspondent in the Northern Caucasus, strongly criticizing Russian authorities during the war in Chechnya. As a result, his views can be said to be anything but partisan.

DPR Begins Withdrawal of Weaponry With Less Than 100mm Caliber