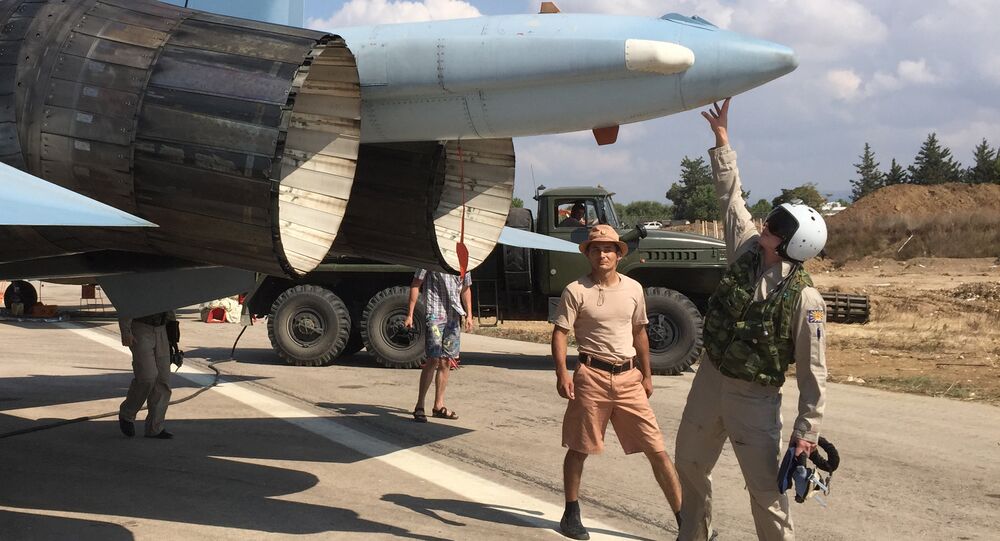 While the Russian Air Force continues to smash terrorists in Syria, liberating Syrian cities and villages from al-Qaeda and ISIL together with the Syrian Army, Washington in its turn proceeds with arming extremists in the region, US political analyst Caleb Maupin notes.

"Over 250,000 Syrians are already dead. Over 2 million are refugees. Why are the leaders of the United States so determined to keep this ugly war going?" US political analyst Caleb Maupin asks.

© AP Photo / Dmitry Steshin, Komsomolskaya Pravda, Photo via AP
Russia's Syrian Operation to Smash Terrorists, 'End Tyranny' of Banking Elite
"US media gives the impression that the conflict began due to the actions of the Syrian government. This is false. Since 2011, the United States and its gulf state allies have been pouring billions of dollars into a violent insurgency against the Syrian government," he wrote in his article for New Eastern Outlook.

The political analyst underscored that even the Western media have repeatedly admitted that "Takfiri religious extremists are clearly a dominant force among the anti-government fighters."

It's no secret anymore that Islamic State emerged among the Takfiri extremists who have been armed and trained by the US and funded by Washington's generous Gulf allies. Today US weapons are known to regularly fall into the hands of al-Nusra Front, also known as al-Qaeda in Syria.

Incredible as it may seem, US military officials do not scruple to proceed with sending arms to al-Qaeda: in a testimony before the US Congress General David Petreaus said he supports providing the group with US weapons.

Most of the extremists who have sought to topple Bashar al-Assad since 2011 are not even Syrians.

"At the start of the war against Syria [2011], Qatar printed and distributed false Syrian passports to jihadists from al-Qaeda so that they could convince Atlantist journalists that they were "rebels," and not foreign mercenaries," French journalist Thierry Meyssan noted in his September article for Voltairenet.org.

© AP Photo / Hadi Al-Abdallah
US War in Syria, Iraq Part of Bigger Plan Aimed Against Iran and Beyond
The terrorists do not have the support of the Syrian population, Maupin pointed out referring to the fact that 80 percent of Syrians currently live in areas controlled by the government.

In his turn, US author and investigative historian Eric Zuesse has repeatedly called attention to the fact that the recent Western polls indicated that over 50 percent of the population of Syria support democratically elected President Bashar al-Assad.

"Observing the popular support for the Syrian election was a moving experience. The people voted from their hearts. Here in the West… little more than 50 percent of the population votes. The overwhelming response of the people inside and outside of Syria sent a powerful message to the world of loyalty to their country and to the government that is currently safeguarding it," Judy Bello noted, while speaking at the United Nations, as cited by Maupin.

The Russian military plan in Syria has brought new hope, the US analyst stressed: Russia has the potential to end this war and make Syria a peaceful country.

"With an end to this war finally in sight, why are the leaders of the United States now air-dropping more and more weapons to Anti-government, extremist forces?" Maupin asks.