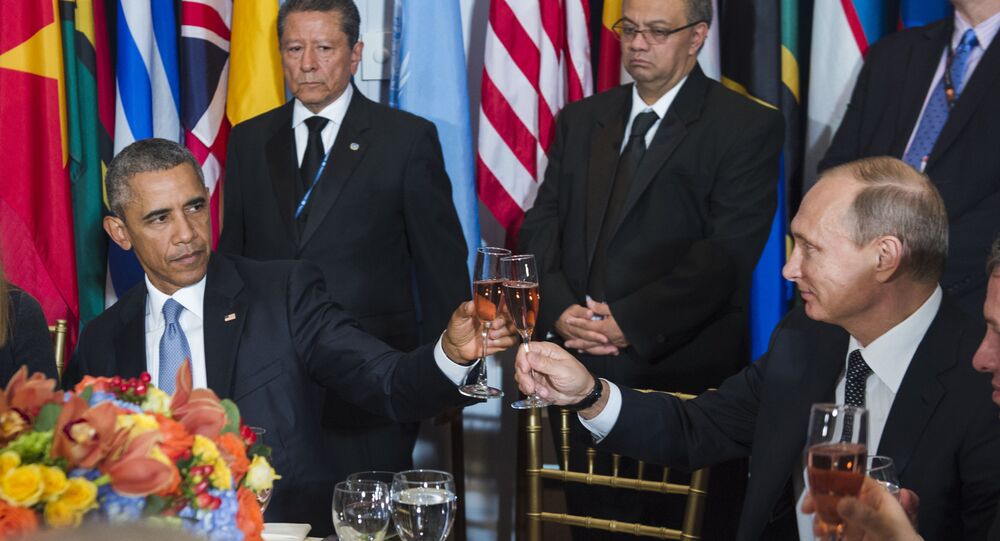 'Practical Alliance of Washington and Moscow Might Save the World'

Putin recently flayed some American politicians for having "mush for brains" but he had grounds to say so, judging from the surge of radical Islam in the Middle East and elsewhere sparked among other things by the US military campaigns in Afghanistan and Iraq, James Lewis wrote for American Thinker.

© Sputnik / Dmitriy Vinogradov
Israeli Media: US Coordinates Syria Bombing With Russia Through Israeli Hot Line
The regional power balance has shifted dramatically. Libya, Syria, Iraq and Yemen are torn along sectarian lines and could well be overrun by Islamic State. The self-styled caliphate is already a breeding ground for terrorists. If it is not defeated, it will only produce more seasoned fighters dead set on wreaking havoc anywhere they can.

The situation could become even worse if terrorists get access to nuclear weapons. This prospect is not a farfetched one, Lewis noted in his analysis of a recent article by Henry Kissinger. Putin's remark, therefore, "isn't just braggadocio," he observed.

The Russian leader, according to the expert, has "strategic clarity" and his campaign in Syria has a clear goal, counterterrorism.

"Putin has been watching jihadist forces on his southern border come closer and closer to nuclear weapons. … Imagine thousands of suicidal fanatics on our southern border, and you get the picture as seen from Moscow," he stated.

Lewis believes that there is only one way to avoid the catastrophic scenario of a hot nuclear arms race in the Middle East. Washington and Moscow have to cooperate.

"A practical alliance of the West with Russia might save the world," he concluded.

Despite Moscow's Efforts, US Standoff With Russia Will Continue