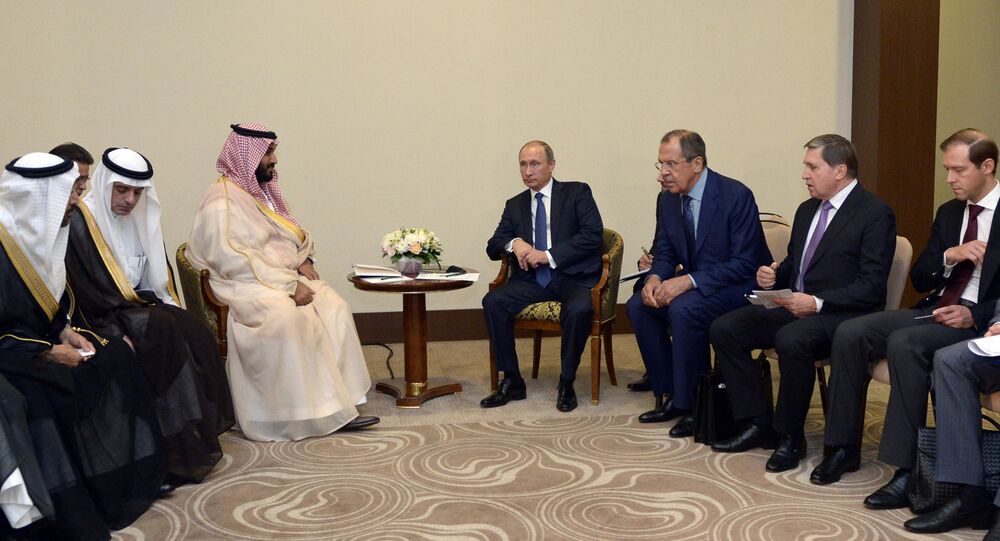 SOCHI (Sputnik) — The Saudi foreign minister said after a meeting with his Russian counterpart Sergei Lavrov that Riyadh interpreted Russia's operation in Syria as an alliance between Iran and Russia.

"Regarding the military operation carried out by Russia on the territory of Syria, we expressed our concerns that this operation could be interpreted as an alliance between Iran and Russia. But during the conversation, our Russian friends explained that the main objective was to fight Islamic State."

Meanwhile, Sergei Lavrov said that Russia was ready for military cooperation with Saudi Arabia in Syria to erase any doubts regarding its aims in Syria.

"From our side we expressed readiness, which found a counter-response from Saudi Crown Prince [Mohammad bin Naif], for the closest cooperation between our military and special services, so there would be no doubt that the targets of Russian aviation are the Islamic State, the Nusra Front and other terrorist groups."

The Saudi top diplomat also called on the implementation of the UN-backed Geneva communique on Syria and reiterated his country's stance on the Syrian issue remained unchanged.

"We once again reiterated Saudi Arabia's position that we are calling for [President Bashar] Assad's resignation, as well as our support of the moderate opposition," al-Jubeir added.

© AP Photo / Khalid Mohammed
Russia, Iran Don’t Trust US, Assume Leadership in Iraq
However, Lavrov said that Russia and Saudi Arabia shared the stance on the Syrian conflict and agreed on the necessity of a political process aimed at the country's national unity.

The leaders of Russia and Saudi Arabia discussed the Syrian conflict settlement, particularly proposals on the implementation of the Geneva communique of June 2012, at a meeting on Sunday, Sergei Lavrov said.

Lavrov said that Moscow and Riyadh confirmed there was a number of opportunities for bilateral cooperation in different areas, including the military-technical sphere.

"The parties stated the existence of very good opportunities in various fields, including economy, investment, military-technical cooperation. Corresponding plans will be implemented."