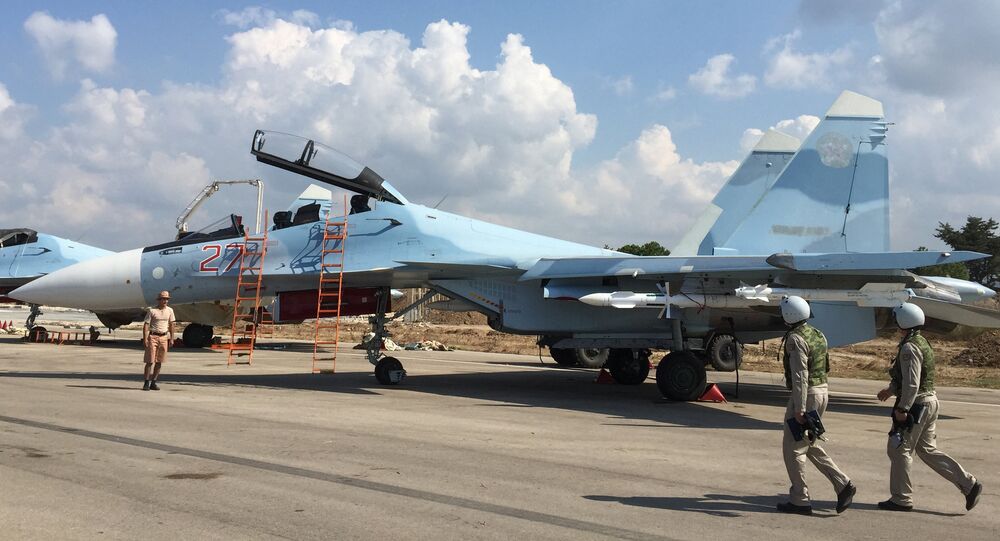 Russia Outmaneuvers US in Syria, Dealing Blow to Washington's Credibility

Moscow's decision to provide military assistance to Damascus is a win-win for Russia: if it succeeds, Russia ensures its leadership; if it fails, the blame will rest on Washington and the West for not joining Russia's anti-ISIL coalition, Armenian-Russian expert Andranik Migranyan deems.

© Sputnik / Dmitriy Vinogradov
Russia's Strikes in Syria: Hitting All Targets With Pinpoint Accuracy
According to Director of the Institute for Democracy and Cooperation and foreign policy expert Andranik Migranyan, by stepping in, Russia aims to accomplish a number of tasks: to strengthen the Syrian statehood, to support ground forces of Syria, Iran and Iraq in their counteroffensive against terrorists; and, last but not the least, to address the problem of Islamic extremism in the post-Soviet space and in Russia.

"The refugee crisis in Europe and the hearings in the US on aid to the Syrian opposition showed the failure of the Western response and the lack of serious, moderate alternatives to Assad," Migranyan said addressing the Center for the National Interest, according to the NI media outlet.

The foreign policy expert stressed that Russia's involvement in Syria does not contradict the US' interests. Indeed, since 2014 Washington has been busy with fighting against Islamic State and Russia is pursuing the very same goal in Syria.

Ministry of Defense of the Russian Federation
Game-Changer: Russia's Involvement in Syria Shifts Balance of Power
But those who are really unnerved by Russia's strikes are the US' Sunni allies — Saudi Arabia, the UAE, Qatar and etc. — which have "practically financed" and "stimulated" radical jihadists in the region.

Remarkably, Migranyan is not the first expert who has nailed the Gulf kingdoms for supporting extremism in the Middle East. For instance, on March 4, 2014, Treasury Undersecretary David Cohen accused Qatar and Kuwait of aggravating tensions in the region while making remarks at the Center for a New American Security.

"Press reports indicate that the Qatari government is… supporting extremist groups operating in Syria.  To say the least, this threatens to aggravate an already volatile situation in a particularly dangerous and unwelcome manner," Cohen said, adding that private funding of terrorists in Kuwait and Qatar is also flourishing.

"The recipients of these funds are often terrorist groups, including al-Qaeda's Syrian affiliate, al-Nusra Front, and the Islamic State of Iraq and the Levant (ISIL), the group formerly known as al-Qaeda in Iraq (AQI)," the US official stressed.

© REUTERS / Alaa Al-Faqir
What's Behind Carter's Claim That Russia Will Suffer Casualties in Syria?
On the other hand, Migranyan underscored that Russia's military involvement in Syria has indicated clearly that the Western policy of isolation of Moscow as well as its 'Assad must go' strategy have completely failed.

Bashar al-Assad's resignation cannot be regarded as a precondition for Russo-American cooperation in Syria, the expert emphasized.

However, according to Migranyan, "the present [Russian] intervention… is not intended as support for Assad, but as an effort to preserve endangered Syrian statehood."

The foreign-policy expert also criticized those US presidential hopefuls who called for implementing a no-fly zone over Syria, stressing that their real goal is to "earn some points" in the 2016 presidential race.

Interestingly enough, prominent American conservative commentator Patrick Buchanan lambasted US neocons for their Syrian no-fly zone idea and criticized US Senator John McCain for his proposal to arm the so-called "moderate rebels" with portable US surface-to-air missile systems to bring down Russian planes.

"Establishing a no-fly zone over Syria, which means shooting down Syrian fighter-bombers and helicopters, is an act of war," Patrick Buchanan warned in his piece for the American Conservative.

What makes matters even worse, there is no guarantee that America's Stingers provided by the Pentagon to the so-called "moderate rebels" would not be then used by al-Qaeda affiliate al-Nusra and Islamic State to shoot down US fighter jets.

Western mass media has repeatedly reported about inglorious defectors from the "moderate" Free Syrian Army which either handed their weapons to extremists or joined them.

WashingtonPost: 60 to 80 percent of the arms that the US shoveled into #Syria went to alQaeda https://t.co/AJToj6qkHp pic.twitter.com/PMjWfLCIJc

According to Migranyan, Washington has not yet made a strategic decision regarding Russia's role in the Syrian conflict. However, some of his American counterparts admitted "that [Russian President] Putin indeed appeared to outmaneuver Obama, doing damage to US credibility in the process," the NI concluded.