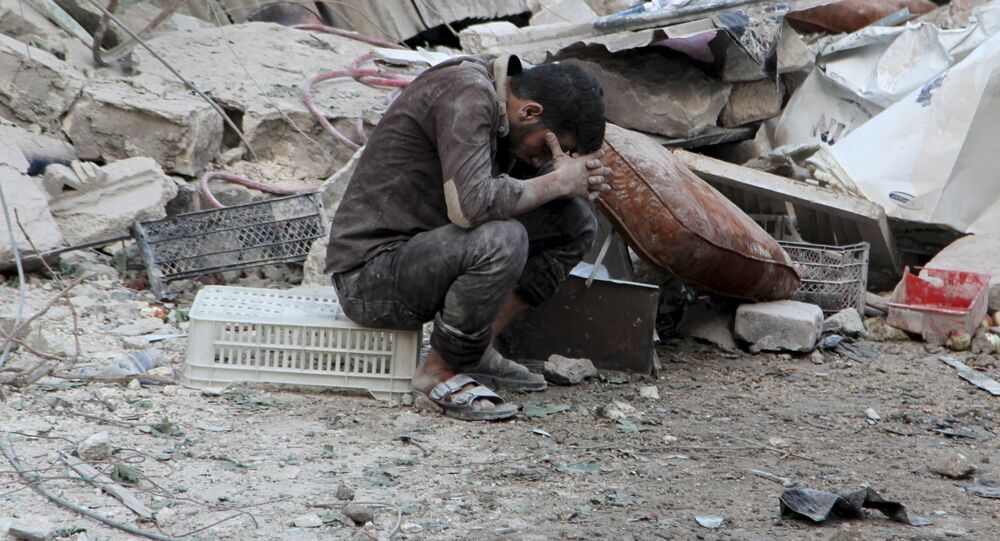 Frustrated with the US-led coalition's ineffective anti-ISIL campaign, Iraq is turning to Russia, viewing Moscow as a much more trustworthy partner than Washington, US author Eric Zuesse notes.

© REUTERS / Alaa Al-Faqir
What's Behind Carter's Claim That Russia Will Suffer Casualties in Syria?
Yes, Iraq wants Russia to play a bigger role than the US in the war against Islamic State, and for good reason, US author and investigative historian notes.

Indeed, Iraq's security and economic development are not on the foreign policy agenda of Washington. Substantially weakened due to the American invasion of 2003, the country is currently suffering from the ISIL advance.

"It is also an unequivocal statement from the majority-Shiite nation of Iraq, that the US is too heavily committed to the rabidly fundamentalist Sunni royal family of Saudi Arabia (who provide the overwhelming bulk of the funding for al-Qaeda and other jihadist movements), to be willing to do what must be done in order to defeat in Iraq the Sunni extremists who have destroyed Iraq, and who are now possibly turning Iraq into a failed state, like Libya has become after NATO’s bombing campaign there in 2011," Eric Zuesse pointed out in his article for Strategic Culture Foundation.

To complicate matters further, in February 2015, Head of the Iraqi Parliament's National Security and Defense Committee Hakem al-Zameli reported that there was evidence showing that the US Apache helicopters had repeatedly dropped food and weaponry for Islamic State.

"We keep finding documents, pictures, and information confirming that the [US-led] coalition aircraft violate Iraqi sovereignty and international norms in order to prolong the war with ISIL by providing it with aid by air or on land," al-Zameli said as quoted by Zuesse.

And it is not the first time that Washington and Riyadh have covertly supported Sunni extremists in order to shift the balance of power in the region, the investigative historian remarked.

"The Saudi royals had co-founded al-Qaeda (working through the CIA and Osama bin Laden) in order to defeat the pro-Russian Afghan government of Nur Muhammad Taraki back in 1979," Zuesse reminded.

© AFP 2020 / BARAA AL-HALABI
'Hands off Al-Qaeda!' US Hawks Find Themselves Protecting Terrorists
Remarkably, Saddam Hussein in Iraq and Muammar Gaddafi in Libya had blocked jihadists and Islamic extremists from operating in their countries. By toppling Hussein and then Gaddafi the US has played straight into Islamists' hands. So far, it was Washington who facilitated the rise of Islamic State, not Iraqis, the US author underscored.

Meanwhile, the Saudi monarchy, backed by the US, is imposing its own ultra-conservative form of Sunni Islam – Salafism – in the Middle East and beyond. This Western support to Sunni jihadists is predictably frustrating Iraqi Shiites.

"The United States is allied with the Saudi royal family's political movement, against Russia, and against Iran — and, therefore, against Baathist Syria, which allies with both Shiite Iran and secular Russia… And Iraq that has moved more firmly into the Iranian camp is moving toward Russia and away from the United States," Zuesse explained.

Today, Washington is snubbing both Russia and Iraq, blaming the first for what the Pentagon calls a "flawed" military strategy in Syria, and the latter for its "unwillingness" to fight Islamic State. However, it cannot divert public opinion from the US' evident failure to eradicate ISIL as well as Washington's efforts to re-draw the map of the region.

Run and Desert: US Strategy to Train Syrian Rebels Was Doomed From Start