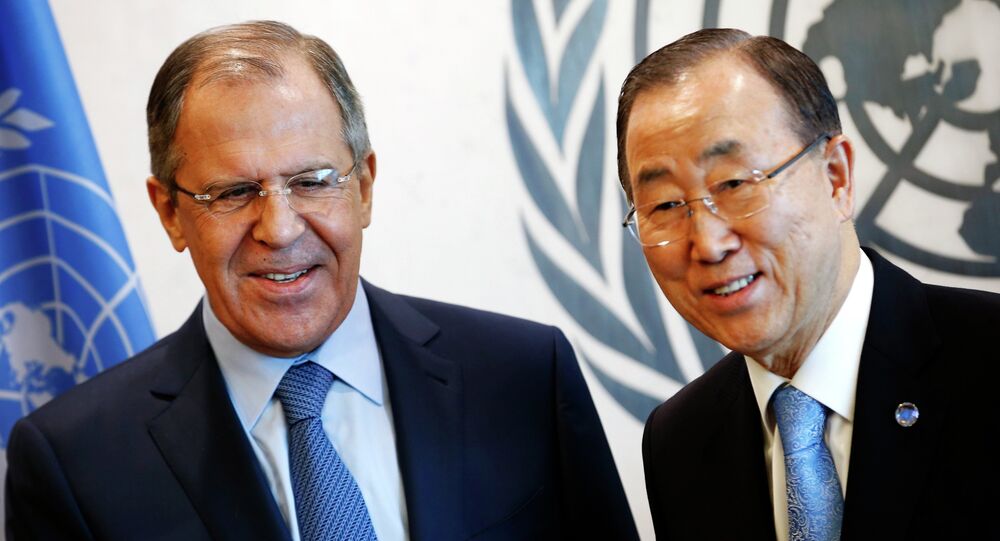 "The Secretary-General and the [Russian] Foreign Minister discussed the latest developments in Syria [on Thursday], including the campaign against ISIL and other terrorist groups, agreeing that any air strikes should be carried out with strict observance of international humanitarian and international human rights law," the United Nations said in a Thursday release.

Lavrov stressed on Wednesday that while Russian military action in Syria is being conducted at the request of Syrian President Bashar Assad and is thus in line with the UN charter, US-led coalition strikes are being carried out without the approval of Damascus or the UN Security Council.

"The Secretary-General reiterated his previous statements that all feasible precautions must be taken to avoid civilian casualties. It was noted by the UN side that terrorist groups targeted by the military campaign should be exclusively those specified in the relevant UN Security Council Resolution and that the use of indiscriminate munitions, in particular barrel bombs, should immediately cease," the Thursday UN statement said.

Russia’s precision airstrikes on ISIL positions in Syria are carried out with the coordination of the Baghdad Information Center comprising Russia, Iran, Iraq and Syria. According to the Russian Defense Ministry, the strikes are launched only after thorough air surveillance and careful verification of data provided by the Syrian military.

On Thursday, Russian and US military officials held their first deconfliction talks about their respective activities in the Syrian airspace. The talks are aimed at avoiding unintended encounters between the two nations’ militaries.