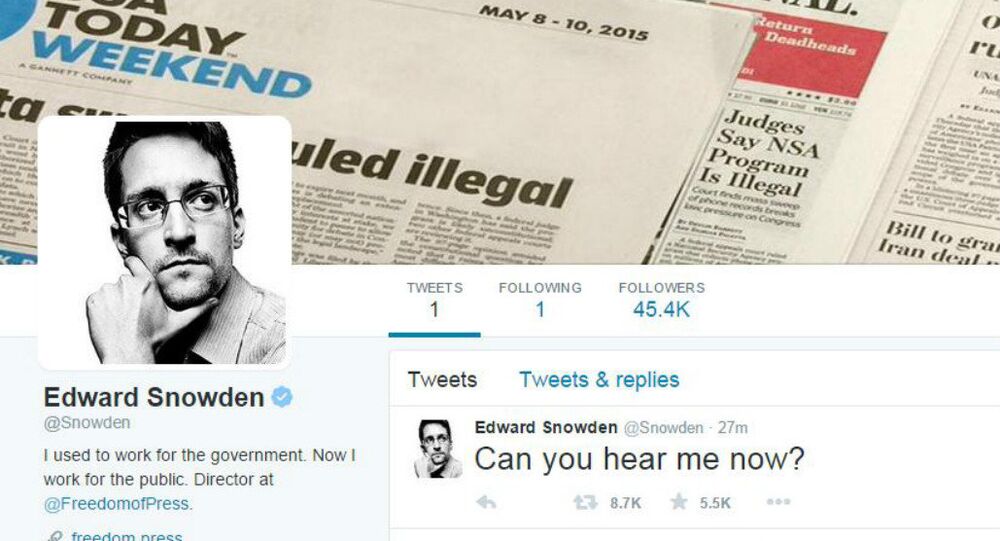 Whistleblower and former NSA and CIA contractor Edward Snowden has joined Twitter. Can you guess the sole account he’s following? His former employer, the NSA.

Less than 30 minutes after the account went live, Snowden had over 50 thousand followers — and all of them, and the hundreds of thousands yet to come, have one person to thank: renowned astrophysist Neil deGrasse Tyson.

He interviewed Edward Snowden recently, and told him he needed a Twitter handle. The cybersecurity and privacy advocate seemed to agree, and even managed to convince Twitter to hand over an existing (albeit inactive) handle — @Snowden. His very first tongue-in-cheek post may be directed at the only account he has followed so far: the National Security Agency.

Can you hear me now?

The internet was quick to respond, with people like Glenn Greenwald and Dan Froomkin welcoming Snowden to the site.

Snowden's ability to participate in the debate he started — rather than sitting incommunicado in a US cage for decades — has been crucial.

The man himself, meanwhile, has already Tweeted at deGrasse Tyson, jokingly enquiring about passport control on Mars. Not for himself, obviously. Someone asked him to check.

.@neiltyson Thanks for the welcome. And now we've got water on Mars! Do you think they check passports at the border? Asking for a friend.

According to Snowden's lawyer, Edward himself will manage the account. And for the first time since his move to Russia two years ago, Snowden is trending on Twitter because of something he did, not something he said. But for now, the biggest question is still whether the NSA will follow Snowden back…on Twitter.