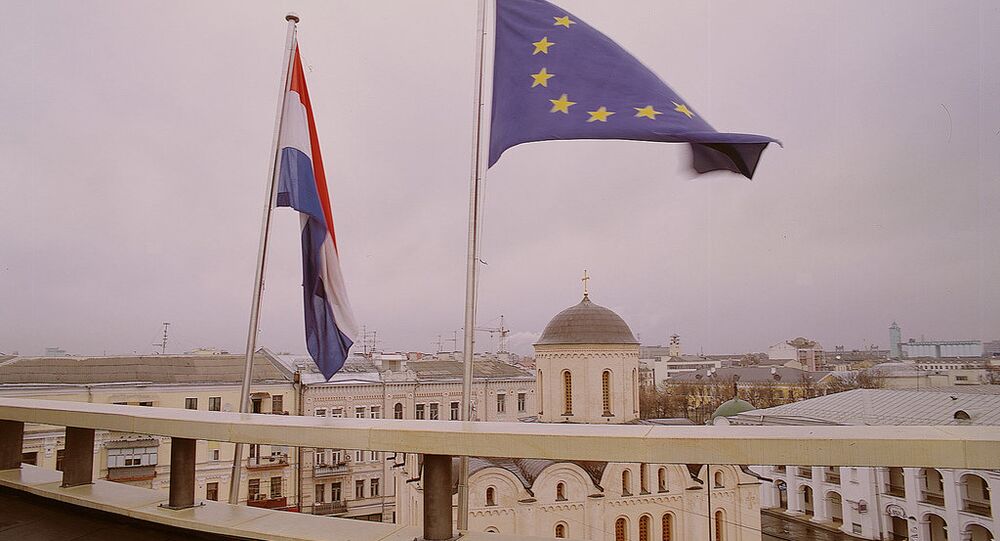 Dutch People vs Brussels: Ukraine Referendum Will Show Who Wears the Pants

After the collection of 430,000 signatures by activists and a popular Dutch blog, the Netherlands must now hold a referendum on the EU-Ukraine Association Agreement, ratified by the Dutch government this summer. The referendum is shaping up to be a historical one, determining whether the power lies in Brussels or in the hands of the Dutch people.

© Flickr / Ivan Bandura
Dutch Anti-Association Push: Holland Does Not Want Ukraine in EU
Earlier this month, an initiative by Geenstijl (No Style), an activist blog, asked Dutch citizens to sign an appeal to hold a referendum on the European Union's association agreement with Ukraine, criticizing it as a provocative threat to the well-being of both the Dutch and Ukrainian people.

Gaining the support of several civil society groups, including the EU Citizen Committee and the Forum for Democracy, the initiative led to the collection of over 430,000 signatures, well over the 300,000 necessary for the referendum to take place.

The initiative was made possible through a new democratic tool which allows Dutch citizens to call for a national referendum on recently adopted laws or treaties. With the signatures handed over to the Dutch Electoral Council, a referendum must now be held within six months, and is likely to take place in the spring of 2016.

Speaking to Radio Sputnik, political scientist and social activist Pepijn van Houwelingen, a member of the EU Citizen Committee, emphasized that the initiative has taken the Netherlands by storm, with over a thousand volunteers organizing to collect signatures, working across the country.

© Flickr / Richard White
Czech Parliament Ratifies Ukraine-EU Association Deal
"It's very real…It has all become serious," the activist noted, when asked whether this initiative was the real deal or not, given that it was all started on a website known for its wit and humor. Houwelingen also emphasized that this has all been an "organic, bottom up" movement, without any single leader coordinating the collection of signatures.

The activist noted that the EU-Ukraine Association Agreement, which the Dutch government ratified this summer, is just the tip of the iceberg regarding serious issues within the structure of the EU itself, and the supranational union's tendency to limit the freedoms of member states and their people.

"We want to mobilize people; to build up the tension; to force this issue somehow," Houwelingen said, emphasizing that the referendum will really be a test on how much autonomy and independence the Netherlands has in relation to Brussels.

"This is what we want to find out," the activist noted. "The EU is like a big machine, and it's unthinkable for many of these politicians that only the Netherlands would vote against it. But the point is: suppose that the Netherlands cannot vote against it. Then we are not a sovereign, free country anymore because we have to do what Brussels wants…That will be the main issue. Will the Dutch government be able to not sign this treaty?…Is it Brussels or the Dutch population who are the most powerful force within the Netherlands? That is the issue."

Houwelingen noted that the Dutch people weren't even asked their opinion on the controversial association agreement, with no debate taking place in society, in the media, or even in government.

"All these laws are enacted without any debate in the Netherlands…We found out during the campaign that our own Dutch parliament doesn't even read the treaties. They just vote and agree," the activist noted. "There is no debate, no news in the media, so the Dutch people don't even know [what's happening]. If you ask nine out of ten people in the street, they won't know. So this is one of the things that we want to accomplish –that there will finally be a debate…and we will have it in the coming six months."

Houwelingen suggested that the signature collection campaign's success and the resultant referendum will be "very important" as far as the Netherlands within the EU is concerned. "If you remember, the Dutch voted once before in a referendum almost 10 years ago, voting against the EU Constitution, and it got passed anyway, against the wishes of the majority of the Dutch population." As a result, since then, in his words, people's views on referendums have become "tainted."

On the whole, "the Dutch are very apprehensive about how things are going," Houwelingen noted. "There are big problems within the EU as you know; immigrants, the Euro, and still they continue with the integration process."

Association Will Turn Ukraine Into Colony of Brussels

As far as the EU-Ukraine Association Treaty is concerned, Houwelingen said that "this again is a step in the wrong direction," emphasizing that the treaty is "bad not only for the Netherlands, but for Ukraine as well."

Contrary to the Dutch media's suggestion that the association agreement is just a free trade pact, Houwelingen notes that it is "much more than that. It's also about political and military cooperation. Ukraine will be expected to enact European law; it will become easier for Ukrainians to travel to Europe…there will be financial support from the European Union to Ukraine. It's not just a free trade agreement, it's much more."

The activist questioned whether even Ukrainians themselves genuinely wanted the treaty, or knew about it in any detail. "It's not beneficial for the EU, it's not beneficial for the Netherlands, but also for Ukraine, because just like us, they will lose their freedoms." For example, "under this treaty, they are supposed to notify Brussels of any changes in their national law; so they effectively become like a colony."

In Houwelingen's view, Europe should keep out of Ukraine, instead of MEPs standing on the Maidan, shouting and supporting the coup plotters. "It's a very delicate situation, and the European Union comes in and it becomes a civil war."

© Sputnik / Ekaterina Shtukina
Russia to Stop Preferential Trade Treatment for Ukraine by Yearend
The activists compared European politicians' behavior with a hypothetical scenario where the Russian president would go to Catalonia and call on the population to break from Madrid. "That's what the European Union is now doing inside Ukraine. They are involved in affairs which should be none of their concern."

Houwelingen noted that organizers have high hopes for the referendum, saying there would be added drama over the fact that the Netherlands is set to become the EU's chair next year. "[It's] a nice coincidence, and we're looking forward to it."

Consensus on Ukraine-EU Association Unlikely by 2016 in Current Conditions