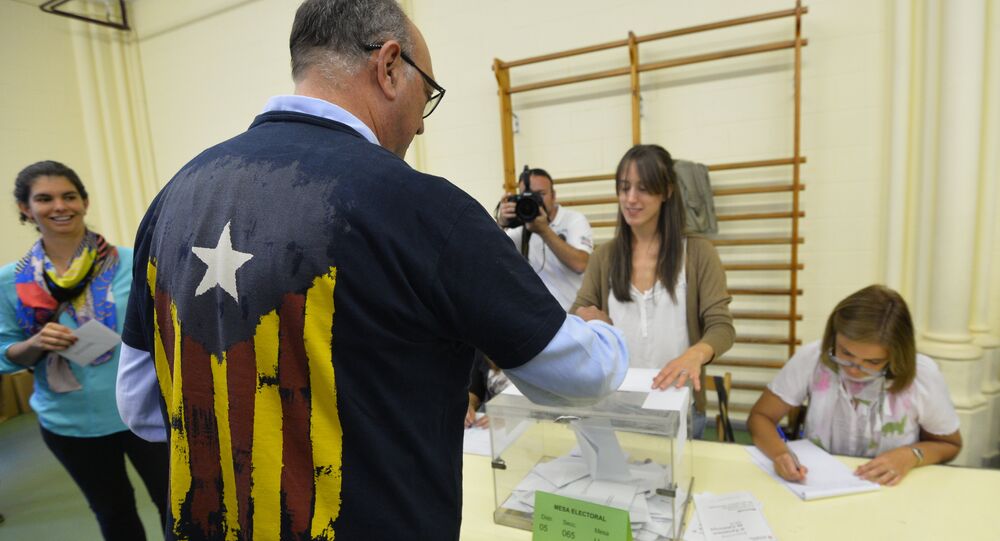 Catalonia is set to vote in regional elections on Sunday, in what has been described as a virtual independence referendum. It could also challenge Spain as well as Europe itself as a new state could be the first territory to leave the European Union.

Catalonia's regional elections on Sunday have been considered as crucial for the region's future within Spain.

"Today is a great win for democracy in Catalonia. We have surpassed all the obstacles placed by the Spanish government. Now, Catalonia faces its own destiny," Catalan leader Artur Mas said.

By 1 p.m. local time, turnout reached 35 percent, according to the official elections website, surpassing the turnout in previous elections.

The region's president pledged to declare unilateral independence from Spain if the pro-independence parties win, even if they do not gather an absolute majority of votes.

Catalonia held a non-binding vote in 2014, in which over 80 percent of voters backed independence. However, the vote has been plagued by its non-binding status and Spain's claims that it was illegal, making the turnout numbers more questionable.

© AFP 2020 / QUIQUE GARCIA
EU 'Will Force' Spain to Recognize Catalonia as Independent State
The pro-independence parties seek to establish independence within 18 months after the election, while sovereignty was already declared in 2013.

Spain has previously blocked referendums for Catalan independence, making this election a forced choice for voters. At the same time, Catalonia's intentions to declare unilateral independence would be illegal according to Spain's constitution.

Because of this, some in Spain believe that Catalonia would take more symbolic measures rather than full-fledged independence.

"Although Mas' re-election will test the unity of the secessionist movement, pro-independence parties will make symbolic moves towards a Catalan state if they obtain a majority, prolonging the stalemate with the central government," Antonio Varroso of risk consultancy Teneo Intelligence told CNBC.

Spain's threats would also potentially make Catalonia the first territory to leave the EU. The EU's spokesperson confirmed this in 2013, saying that

"[An] independent state, because of its independence, would become a third country vis a vis the EU and as of the day of the independence the EU treaties will no longer apply,"

© AP Photo / Emilio Morenatti
Catalonia Will Automatically Leave Eurozone if Declares Independence
This, however, would create difficulties not only for Catalonia, but also for Spain and the EU. Situated between France and the rest of Spain, Catalonia is an economic and transport hub. Catalonia has Spain's third-busiest port and second-busiest airport.

Catalonia is one of Spain's wealthiest regions with relatively lower unemployment compared to the rest of Spain with its chronically high unemployment.

Catalonia's economy makes up 19 percent of Spain's gross domestic product and only 6.3 percent of the territory. GDP per capita also remains higher than the national average. At the same time, pro-independence parties say that Spain takes in more of Catalonia's tax revenues than it brings back.

© AFP 2020 / QUIQUE GARCIA
Friday Independence Rally in Barcelona to Become One of Largest in History
While Catalan politicians seek to establish a new central bank, it is unclear whether they intend to create a new currency or continue using the euro.

"We have surpassed all the obstacles placed by the Spanish government. Now, Catalonia faces its own destiny," Mas said on Sunday, as cited by AFP.

The pro-independence parties also seek more cultural autonomy, which has been a part of Spain in one form or another since the year 1137. Catalonia’s current conflict with the Spanish government goes back to a dispute over a new Statute of Autonomy. It was approved in 2006, expanding the autonomy’s rights.