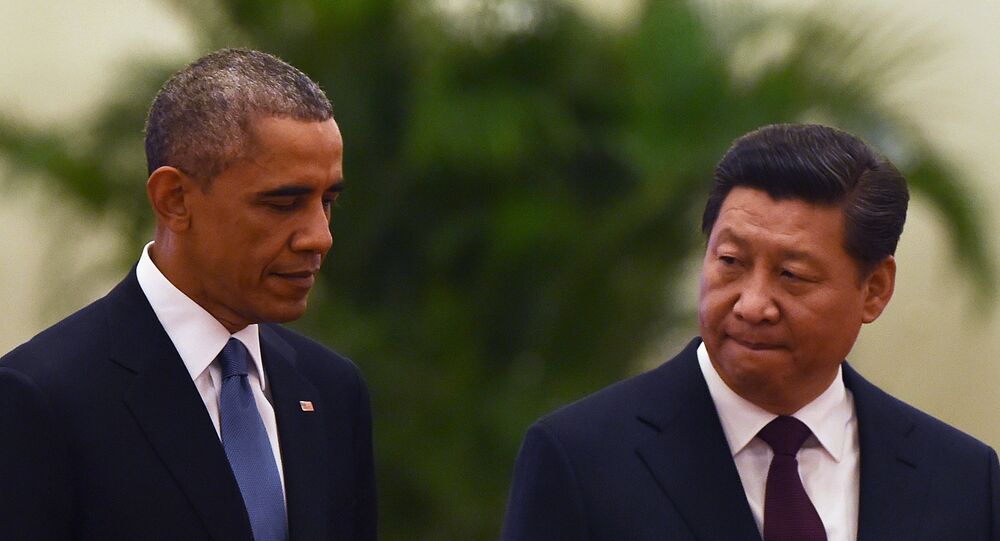 WASHINGTON (Sputnik) — President Jinping’s trip to Washington comes as US authorities investigate a cyber-attack on the Office of Personnel Management that investigators reportedly believe is the handiwork of Chinese hackers. Beijing has denied any involvement in the security breach.

The US-Chinese bilateral relationship has also been tried by the devaluation of the Yuan and what the United States perceives as Chinese aggression in the South China Sea.

The United States reportedly aims to convince China, during this visit, that Beijing needs to share responsibility for sustaining what White House advisors referred to as "the rules-based international order" that they believe has "benefitted China and enabled its rise."

Obama will not "paper over differences" that Washington has with Beijing, US officials claimed earlier this week, and will have frank conversations with Jinping on cybersecurity, currency valuation and domestic anti-corruption reforms.

© AP Photo / Gerald Herbert
Obama Has No Plans of Meeting With Iran President at UN General Assembly
The US President also plans to address serious concerns the United States has about China’s overall lack of legal and regulatory transparency, inconsistent protection of intellectual property and discriminatory cyber and technology policies.

Jinping, for his part, plans on reassuring Obama that China’s economy is strong and healthy in the wake of Beijing’s recent stock market crisis and will encourage US companies to do more business with China.

Climate change, counterterrorism and disaster response will also be on Obama and Jinping’s agenda on Friday, in addition to human rights, the Iran nuclear agreement and North Korean denuclearization.

President Jinping, who arrived in Washington on Thursday, will be greeted by an official arrival ceremony on Friday followed by meetings at the White House and a joint press conference with Obama.

Vice President Joe Biden and Secretary of State John Kerry will then host President Jinping and Madam Peng Liyuan at the State Department for lunch, followed by a state dinner at the White House with the President and Mrs. Obama.

US Hands Chinese Corruption Suspect Over to Beijing

Washington Still Unable to Reconcile Itself to China's Rapid Rise