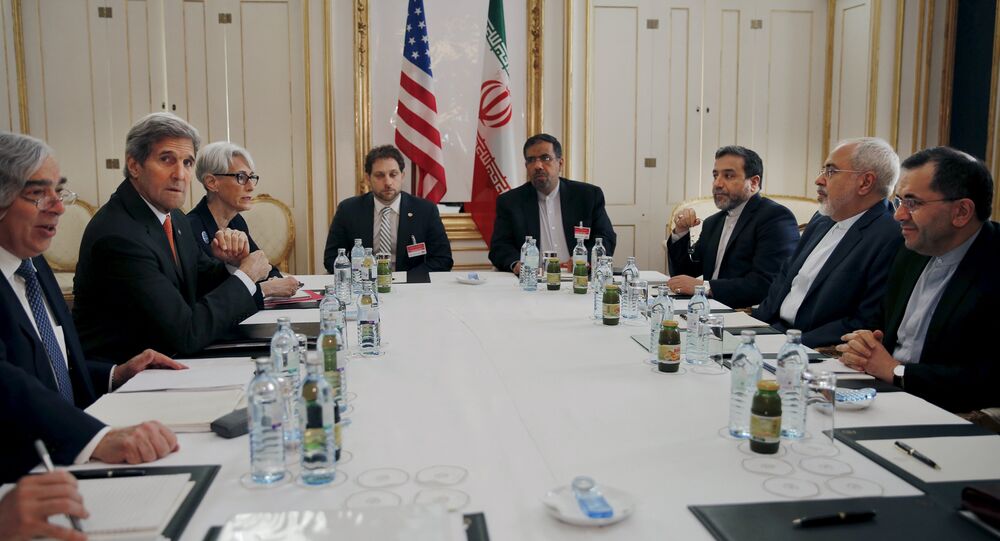 The NSA intercepted and spied on all telephone calls and correspondence, as well bugged the hotel rooms of all 143 members of the Iranian delegation, including then-President Mahmoud Ahmadinejad, during the 62nd UN General Assembly in New York in 2007, NBC reported.

The NSA listened in on thousands of conversations and spied on the social network accounts of the Iranian delegation members.

Advisor to the Chairman of the Mejlis (Parliament) of Iran for International Affairs Hossein Sheikholeslam spoke to Sputnik in an exclusive interview.

“Our security team warned us that we would be followed and eavesdropped on. Naturally, we were ready for it and took appropriate action.”

© REUTERS / Yuri Gripas
US to Challenge Iran’s 'Destabilizing Policies' With All Tools - Kerry
The advisor further said, “That story is confirmation of two facts. Firstly, that the NSA collected information and delivered it to Mossad. Secondly, that today relations between the US and Israeli intelligence services is not at their highest level of mutual trust.”

There is no doubt that employees of the NSA provided and continue to provide information to the Israeli side. The information includes the results of major forums and negotiations with the participation of the high-ranking Iranian delegation.

“It was the same in New York in 2007 and it is so right now. During the nuclear deal negotiations between the Iranian diplomats and the ‘six’ in Vienna of this year, there was wiretapping. The bugging, to my knowledge, was conducted by the US side and Israel at the same time. Mossad even developed and applied a computer virus for this purpose (the virus was discovered in June by the Russian Kaspersky Lab specialists.)”

Sheikholeslam further explained that the whole scenario points at a level of low trust between the American and Israeli intelligence. Tel Aviv, unleashing a scandal with the launch of the virus, makes it clear that it cannot completely rely on information received from its overseas partner.

“Therefore, the Israeli security services have to sniff out secret information on their own, literally under the noses of the Americans. Even this scrupulous work does not bring proper results. Mossad found nothing new in Vienna,” the advisor said.

There was this case when the Islamic Republic responded to a cyber-attack using the Stuxnet virus in 2010, strengthening its own cyber technology. Today our antivirus systems operate efficiently, without any interruption.

“Thus, this wiretapping story and then the computer viruses urge members of our high-ranking delegations to maintain the utmost vigilance, not to succumb to provocations and continue to work productively, in particular during the next UN General Assembly,” Sheikholeslam concluded.

Iran Has No Plans to Restore Diplomatic Relations With US

US to Use 'Military Options' if Iran Violates Nuclear Deal - Obama