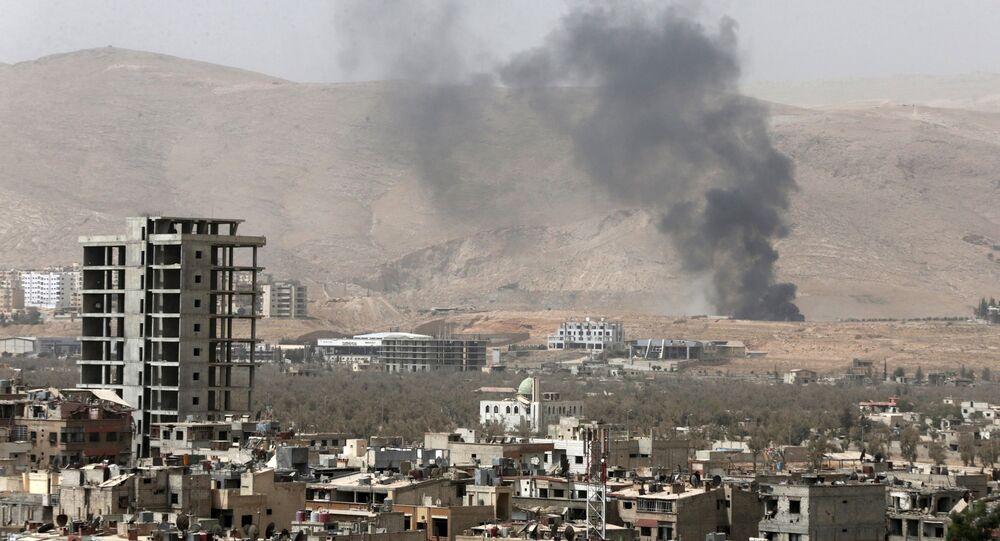 It is US neocons and interventionists who bear the responsibility for the current refugee crisis in Europe, Dr. Ron Paul emphasizes, commenting on the recent US trend to accuse those who criticize America's foreign policy of "blaming America first."

© AFP 2020 / STR
Is US Attempt to Change Regime in Syria All 'About Oil and Pipelines'?
There are many ways to avoid a "real" discussion and divert public attention from social and political problems, former US congressman Ron Paul remarks, stressing that unwise US foreign policy conducted by American interventionists have backfired in Europe.

"It has become common to discount any criticism of US foreign policy as 'blaming America first.' It is a convenient way of avoiding a real discussion. If aggressive US policy in the Middle East — for example in Iraq — results in the creation of terrorist organizations like al-Qaeda in Iraq, is pointing out the unintended consequences of bad policy blaming America?" Dr. Paul asked in his article for the Institute of Peace and Prosperity website.

According to the former American congressman, the ongoing refugee crisis in Europe is "largely caused by bad US foreign policy actions."

"The US government decides on regime change for a particular country — in this case, Syria — destabilizes the government, causes social chaos, and destroys the economy, and we are supposed to be surprised that so many people are desperate to leave? Is pointing this out blaming America, or is it blaming that part of the US government that makes such foolish policies?" Dr. Paul emphasized.

Curiously enough, the trend of targeting those who "blame America" is "very selective," he notes.

© AP Photo
Ron Paul: West Sparked Refugee Crisis by 'Pushing 'Democracy' at the Barrel of a Gun'
US neocons were up in arms about Barack Obama's decision to pull US troops out of Iraq. American interventionists even go so far as to claim that the current crisis in Iraq is a result of withdrawing of US military personnel from the country.

"Are they 'blaming America first' for the mess? No one ever says that," Dr. Paul pointed out.

Furthermore, US interventionists remain suspiciously silent regarding what lay at the root of the White House's decision to remove American troops from Iraq.

© AP Photo / Khalid Mohammed
No Nation 'Has Ever Threatened Humanity's Survival' More Than US
America's meddling into Iraqi domestic affairs undermined a fragile balance between the Sunnis and the Shiites in the country. After the US invasion the Iraqi government was formed by politicians closely allied to Iran, "and the Sunnis could not live with that."

"It was not the US withdrawal from Iraq that created the current instability but the invasion," the former US congressman stressed, drawing parallels between the US Iraqi military campaign and current Washington efforts to topple Syrian democratically elected President Bashar al-Assad.

"How many Syrians were streaming out of Syria before US support for Islamist rebels there made the country unlivable?" Paul asked.

"I don't blame America. I am America, you are America. I don't blame you. I blame bad policy. I blame the interventionists. I blame the neoconservatives who preach this stuff, who believe in it like a religion — that they have to promote American goodness even if you have to bomb and kill people," the former American congressman underscored.

'Sole Superpower' in Decline: US Losing Its Grip on the Middle East