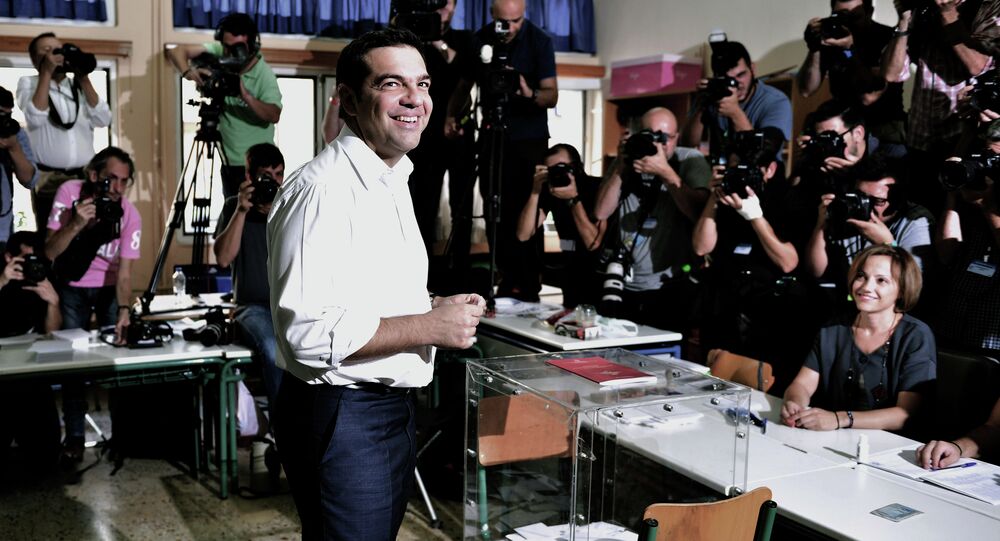 Syriza Takes 35.5% of Vote in Greek Election, Ahead of New Democracy

As 50 percent of votes counted, Syriza secured 35.5 percent of the ballot, while the center-right New Democracy, led by Vangelis Meimarakis, got 28.1 percent, followed by the far-right Golden Dawn party with 7.1 percent, according to official estimates.

© REUTERS / Michalis Karagiannis
Greece's PASOK Ready to Create Coalition With Syriza
ATHENS (Sputnik) — The Greek left-wing party Syriza has received up to 34 percent of the vote, leading its nearest rival, the conservative New Democracy party by some 1.5 percent in the national snap elections, according to exit polls data obtained by Sputnik.

Syriza has secured between 30 and 34 percent of the ballot, while the center-right New Democracy, led by Vangelis Meimarakis, is on between 28.5 and 32.5 percent, followed by the far-right Golden Dawn party with 6.5-8 percent.

Preliminary exit-poll figures indicate that a total of seven to nine parties have passed the three-percent threshold in order to be represented in parliament.

The information is in accordance with the Metron Analysis pollster’s data.

© AFP 2020 / Louisa Gouliamaki
Syriza Leader Tsipras Discusses Possible Coalition With ANEL Head
Data after 50% counted says that Greece's Syriza party leads in parliamentary elections with 35.5% of votes while New Democracy party gets 28.1% and the Golden Dawn party with 7.1 —percent support, as 50 percent of votes were counted, according to official estimates.

PASOK has received 6.4 percent of votes so far, KKE — 5.5 percent, Potami — 3.9 percent, ANEL — 3.7 percent, according to Singular Logic, the company that officially covers the logistics of the Greek snap elections.

If the current statistics persist with all the votes counted, Syriza will receive 145 seats in parliament, while the New Democracy and the Golden Dawn parties will receive 75 and 19 seats accordingly out of the total of 300 seats in the Greek parliament.