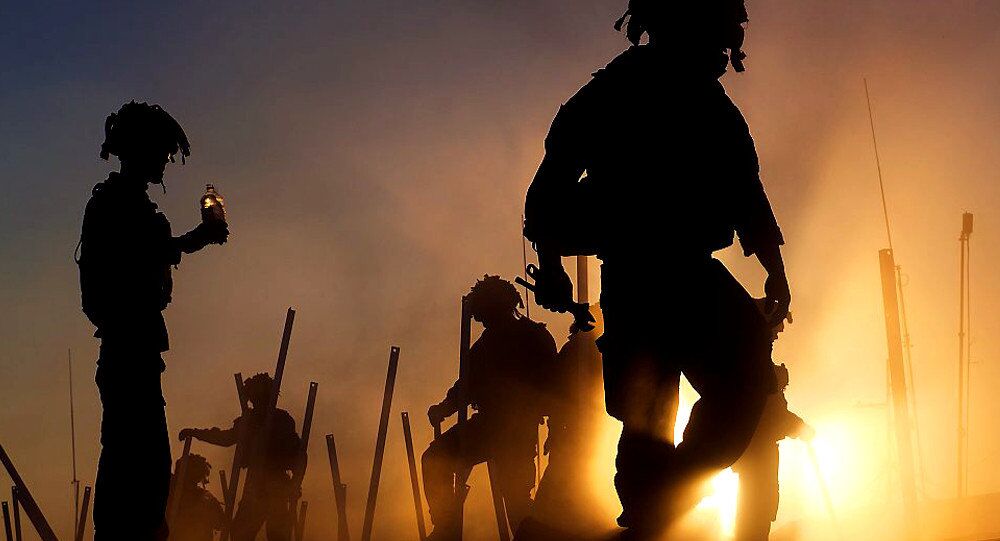 The specter of an undeclared third world war is prowling around the Middle East, British author David Morgan notes, suggesting that seemingly separate conflicts in Syria, Ukraine, Turkey, Iraq and Iran could be parts of a "grand plan."

© AP Photo / U.S. Air Force via AP
Is Washington Preparing for New Military Operation in Syria?
The West is doing whatever it takes to shame Russia for its involvement in Syria; however, Syria is just a zone in a "much wider" war the West is currently waging against Moscow and its allies, British author David Morgan points out.

"The same confrontation also occurs in Ukraine and formerly in Georgia, where Russia successfully halted, albeit temporarily, the Western advance. This amounts to a new Cold War or an undeclared war where East and West are once more in global confrontation," Morgan elaborated in his article for London Progressive Journal.

According to the author the primary cause of the current refugee crisis in Syria is the West's notorious "regime change" strategy.

"To date the policy to unseat Assad has failed miserably despite the West's imposition of punishing economic sanctions, its bombing of the country and the sponsoring, financing and training of what are little more than terrorist mercenaries," Morgan emphasized, stressing that it is virtually impossible to distinguish the so-called "moderate rebels" from the Islamic State terrorists.

© AP Photo / Lefteris Pitarakis, File
EU Migrant Crisis: Coincidence or Plot Aimed at Starting Military Operation in Syria?
After it failed to oust the democratically elected Syrian government of Bashar al-Assad, the West is seemingly intent on exploiting the deplorable conditions of the Syrian people: it is using the civilians' desperation to undermine the Damascus' sovereignty.

"From this perspective the generous German 'offer' to take in 500 thousand Syrian refugees a year can be interpreted as a cynical strategic ploy to persuade the Syrian population to break their attachment to Russia's last remaining ally in the Middle East," Morgan noted.

The author called attention to the fact that "the most able-bodied members" of Syria's population are fleeing from Syria, while the country needs them to help restore its economy in the future.

At the same time, the West remains silent about Russia's substantial role in assisting Syria to fight the Islamic State. Washington and its NATO allies are also ignoring the fact that Moscow, Damascus' longstanding partner, is providing technical and humanitarian aid to Syria under existing contracts.

© Flickr / The Official CTBTO Photostream
Nuclearization of EU: Europeans Feel Increasingly Betrayed by Washington
Furthermore, there is something sinister about the West's "inability" to eliminate or at least contain the ISIL threat. It seems that the US' top priority is to topple Bashar al-Assad. Since Washington has not yet "formed" a plausible puppet government for Syria, it is most likely the vacuum will be filled by the Islamic State extremists.

"The end result of the conflict in Syria could be that ISIS (ISIL) will come to rule and it could even eventually head a pro-Western state. This outcome is not really so farfetched if one considers the repressive nature of some of the West's other long-term allies in the region and around the world," Morgan emphasized, adding that Washington and Western Europe have never had problems in dealing with ruthless dictators.

According to the author, the West's "grand plan" also includes Ukraine's longstanding conflict, the current Turko-Kurdish standoff, the Gulf-Baathist conspiracy against the present Baghdad regime and projects aimed at weakening Tehran's positions in the Middle East.

"Syria, Ukraine, Turkey, Iraq and Iran. These are seemingly separate conflicts with different causes and their own self-contained solutions, but underlying them there is a grand plan which is to exert control over a strategically vital region and by so doing gain possession of its rich resources," Morgan highlighted.

"These conflicts are related zones of engagement within this overarching conflict. It amounts to an undeclared world war," he warned.