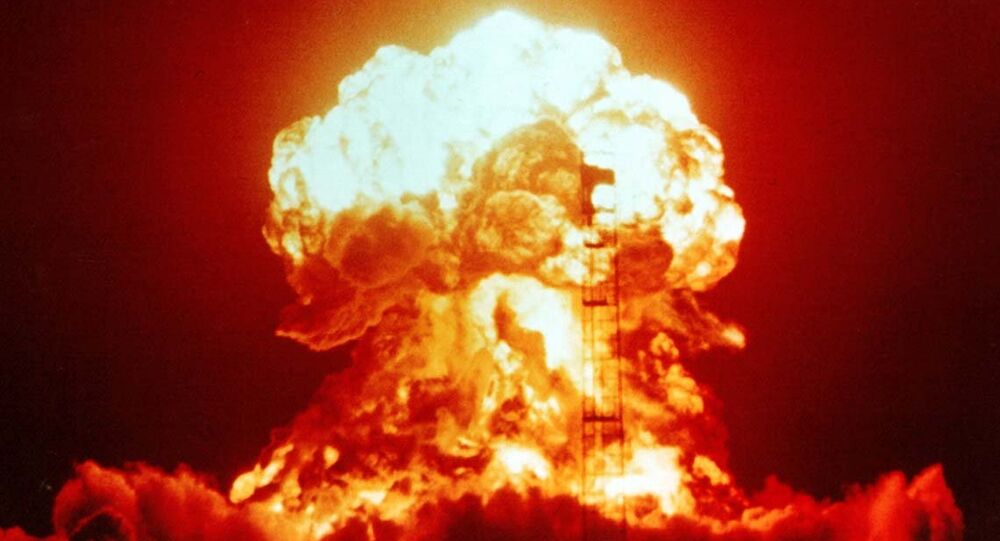 NATO's image as a protector has lost much of its splendor, prominent French journalist and founder of Agora Erasmus political organization Karel Vereycken told Sputnik, adding that Europeans feel increasingly betrayed by US leadership.

In an interview to Sputnik Karel Vereycken, director of the publication Nouvelle Solidarité and founder of the Lyndon LaRouche associated Belgian Agora Erasmus organization shared his views regarding NATO's provocative nuclear modernization in Europe, Europeans' growing disenchantment with America's foreign policy and the ongoing refugee crisis.

Agora Erasmus, a Belgian political organization, has drawn up a petition against the modernization of NATO's nuclear weaponry. The initiative has brought together politicians of SP.A (Flemish socialists), Groen (Green Party) and the PS (Parti Socialiste in Wallonia). Agora Erasmus stresses that in light of the tensions between Russia and the West over Syria and Ukraine the move evidently gives "the wrong signal" and may eventually lead to a new arms race.

But what do Europeans really think about NATO and its bellicose anti-Russian sentiment?

© Sputnik / Yury Artamonov
Europe Needs Russia, Not NATO to Ensure Regional Security – Swedish Politicians
"The political class of Belgium often behaves as miserable slaves of Washington. After all, NATO's headquarters are located in the suburb of the Belgian capital Brussels. Neocons such as Robert Kagan (the husband of Victoria Nuland) used to live in this area and Robert Cooper, an outspoken enemy of national sovereignty and a partisan of recreating an Anglo-American empire, remains an adviser to the EU Commission and a member of the Soros financed European Council on Foreign Relations," Vereycken told Sputnik.

"However, one could say that NATO's image as a protector has lost much of its splendor. As long as an occupying power offers protection and some material comfort, people can somehow accept to go along with it. But today, the global financial order of the City of London and Wall Street only brings unemployment, despair and chaos, pretty similar to the Habsburg rule that provoked the revolt of the Low Countries in the XVIth century," the journalist underscored.

According to the journalist, the Western media is portraying Russia and President Vladimir Putin as "would be Napoleons." However, the Belgian people, for instance, are displeased much more with the media and their own politicians than with the Russian leader. Despite recent tension, Russo-Belgian historical ties still remain strong.

"2,400 Belgian firms work with Russia. Before the Russian counter-sanctions against Belgian fruit and vegetables, Russia was importing each year over 5.4 billion euro of Belgian products, of which 30% were agro industrial products, 32.1% chemical products, 15.5 % machine tools, 13.3 % transportation equipment and 10 % synthetic products. The petrochemical cluster of Antwerp, the world's second largest after Houston and one of the largest bulk ports of Europe, heavily depends on Russian suppliers," Vereycken pointed out.

"In my mother tongue, Flemish, we keep using the word "naft" to designate gasoline because the Russian firm NAFTA is a large supplier for refined oil products. In the old streets of Antwerp, we also have a beautiful statue of Peter the Great who once came to Antwerp for training as a shipbuilder in the Netherlands," the journalist noted warmly.

Obama's Broken Promises: Denuclearization of Europe That Never Was

Karel Vereycken highlighted that all over Europe people feel increasingly betrayed by US President Barack Obama. To complicate matters further, NATO is pushing ahead the modernization of its B-61 nuclear weapons stationed in Belgium, Germany, the Netherlands, Italy and Turkey. About twenty of these deadly warheads are currently located at NATO's Kleine Brogel airbase, in Belgium.

"In 2009, Obama, speaking in Prague promised a world without nuclear weapons. On Feb. 19, 2010, four important Belgian politicians (Guy Verhofstad, Louis Michel, Jean-Luc Dehaene and former NATO general secretary Willy Claes) signed an opinion piece saying: 'The American military tactical nuclear weapons in Europe have lost their utility. The remaining political usefulness — as a symbol of the Transatlantic alliance — is largely insufficient to keep them, knowing that we give in this way a signal to the rest of the world saying that nuclear weapons are 'necessary''," Vereycken told Sputnik.

"The Nobel Prize Committee should meet and admit to the world 'we have been wrong, Obama should never have gotten the Peace Price'," the journalist stressed.

In contrast, today the pacifists "are sleeping or too absorbed in their videogames," the journalist noted bitterly.

Meanwhile, "the US and NATO, which have declared a new cold war against Russia, asked the Belgian government to reopen a military base in Zutendaal, currently used for the archives of the Belgian army, to serve for transiting US weaponry to Eastern Europe where NATO is organizing its largest maneuvers ever," he noted.

The journalist pointed out that although the West promised the USSR it would not expand NATO toward Russia's borders after the fall of the Berlin Wall, Washington and NATO have violated their own commitments. And it has not remained unnoticed in Europe.

Maybe it is time to disband NATO, Karel Vereycken suggested.

"This [dissolution of NATO] was implicitly recommended on August 7, 2014, by Katlijn Malfliet, a renowned Russia expert at the Leuven International and European Studies (LINES) center (of that Belgian University), who expressed her worries about western sanctions against Russia since they 'could only worsen the situation on both sides' and called for the creation of a 'new international security architecture'," he underscored.

And there is a viable alternative for the US-led global political architecture, and its name is the BRICS,  Vereycken emphasized, adding that Antwerp Port, which trained many Chinese infrastructure experts, just recently created a 'Silk Road task force' to explore full cooperation with all the BRICS countries.

"The root causes of the refugee problem are the decades of IMF policies starving the southern hemisphere and the NATO wars conducted successively in Yugoslavia, Iraq, Afghanistan, Libya and Syria over the last decades," Vereycken elaborated.

© Wikipedia
Solution to Refugee Crisis: Stop US, NATO 'Reckless Military Operations'
"The transatlantic financial system, based on Ponzi schemes and financial bubbles, is hopelessly bankrupt. As former Greek finance minister Yanis Varoufakis would say, the 'global Minotaur' has been dead since 2008 and now needs a funeral. The danger comes from the fact that war and chaos are increasingly considered by some as the ultimate means for the survival of the oligarchic power structure," he added.

Agora Erasmus hopes that President Putin will continue to turn the tables on the Syrian crisis and will urge world leaders to form a global alliance against Islamic State (ISIL) at the UN Jubilee General Assembly in New York.

"Russia's role in the solving the Iran crisis was exemplary and the way it was handled should serve as a model for solving the Syria crisis today. Military action, including with the US, should not be excluded but uprooting the financial operations of ISIL, which go through Turkey and the London banking nexus, is the most efficient and urgent action currently required," Vereycken told Sputnik.

According to the journalist, genuine comprehensive cooperation between Europe and the BRICS could offer win-win solutions for all the parties.

"Ending this new stupid cold war between the West 'and the rest' would put an end to the wars and allow refugees to use their skills and creative minds to reconstruct their home countries. The EU has in any case its back against the wall, since the refugee crisis is unsolvable inside the financial and political parameters of the current system," he underscored.

"Only a new political, financial and security order, based on investment in the future, would allow humanity to rise out of the mud of suicidal self-destruction. The time has truly come to finally learn the lessons of history. Failure is not an option," Karel Vereycken concluded.