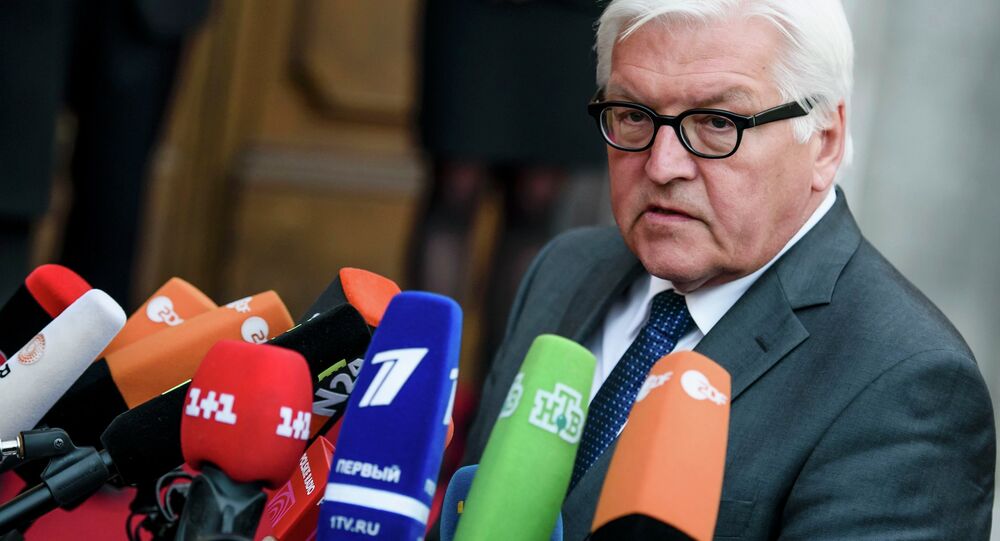 German Foreign Minister Frank-Walter Steinmeier said that the Normandy Quartet meeting in Berlin on Saturday was less confrontational than before.

BERLIN (Sputnik) — The conflict in eastern Ukraine has not simplified, but the Normandy Quartet ministerial meeting in Berlin on Saturday was less confrontational than before, German Foreign Minister Frank-Walter Steinmeier said after the meeting.

"It has not become easier, but I would like to inform you that the talks were far less confrontational than they were the last time," Steinmeier said.

© Sputnik / Eduard Pesov
Normandy Four Foreign Ministers Satisfied With Generally Holding Ceasefire - Lavrov
“We have made a not such a big advance as I would have hoped, but today, thanks God, we had a different kind of a debate, not like those we had during the last two meetings,” Steinmeier said.

“I hope that with the help of today’s meeting we have made a contribution, which would lead to further de-escalation in eastern Ukraine, and that it would become a preparatory work for the meeting of the presidents [Russian, French and Ukrainian] and the chancellor [of Germany] on October 2, where the reconciliation process could continue,” Steinmeier added.

The Normandy Quartet foreign ministers have made a significant advance during the talks in Berlin with regard to certain issues, including ensuring security in eastern Ukraine Steinmeier noted.

"I hope that in certain issues we have significantly advanced. For instance, we have reached solidarity on the whole scope of security issues [in eastern Ukraine] that we discussed," the minister said.

The foreign ministers of the so-called Normandy Quartet, namely Ukraine, Russia, France and Germany, discussed the peaceful settlement of Ukraine's crisis at Villa Borsig in Berlin on Saturday. The talks took place ahead of the Normandy Four leaders meeting on October 2 in Paris.