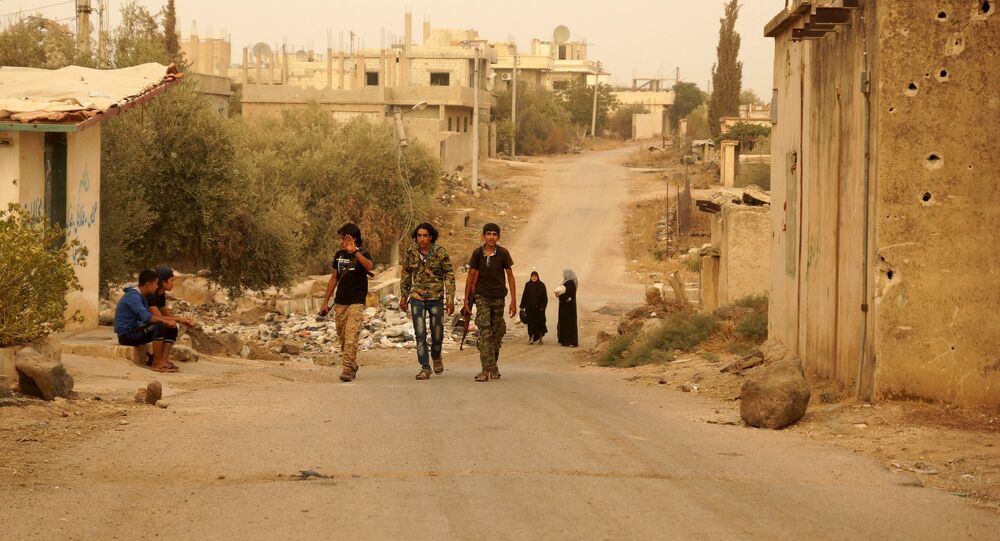 The Norwegian newspaper Dagens Naeringsliv laments that Europe has fallen into a postmodernist stupor characterized by a lack of leadership and political will, and that Russia needs to shake Europe's leaders out of this state in order to solve the Syrian conflict, which has resulted in the ongoing refugee crisis.

The refugee crisis facing Europe must force its politicians to return to the principles of realpolitik in order to solve the Syrian crisis, by making political decisions based on reality and not a "postmodern paradise" that denies responsibility for the plight of millions forced to leave their homes in the Middle East, political scientist Janne Haaland Matlary wrote in the Norwegian newspaper Dagens Naeringsliv on Friday.

© Sputnik / Vladimir Pesnya
Russia to Continue Delivering Military Equipment to Syria
Citing the disastrous 2011 military intervention in Libya as an example of the dangers of EU and US foreign policy, the author, a professor of Political Science at the University of Oslo, warns that attempts to remove Syrian President Bashar al-Assad from power will only lead to a power vacuum, and a greater crisis.

"We created a power vacuum [in Libya], which was quickly filled by a variety of militias and terrorist groups, earning massive incomes on the illegal transportation of refugees and migrants."

"The parallels with Syria are obvious. Is it not better to take a political decision which chooses the stability of a dictator to a 'Libyan scenario'?" asks Matlary, a member of Norway's Conservative Party and former representative of the Christian Democratic Party, who served as Norway's State Secretary for Foreign Affairs from 1997-2000.

© AP Photo / Mohamed Ben Khalifa
War, Chaos & Irony in Libya: The West’s 'Most Successful' Mission
Europe's failure to take the correct political decisions, writes Matlary, is a consequence of its unwillingness to "dirty its hands in the world of realpolitik"; instead "it behaves in an amoral way, placing responsibility on others to regulate the situation in neighboring regions."

"But the ugly truth is that Europe is itself facing a power vacuum, because the US is ever more reluctant to take the lead in solving problems at its borders."

"The tragedy is even deeper than a simple deficiency of political will to [show] leadership – Europe has also removed from its arsenal the measure of realpolitik, and turned into a postmodernist paradise, the main asset of which is the power of attraction."

"Refugees are not trying to reach countries that are similar to their own, but Germany and Sweden. The irony lies in the fact that the power of attraction will give birth to the necessity for Europe to again return to realpolitik – the most politically incorrect thought which can occur to someone in Berlin or Stockholm."

In the article, entitled 'While we wait for Russia', Matlary advises that instead of looking to the US for leadership, European governments should take their lead from Russia's realistic political approach to the crisis, which provides support to the embattled Syrian President in fighting the Islamic State. Iran is also ready to support the peace effort, adds the author, while the US and Saudi Arabia must also make their contribution.

© Sputnik
Syrian troops shoot at the Islamist forces' positions near Al-Zabadani in Syria
"Since the beginning of the civil war in Syria, Assad has been transformed from the main problem to an incidental one. The Islamic State is the target of airstrikes by the US-led coalition, and Russia and the West agree that the terrorist group is enemy number one. They disagree on whether Assad is enemy number two."

"The time has come for the West to accept, that as a consequence of the peaceful regulation of the Syrian crisis, Assad will remain in power for some time. The most important task now is to reach peace and stability. However, the EU insists that Assad has to go. That's not too clever, insofar as Europe is not ready for military intervention in the conflict, and therefore has no influence on the situation 'on the ground.'"

Instead of demonstrating such unrealistic intransigence, advises Matlary, Europe needs to return to politics based on the principle of realism in order to bring peace and stability to the Middle East, and put an end to the conflicts that have forced millions of people to flee Syria.