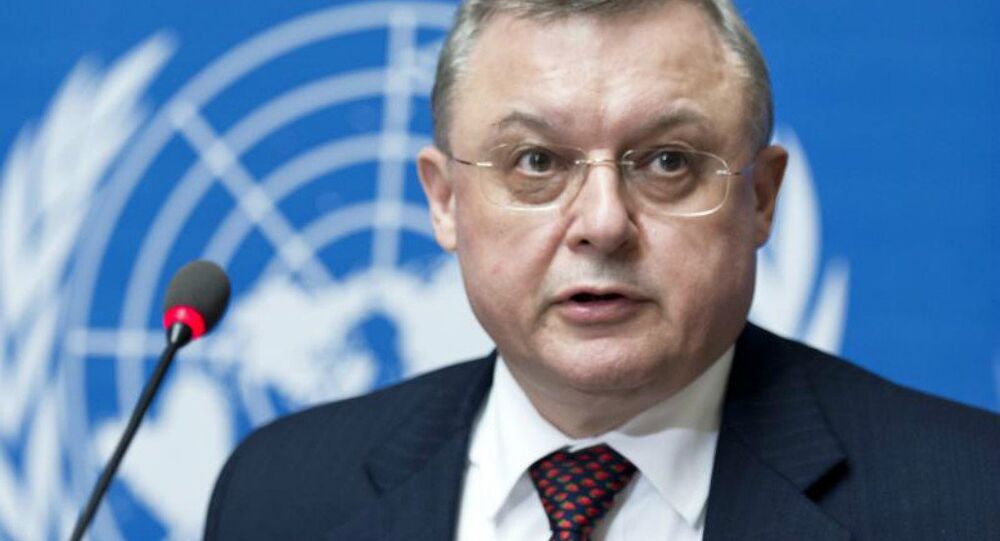 The Russian Foreign Ministry's Ambassador-at-Large and representative in the IAEA Board of Governors Grigory Berdennikov said that cooperation between Russia and Iran on exploring all aspects of the project to export Iranian low-enriched uranium in exchange for natural uranium is "in full swing."

MOSCOW (Sputnik) — The issue of signing an agreement between Iran and Russia on the removal of low-enriched uranium remains open, the Russian Foreign Ministry's Ambassador-at-Large and representative in the IAEA Board of Governors Grigory Berdennikov said Friday.

Last month, the head of the Russian Foreign Ministry Second Asia Department, Zamir Kabulov, said that Russian and Iranian experts were preparing for a deal to export Iran's enriched uranium to Russia, adding that the talks on the issue were in progress.

"This is still an open issue," Berdennikov told RIA Novosti.

According to the official, cooperation between the two countries on exploring all aspects of the project to export Iranian low-enriched uranium in exchange for natural uranium is "in full swing."

© AFP 2021 / ALEXANDER KLEIN
Russia Concerned Over Confidential IAEA Reports Leak
"This is a complex and rather difficult project. We hope that will be able to reach mutually acceptable solutions to all issues," he said. "We are now working on technical details."

Under the agreement, among other points, Tehran is obliged to cut back its uranium enrichment and decrease the number of centrifuges in the country. In exchange, the West is obliged to gradually lift sanctions imposed on the Islamic republic, including resumption of exports and frozen energy projects.

Also Berdennikov stated that the IAEA is closely working with Iranian experts on issues regarding the Parchin military complex.

"Speaking of the military facility in Parchin, as far as we know, IAEA experts work closely with the Iranian side on this issue in the framework of the agreed road map," Berdennikov said.

© AFP 2021 / JOE KLAMAR
Iran Must Abide by Int'l Inspections of Nuclear Sites - US Congressmen
IAEA signed a Roadmap for Clarification of Past and Present Outstanding Issues with Iran alongside Tehran’s Joint Comprehensive Plan of Action (JCPOA), agreed to by the six world powers on July 14.

Allegations have been made against the nuclear watchdog, including that they would delegate verification activities at Parchin, in light of suspicions that illegal activity was occurring at the military site, and suggestions of wider "side-deals" with Iran, in stories released by US media over the summer.

Iranian Foreign Minister Mohammad Javad Zarif said the activities at Parchin were related to road construction and were non-nuclear in nature.

IAEA chief Yukiya Amano said, at the time, that the roadmap was "confidential information" he could not divulge because of the risk of damaging the organization’s credibility. He did, however, classify the accusations as "a misrepresentation."

Berdennikov said he was unaware of any side deals between Iran and IAEA and criticized media leaks of confidential reports prior to their review by board members.