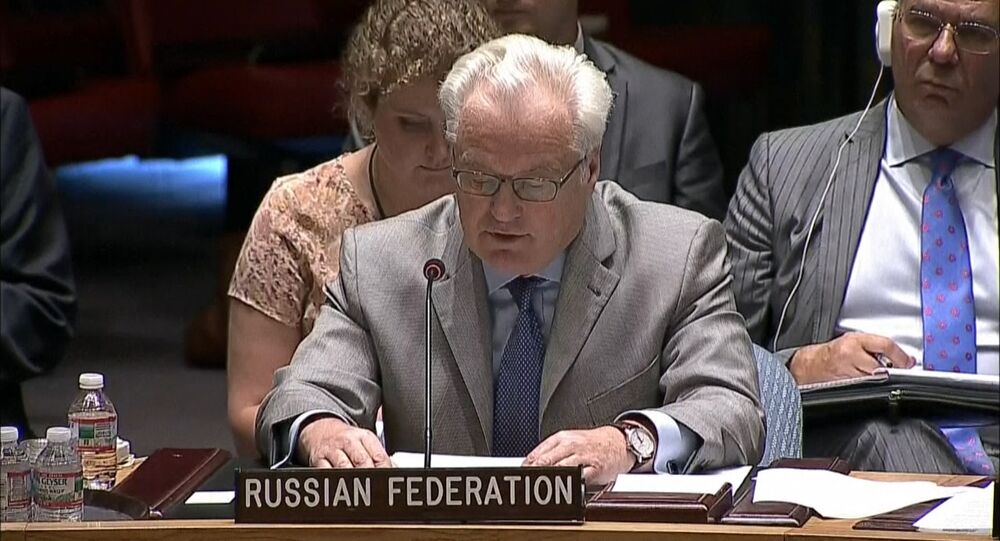 Kiev has not implemented a number of political aspects of the Minsk peace deal, including one on the special status of the Donetsk and Lugansk regions, Russia's Permanent Representative to the United Nations Vitaly Churkin has stressed.

© AFP 2020 / SERGEY BOBOK
Russia to Build Protective Fence on Border With Ukraine
UNITED NATIONS(Sputnik) – Kiev has not implemented a number of political aspects of the Minsk peace deal, including one on the special status of the Donetsk and Lugansk regions, Russia's Permanent Representative to the United Nations Vitaly Churkin has stressed.

The Russian envoy stressed, however, that there has been very little progress in implementing the political sections of the February 12th Minsk agreement.

"The political aspects have not been implemented. I was surprised when I see on television the president of Ukraine and other senior officials say, We are implementing the Minsk agreements, Russia is not implementing. No. Look up the text of the agreement and you see that in some areas they have done nothing," Churkin said, referring in particular to the sections on the special status of Ukraine’s southeastern regions.

© Sputnik / Alexandr Demyanchuk
Kiev to Declare Default if Parliament Rejects Debt Restructuring Proposal
Kiev and the self-proclaimed Donetsk and Lugansk People’s Republics (DPR and LPR) have been engaged in a military conflict since last year, when a special operation was launched by Ukraine's new coup-installed government against independence supporters in the country's southeast.

In February, after a meeting between the leaders of Germany, Russia, France and Ukraine in the Belarusian capital, Minsk, a ceasefire agreement was signed by the two sides.

The deal stipulates, among other things, a full halt to fighting, the withdrawal of weaponry from the line of contact between the conflicting sides, an all-for-all prisoner exchange and more autonomy for DPR and LPR.

Sporadic fighting continued in Ukraine after the February deal was signed. Both Kiev and the DPR and LPR militia have blamed each other for the violations.

The subgroups of the Contact Group on Ukraine, which includes representatives from Russia, Kiev, DPR and LPR, as well as the Organization for Security and Co-operation in Europe (OSCE), have been working on resolving political, economic, humanitarian and security issues after the Minsk deal was signed.

The Trilateral Contact Group on the settlement of the Ukrainian crisis was set up in 2014 in a bid to promote direct dialogue between Ukraine’s conflicting parties. The formation of the subgroups was stipulated by the February Minsk ceasefire agreement.

According to Churkin, the subgroups have been making gradual progress in resolving the remaining disputes between Ukraine’s conflicting sides.