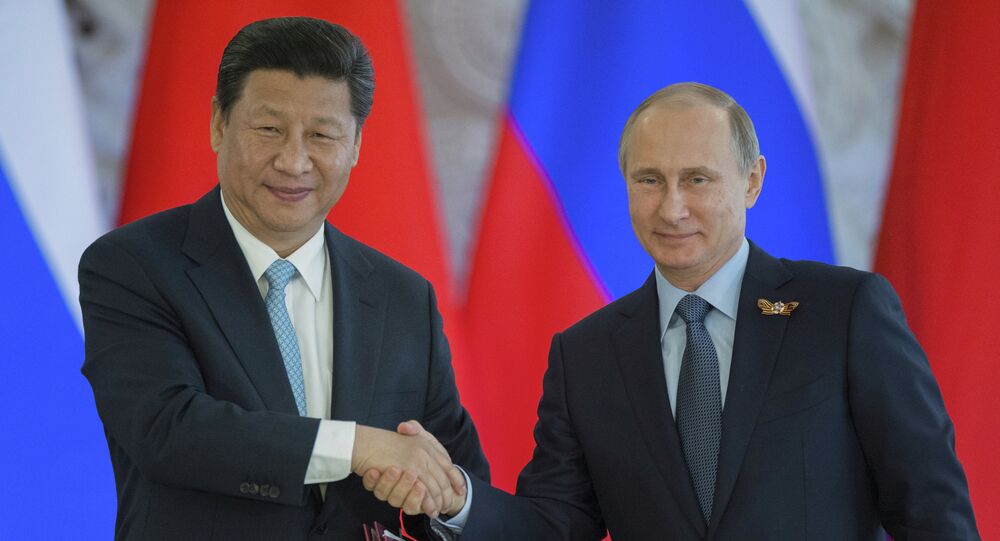 While some experts are rushing to accuse the Sino-Russian duo of posing a "threat" to the Western-led world order, the non-ideological and non-invasive alliance should not be seen as an antagonist of Western powers, Spanish scholar Augusto Soto stresses.

Seeing Sino-Russian alliance as the West's enemy is "a Manichean kind of view," Spanish analyst and expert in Asia Pacific and Eurasia affairs Augusto Soto emphasizes, adding that the alliance has a great potential for making contribution to the Eurasia's stability.

"Seeing China and Russia as enemies of geostrategic Western interests is a Manichean kind of view. In fact there is a lot of room for synergy between the West and the East that sometimes brings remarkable results. Consider, for instance, combined negotiating efforts to settle the Iran crisis, the cyclical appeasement of North Korea by delicate means, as well as the scale of trading and investment opportunities for China's vis-à-vis Western countries," Soto noted in his article for Strategic Culture Foundation.

According to the Spanish analyst, what we are witnessing is an outdated Western-centric geostrategic view that originated from Mackinder's early-XX century geopolitics:

It should be noted that China and Russia have indeed become more powerful and more influential now than it used to be after the end of the Cold War.

The countries are strengthening their ties through cooperation and enlargement of the Shanghai Cooperation Organization (SCO), the Asian Investment and Infrastructure Bank (AIIB), as well as through the decision to tie the Russian-led Eurasian Economic Union (EEU) with the Chinese Silk Road Economic Belt.

© AP Photo / Lefteris Pitarakis
China's Breakthrough: Beijing Gets Ready for Global Expansion
"[I]t is clear that one of the major prerequisites for a real multipolar world is the deterrence capabilities of the players. Both Moscow and Beijing as the champions of multi-polarism are aware of Washington's extraordinary defense budget. By acting together Russian-Chinese forces can pose a credible barrier in limited but highly strategic scenarios, including NATO's Mare Nostrum."

Soto pointed out that there are clear signals that Beijing want to strengthen cooperation with Moscow in the Asia Pacific and referred to the recent "Joint-Sea 2015 II" navy drills the countries have held in the Peter the Great Gulf, in Russia's Primorsky Region, from August 20 to 28.

Moreover, both China and Russia have a great potential for collaboration in Central Asia and the Caucasus regions: Beijing can benefit from the expertise Russia can offer with its projects in the regions in exchange for better conditions for Russian and EEU's interests in China, Soto noted.

"Of course, Russia-China ties have tasks ahead. First, if the West continues challenging Moscow in both strategic and cultural way, Russia's reliance on China will grow. To what degree? Impossible to say, but in any case Russia will keep in mind how important it is to maintain its role as a bridge between the East and the West in Eurasia," Soto pointed out stressing that the West should get rid of an illusion that Russia and China position themselves as Western antagonists.