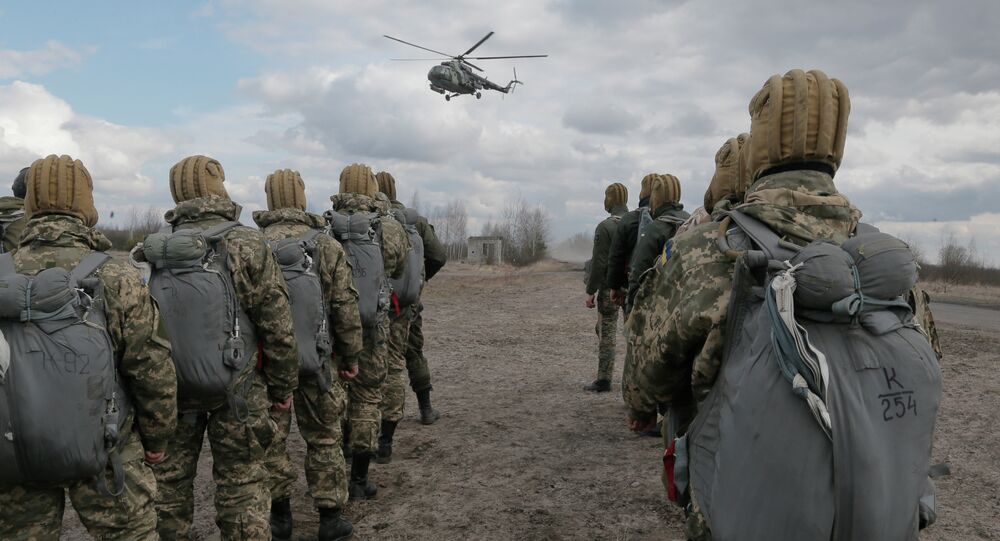 Kiev, backed by Washington, has already mobilized its military forces for an all-out war against Donbass, US author Stephen Lendman stresses, adding that President Poroshenko has proliferated numerous Big Lies about the Ukrainian civil war since taking office last year.

On August 22, 2015 during a military ceremony in the Ukrainian city of Chuguev (near the Donbass region) "illegitimate oligarch president Petro Poroshenko" claimed that Kiev used Minsk II to rearm and increase Ukraine's military might, turning a blind eye to the fact that the country is teetering on the brink of economic collapse, US author and syndicated columnist Stephen Lendman remarked.

According to DPR's Defense Ministry's intelligence, Kiev has stationed heavy troop and weapons concentrations near Donetsk, Debaltseve and Lugansk.

"Information has been received about the plan of forthcoming actions by the Ukrainian army from a source in the Ukrainian General Staff and, no matter how strange this may seem, there are still true officers there who do not want to fight against their own people," Basurin said as quoted by the US author.

© AP Photo / Geert Vanden Wijngaert
Does Ukraine's Future Still Lie With Europe?
It seems that the Kiev regime hopes its "blitzkrieg" will undermine Donbass' resistance and strike a lethal blow to DPR and LPR democracies. Still, the Ukrainian government has apparently forgotten that its previous vain attempts to subdue Donbass proved ineffective and ended ingloriously.

Meanwhile Poroshenko is banging war drums over the imaginary Russian threat, claiming that the Ukrainian government has partially bridged "the gap in military capacity [Ukraine] [has] against Russia."

"The times of air-headed pacifism and shortsighted rejection of security issues are forever in the past now," Poroshenko claimed, as cited by the American author.

Does Poroshenko want to unleash an endless war against the people of Ukraine?

Indeed, the Ukrainian leader's statements are "practically a declaration of permanent war on his own people, with full US support and encouragement," the author noted.

© AFP 2020 / Nikolay Doychinov
With Massive Exercise, NATO Generals Prepare for Yesterday's War
But the truth of the matter is that "Ukraine has no enemies except the ones it invents — complicit with Washington. Its military is solely for offense, belligerence, premeditated aggressive war, not defense. Only a lunatic would attack Russia. Kiev fascists rejected 'pacifism' since seizing power. Its police state policies wage war on its entire population. Maidan 2.0 is just a matter of time — likely much more violent than last year, perhaps making things worse than already," Lendman emphasized.

But Poroshenko has no credibility whatever, the author remarked, adding that it is really hard to imagine that anyone in the world takes the Ukrainian president seriously after he spread so many Big Lies about the Ukrainian civil war.

To complicate matters further, ordinary Ukrainians now despise him and his fascist counterparts for ruining their safety, well-being and future.

"[Poroshenko] has proliferated numerous Big Lies since taking office last year — an illegitimate rogue leader threatening to embroil central Europe and beyond in conflict, supported by his US paymaster and key arms supplier, one of many dirty secrets Washington wants suppressed," Stephan Lendman underscored.