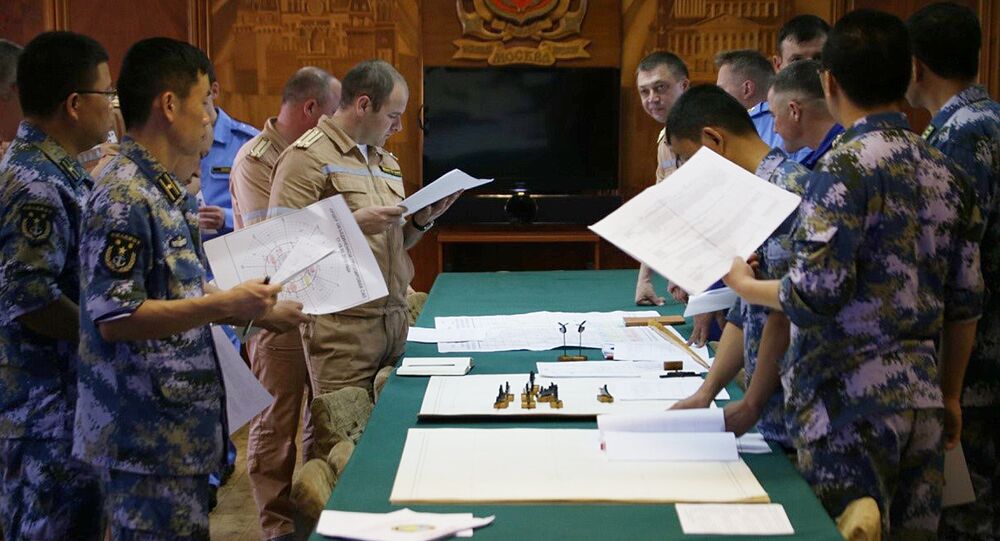 Russo-Japanese relations may go into a nosedive if Moscow chooses to form a security coalition with China in the light of the US' BMD deployments in Japan, Indian expert M. K. Bhadrakumar suggests, adding that Vladimir Putin's upcoming visit to China signals a future significant reconfiguration in the Far Eastern region.

© REUTERS / Damir Sagolj
'Great Drama' for US and Japan: China's Rise Threatens Unipolar World Order
A cooling in relations between Moscow and Tokyo are linked to the release of the new Guidelines for US-Japan Defense Cooperation on April 27, 2015 that envisages the deployment of the US ballistic missile defense systems (BMD) in Japan, former Indian Ambassador and expert in foreign affairs Melkulangara K. Bhadrakumar underscores.

The document originated from the 1979 Cold War era doctrine of the military cooperation between Washington and Tokyo aimed against Soviet Russia. The Guidelines were updated in 1997, after the collapse of the USSR. Remarkably, the doctrine has got a second wind after being revised this April.

"The backdrop of the latest revision of the document, under way since 2013, is no doubt provided by 'assertive' China. But there are profound implications for Russia, too. To be sure, Japan is now going to play a more active role in supporting the US-led operations globally," Bhadrakumar elaborated in his article for Asia Times.

"Specifically, the Guidelines emphasize the importance of US-Japan cooperation in the field of ballistic missile defense or the BMD. The US, in fact, has begun deploying the BMD system in Japan," the Indian expert stressed.

© Sputnik / Vitaliy Ankov
West is Mistaken in Calling Sino-Russia Drills ‘Muscle Flexing’
According to the expert, Russia no longer considers the US-Japan alliance as a "stabilizing factor" or a "balancer" in the region. Furthermore, the US-sponsored project of Japan's BMD is regarded as a substantial threat to Russia's Far East. It should be noted that Article 12 of Russia's military doctrine specifically refers to the threat posed by the country's neighbors equipped with BDM hardware.

"Japan foots the bill. Washington and Tokyo may take the line that they do not envision Russia as a threat to Japan and that the US-Japan alliance does not target Russia as such, but in the present climate of Russian-American relations, Moscow is not going to be lulled into complacency," Bhadrakumar remarked.

To complicate matters further Japanese Prime Minister Shinzo Abe has pushed ahead new legislation that would allow Japanese troops to fight overseas, for the first time since the Second World War.

In light of this the Kremlin has carried out a series of steps aimed at ensuring Russia's security.

© AP Photo / Bullit Marquez
US Can’t Afford to Lose Asia, as Washington’s Security Depends on it
Particularly, Moscow accelerates rapprochement with Beijing. China's President Xi Jinping was Putin's "guest of honor" on Victory Day on May 9, the expert noted. At the same time Putin is preparing to attend China's celebrations in Beijing on September 3.

The leaders agreed to form a common economic space on the continent through linking the Russian-led Eurasian Economic Union with the China-led New Silk Road project.

The expert pointed to the fact that the two powers also agreed to hold joint military drills in the Asia-Pacific.

These are the signs of substantial reconfiguration in the region, according to the Indian experts.

In addition, regardless of Japan's vocal displeasure, Russia has sped up modernization of military and civilian infrastructure on the Kurile Islands.

"Today, the Russian build-up around the Kurile Islands has a much bigger calculus insofar as it is in anticipation of the full-scale opening of the so-called Northern Sea Route…  Russia's Arctic policy demanded that the Kurile Islands get elevated to the frontlines of the country's defense and national security. Russia can be expected to steadily strengthen its military presence around the Kurile Islands and develop its infrastructure and port facilities, no matter what it takes," Bhadrakumar elaborated.

The expert remarked that Russia's strong strategic presence in the Arctic provides the country with an unbeatable advantage: access to all the oceans of the world.

Russo-Japanese relations are obviously getting cooler, he noted, while Sino-Russian cooperation is on the rise.

"Putin's forthcoming visit to Beijing next week becomes an important signpost of the emergent strategic realignment in the Far East," Bhadrakumar concluded.