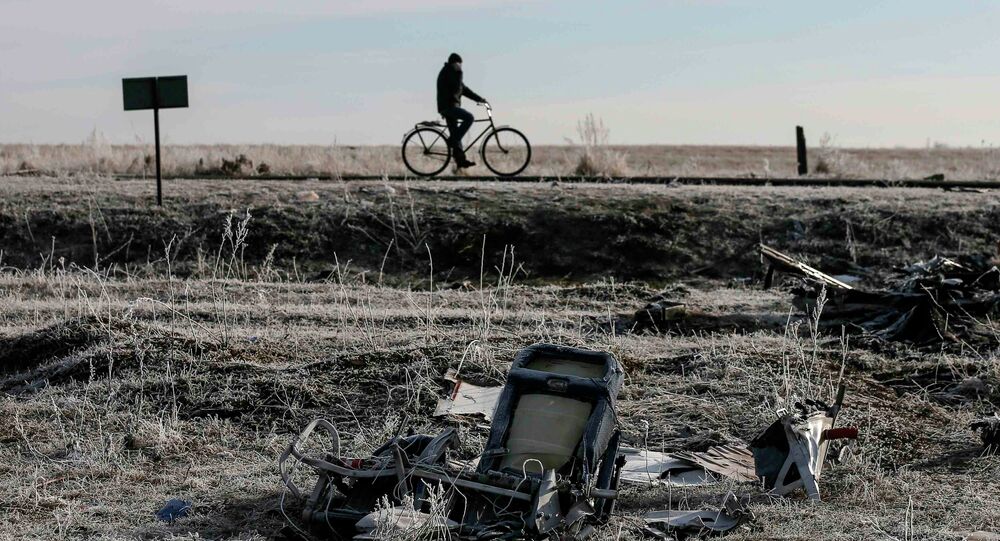 The propaganda machine of the West continues to fabricate stories about Russia's role in the MH17 flight crash, fuelling anti-Russia sentiment by small and usually false "leaks" that "drip out on a regular basis to keep the pot boiling," Toronto-based international criminal lawyer Christopher Black notes.

The West's constant anti-Russian propaganda signals their intent to carry out a regime change in Russia — one way or another; the MH17 tribunal is nothing but an attempt to point the accusing finger at Moscow, before the ongoing investigation into the case is completed, Toronto-based international criminal lawyer Christopher Black emphasizes in his article for New Eastern Outlook.

"What did the Americans and their puppets in Kiev do? Nothing except to launch an immediate and intense propaganda campaign against Russia going so far as to pin responsibility on President Putin personally. They even claimed that they had evidence. But they have produced none. Russia asked them for this purported evidence multiple times and each time they were met with silence followed by another volley of propaganda aimed at confusing the western public and covering up the fact that they do not want the Dutch report released for if that investigation had evidence that Russia was involved we can be sure it would have been plastered all over the mass media long ago, instead of these small leaks that drip out on a regular basis to keep the pot boiling," Christopher Black emphasized.

© AFP 2021 / BULENT KILIC
Russia's Veto on MH17 Tribunal 'Helped Avert' World War
According to Black, Russia was absolutely right when it vetoed the draft resolution on establishing the MH17 tribunal.

The lawyer stressed that a court can only try those accused against whom there is evidence. However, there is no evidence confirming Moscow's or the eastern Ukrainian militia's fault, except the wide-spread NATO propaganda claiming that Russia and Donbass perpetrated the events.

Currently, the investigation is not finished because the US and its NATO allies still refuse to release information that would allow investigators to find out who is responsible for the tragedy and what their motives were.

"What's more the UN Charter does not give the Security Council the right or jurisdiction to create these ad hoc tribunals and in fact this possibility was explicitly excluded when the International Court of Justice was created which has very limited jurisdiction and none over criminal matters. Of course tribunals have been created as a matter of fact despite this problem but an illegal precedent is still illegal no matter how many times it is repeated," the lawyer remarked.

© AP Photo / J. Scott Applewhite
Obama is 'Too Scared' to Tell Truth About Ukrainian War – US Journalist
There is one more problem, Black noted, pointing to the fact that the MH17 tribunal was meant to be a matter under Chapter VII of the UN Charter — a matter of international peace and security. However, in the case of MH17 "no such argument can be validly made since there has never been an example of a plane being brought down in any circumstances that has triggered the use of Chapter VII of the UN Charter," the international criminal lawyer noted.

"No call was made by anyone to create a UN tribunal with regard to the downing of the Iranian, Libyan and Korean airliners or even the downing of the plane carrying Dag Hammarskjold, the UN Secretary General, in 1961. It seems when western interests might be affected, the less that is known, the better," Black underscored.

© Sputnik / Sergey Averin
MH17 May Have Been Shot Down by Ukrainian Su-25 - Air Force General
Contrary to false Western accusations, since the very beginning Russia called for a thorough, transparent, independent and unbiased investigation and provided the Dutch commission with satellite and radar data, eyewitness reports, all technical information regarding the Buk missile systems and signaled its willingness to assist in the investigation. Surprisingly, Russia's helping hand was rejected.

The lawyer sees the MH17 tribunal as a trap for Russia. Referring to NATO's controversial military campaigns in Yugoslavia and Libya, he reminded that labeling the leadership of these countries as "war criminals" formally paved the way for the NATO aggression against the sovereign states.

"The indictments and evidence at these tribunals are concocted against selected accused for three; to defame the leaders targeted, to justify the western aggression against these countries, and finally to cover up the real role of the west in these wars," Black highlighted.

While Russia has avoided the NATO tribunal trap, the population of the West still risks falling into a propaganda trap by supporting the US-NATO aggression that may lead to an all-out war in Europe.

US, Britain, Germany Want to Force Russia to Submit to Their Will?