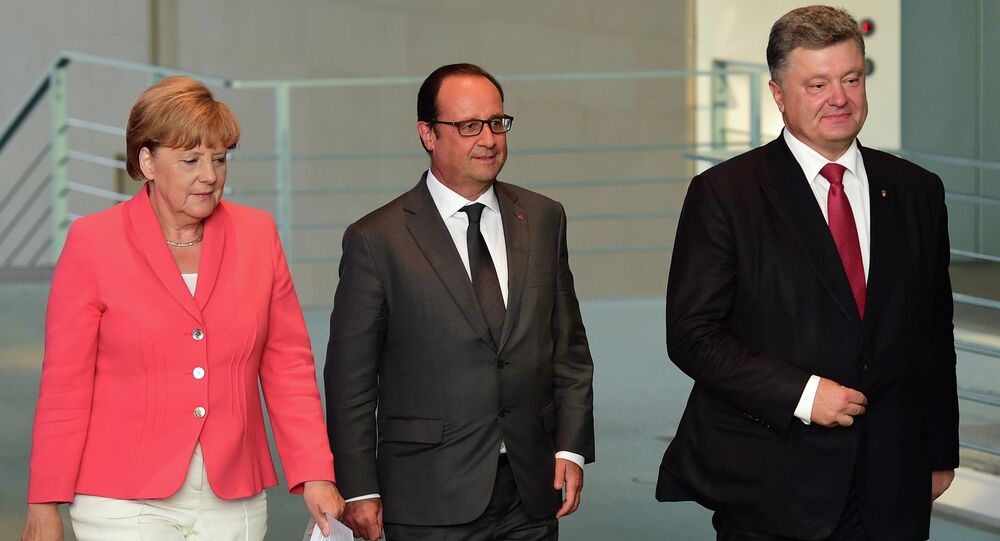 Ukrainian President Petro Poroshenko might have been trying to create a "three vs one" configuration – Berlin, Paris and Kiev against Moscow – during his brief visit to the German capital on Monday but his ambitions (some might consider unhealthy if not downright malign) were doomed to fail.

© AP Photo / Alexander Zemlianichenko
Putin’s Absence in Berlin Trilateral Meeting is Europe’s Mistake - Media
Kiev's top official appears to never tire of blaming Russia for the Ukrainian civil war sparked by a US-sponsored coup, although Moscow is not a party to the deadly conflict.

"Three versus Russia? No, underscores the German government. One cannot cut ties with Moscow even if a new meeting [in the Normandy format] has not been scheduled yet. Poroshenko has to understand that Berlin and Paris count on diplomacy, including talks with all relevant countries," the media outlet noted.

Russia, Germany and France maintain that the Ukrainian civil war could only be solved through diplomatic means and not with a military solution. Ukrainian authorities do not have 100-percent faith in a peaceful resolution and have often asked the West to provide Kiev with lethal weapons.

© Photo : Youtube/ Movieclips
Read Before You Speak: Poroshenko Compares Donbass to Mordor
The Minsk II agreements signed in mid-February were meant to pave the way for the de-escalation in the Donbass region and a constitutional reform aimed at protecting the rights and freedoms of Ukraine's eastern regions.

The Minsk peace process is stalling and the August 24 meeting in Berlin was supposed to provide an impulse to accelerate it, Tagesschau asserted.

"The implementation of the deal is not going smoothly. The West demands that Kiev engage in talks with the self-defense forces and bring about the federalization of Ukraine," the media outlet stated.

Merkel: Trilateral Meeting Aimed to Support Minsk-II, Not Put it in Doubt