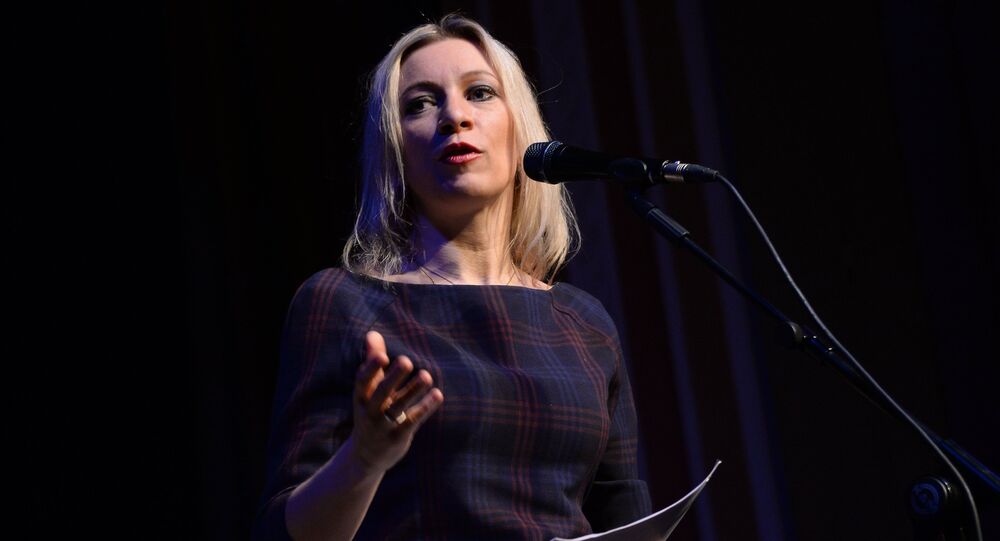 USA as a Nation Is Not Russia's Enemy - FM Spokeswoman Zakharova

In an interview published Wednesday for Russian newspaper Komsomolskaya Pravda, Maria Zakhraova, the Russian Foreign Ministry's new spokeswoman, explained that despite US authorities' attempts to ingrain hostility toward Russia among their people, Americans themselves are not the enemies of Russia.

© Photo : Fascebook / Maria Zakharova
Meet Maria Zakharova, Russian Foreign Ministry’s First Female Spokesperson
In the interview, aimed at a Russian audience, Zakharova responded to a question about whether President Obama's bragging about the effect sanctions have had on the Russian economy mean that "Obama specifically and the US in general are our enemies?"

The spokeswoman explained that "the USA is not Obama. The USA is made up of the people who live in the country. The problem lies in the fact that America's current leadership is trying to impose anti-Russian sentiments on its people. But the USA as a nation and Americans as a people are not our enemies."

As for President Obama's commentary, Zakharova noted that she found it "surprising that a head of state, a man who considers himself to be a civilized person shows pride in doing harm to others. I have always believed that we should be proud of doing good for people. This is the first time I've seen anything like this in modern diplomacy."

Obama's comments, made during the president's annual State of the Union address earlier this year, saw a wide resonance among Russian officials and ordinary Russians alike. Deputy Prime Minister Dmitri Rogozin quickly responded to the comment by joking that Obama was 'a dreamer' for thinking that "the Russian economy is 'in tatters' thanks to the US," while parliamentarian Frantz Klintsevich suggested that the comments were not a coincidence, coming at a historical turning point when Russia had come to understand its interests in a global political and economic system long dominated by the West.

Commenting on her predecessor Alexander Lukashevich's transfer to the position of Russian envoy to the OSCE, Zakharova noted that the importance of the Organization for Security and Cooperation in Europe has grown tremendously in recent years. "In the past year-and-a-half, it has become clear that Europe is experiencing a serious identity crisis. It is ceasing to become an independent player, is rejecting its sovereignty in international affairs. Just ten years ago it would be impossible to even think that Europe could be completely subordinated to the will of the US."

© Sputnik / Alexey Kudenko
US' New Anti-Russian Strategy: Confront and Reassure?
Zakharova explained that she and others "have long said that when it comes to sanctions and criticism of our country, Europe's position was imposed on it by the US position." The spokeswoman cited as an example Secretary of State John Kerry's admission earlier this month that it has been difficult for the US to persuade Europe to keep up the pressure on Russia over Ukraine, with Kerry calling a lack of unity on Iran be "a recipe, quickly, my friends, for [Europe] to walk away from Ukraine, where they are already very dicey and ready to say, 'well we have done our bit.'"

The spokeswoman noted that ultimately, "US pressure occurs everywhere, and everything that we are now seeing is the result of the tremendous pressure of this superpower on all [other] players."

The interview concluded on a more lighthearted note, with Komsomolskaya Pravda asking Zakharova whether former State Department Spokeswoman Jen Psaki had congratulated her on her promotion. Zakharova noted that "no, she has not congratulated me. She didn't call or write. But she no longer works at the State Department. With our American colleagues, we are in close contact through the meetings of our leaders. And what's interesting is that our constructive interaction through the press services gives us reason to believe that we will be able to work in a similar way on all other issues, when the anti-Russian hysteria in the US passes. We understand each other very well."

‘What a Dreamer’: Russian Deputy PM on Obama’s State of the Union Address