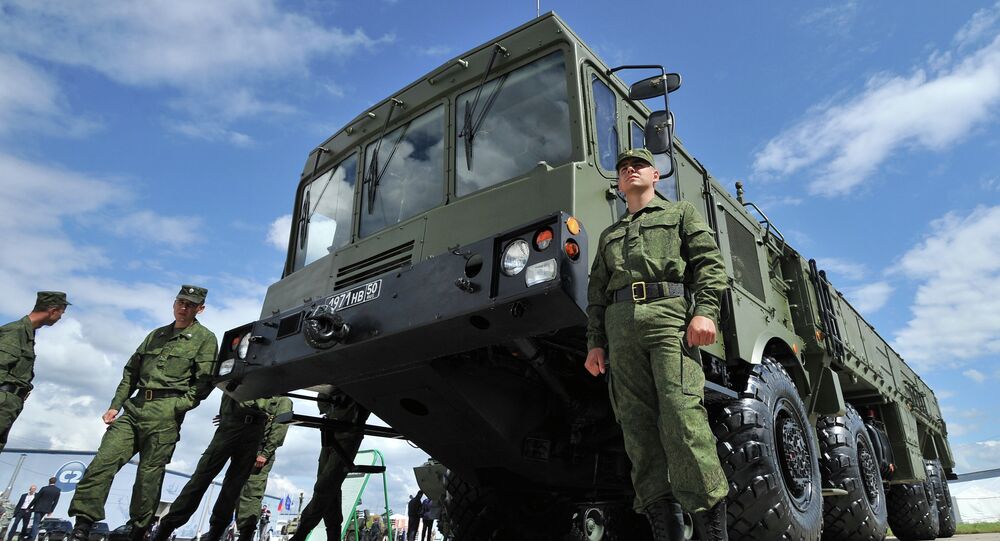 Saudi Arabia is discussing buying Russian-made Iskander tactical missile systems, Saudi Foreign Minister Adel al-Jubeir said after a meeting with his Russian counterpart Sergey Lavrov on Tuesday in Moscow; experts note a certain rapprochement in the relations between the two, but doubt the prospects of the further contacts.

His comments came after a meeting with his Russian counterpart Sergey Lavrov on Tuesday in Moscow.

"Saudi Arabia is set to intensify relations with Russia in all the spheres, including in the military field," said the Saudi top diplomat.

"Intensive contacts are taking place between the military delegations and specialists from both countries and a wide range of intended types of armaments from Russia are being discussed, including Iskander missile systems," he added.

In the event of a success, the deal could become a precedent: it would be the first delivery of Russian arms to Saudi Arabia.

© Sputnik / Eduard Pesov
Military Action Against Assad's Regime May Lead to ISIL Power Grab - Lavrov
So far, the United States has maintained its position as the top arms exporter to the Middle Eastern kingdom.

However the head of the Institute for Religion and Politics Alexander Ignatenko says that after the recent agreement between Iran and the world’s six powers on its nuclear program, the Persian Gulf states became increasingly worried about their own security, fearing that the deal will free Tehran’s hands.

Besides, Ignatenko told Russia’s Gazeta.ru news website, Saudi Arabia often uses such arms deals as something of a bonus:

“When they want to improve relations with some country, they might suggest acquiring its armaments, which, [although] I don’t rule it out, they don’t need that much [at the moment],” the website quotes him as saying.

“Saudi Arabia at the moment has its own DF-21 solid-fuel, medium-range ballistic missiles, which they purchased from China,” the website posts, quoting another Middle East analyst, Theodore Karasik, who doubts that Riyadh would actually buy any Iskanders in the nearest future.

In 2008 reports emerged that Saudi Arabia had offered to give the Russian Federation major arms contracts if the Kremlin reduced its cooperation with Iran.

© AFP 2021 / YURI KADOBNOV
Saudi Arabia Backs Political Settlement in Syria Without Assad
Similar reports emerged in 2013 that Saudi Arabia had secretly offered Russia a sweeping deal to control the global oil market and safeguard Russia’s gas contracts, if the Kremlin backs away from the Assad regime in Syria.

This Tuesday, Russia hosted the Saudi foreign minister for talks that revealed sharp differences of opinion about the fate of Syrian President Bashar Assad.

The two however agreed on the need to encourage Syrian opposition groups to pool their efforts in the search for a peaceful settlement.

Later this week, Sergey Lavrov is set to confer with the opposition Syrian National Coalition, which until now has refused to visit Russia.

© Sputnik / Alexei Danichev
The Iskander SRBM, this one from the St. Petersburg garrison.

Iskander tactical ballistic missile systems are capable of hitting both small-size and large-area targets at a distance of up to 500 km, to destroy missiles and multiple launch rocket systems, long-range artillery guns, aircraft and helicopters at aerodromes, command posts and communications centers.