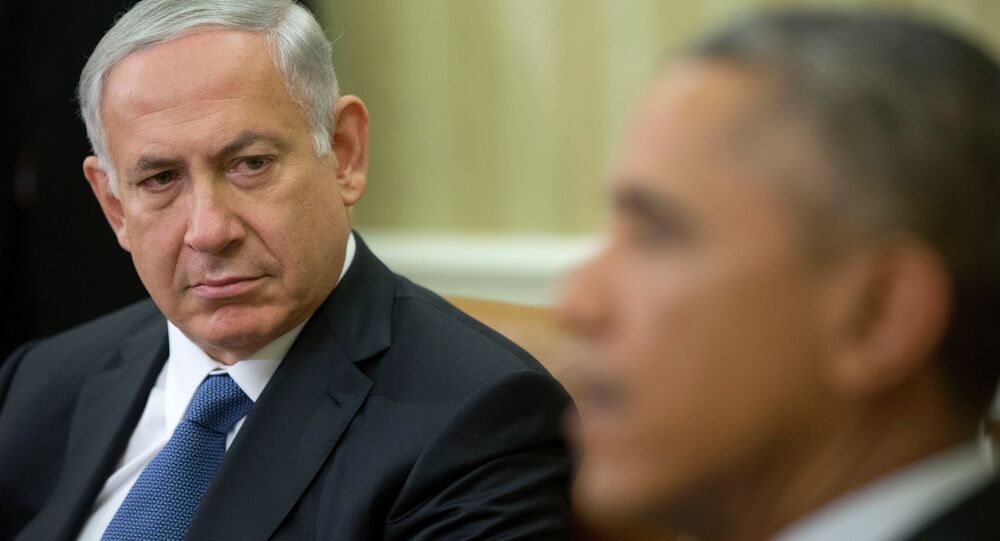 US Should Bring Israel Down a Peg – Buchanan

Netanyahu is not giving up on his goal to sabotage the deal even though undermining Israel's close ties with the US could be a far greater threat than anything the nuclear agreement could bring along.

© REUTERS / Atef Safadi/Pool
Clouds on Israeli Horizon? President Slams PM Netanyahu’s Anti-Iran Policy
For a state that is often seen as an outsider at international forums, consistent backing from the US is essential… And $3 billion a year in military aid doesn't hurt either. Despite all that, Netanyahu keeps seeking ways to mobilize Congress against the White House to destroy the ultimate achievement in Obama's career, and it's not as if his manipulations are in vain thus far.

In March, Netanyahu managed to address a joint session of Congress behind the back of the White House with the help of Israeli Ambassador to Washington Ron Dermer. Since then, he initiated and led a campaign to influence Congress on the matter of the Iran Nuclear Deal, and Dermer didn't stand aloof from his scheme.

The efforts have even roiled some traditional Israel supporters.

"One can only imagine what President Eisenhower would have done had he seen Bibi at the rostrum of the U.S. House of Representatives, ripping apart his Middle East policy," Buchanan wrote on his blog.

"Or had Ike learned that an Israeli ambassador was working the halls of Congress to kill an arms deal he and John Foster Dulles had just negotiated."

If Congress rejects the Iran Nuclear Deal and manages to override Obama's veto, the President will be humiliated and Secretary of State John Kerry would probably have to resign and forever become an object of ridicule in international forums. Meanwhile, Netanyahu "would be crowned King of Capitol Hill," Buchanan wrote.

© REUTERS / Ammar Awad
Iran Nuclear Deal: 15 Years of Netanyahu’s Outrage Come to a Boil
Recently, Kerry made it clear what the consequences would be for Israel if that happened.

"Israel could end up being more isolated and more blamed." He said bluntly.

This statement, however, didn't impress Israel's ex-ambassador to the U.S. Michael Oren as he quickly responded: "The threat of the secretary of state who, in the past, warned that Israel was in danger of being an apartheid state, cannot deter us from fulfilling our national duty to oppose this dangerous deal."

Buchanan suggests the best solution for America would be to rebuild its self-respect by declaring Dermer persona non grata and wishing him farewell.

According to the political author, if United States wants to be respected again, it shouldn't let any other state interfere in its internal affairs.

"Deal or no deal, it is time America started acting like America again." He said.