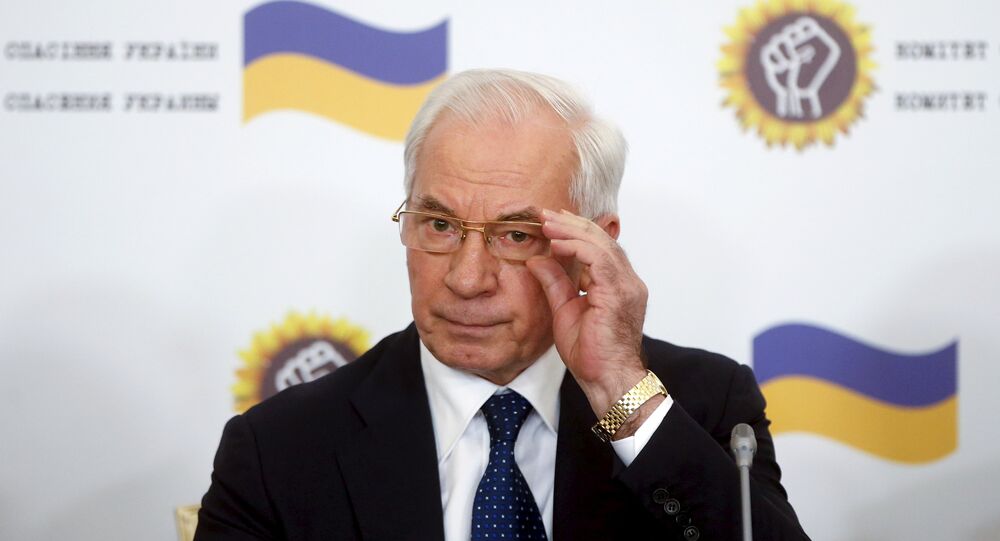 Kremlin Has Nothing to Do With 'Ukraine’s Government in Exile'

Former Ukrainian Prime Minister Azarov has announced the establishment of “Ukraine Salvation Committee”, a so-called “government in exile”, which would serve as an alternative to the country’s current leadership. The Kremlin has had to step in to refute media claims that it has something to do with the project.

© Sputnik / Alexei Furman
Kiev 'Brainwashing' Ukrainian People as Economy Collapses – Former PM
The organization is set to operate as a so-called government-in-exile, and has its own president, former Verkhovna Rada deputy Vladimir Oleynik. Mykola Azarov is its alternative Prime Minister. Former Rada deputy Ihor Markov has been appointed an alternative Minister of Economy.

“Today not all the members of the Committee are ready to reveal their names as they fear for their lives. But they are high professionals who are connected with neither the current nor the former authorities,” the former politician announced at a news conference in Moscow on Monday.

"The time will come when we will introduce them, first of all to the Ukrainian people,” he added.

Azarov also said that the Committee will return to Ukraine only through Kiev, and demand snap presidential, parliamentary and regional elections, as the country is in dire need of renovation.

The former politician said that the new body is ready to assume responsibility for the further development of their country.

© RIA Novosti . Andrei Stenin
Poroshenko Admits Ukraine's ‘Revolution’ Was Staged by Criminals – Ex-Premier
"We know who carried out the coup in Ukraine, who refused to hold dialogue with their own people. The [Ukraine] Salvation Committee thinks that it is impossible to restore accord without changing the political leadership. The Salvation Committee, unfortunately, is set up outside of Ukraine, but I am sure that we will come back. We address the Ukrainian people — we are ready to assume responsibility for restoring Ukraine’s development," he noted.

Azarov, however, said that former Ukrainian President Viktor Yanukovych and people from his circle will not be invited to join the Committee.

"When the committee was discussing this issue, we decided that those who had close ties to Ukraine’s former president should not join the committee," he said.

According to the ex-official, Europe is becoming gradually disappointed with Ukraine’s current authorities.

© AFP 2021 / PATRIK STOLLARZ
Election of President Poroshenko 'Fabricated' - Former Ukrainian PM
"Europe is beginning to understand that it bet on the wrong [people]. They wanted to get a European government, but instead they got a pro-Fascist [government] that is also absolutely incompetent in economic issues," Azarov said.

Azarov pointed out that sooner or later, not only Ukrainian people, but also Europe and the US as well will ask a question: "What can be done with this regime?"

Meanwhile, Kremlin spokesman Dmitry Peskov has refuted media claims that the Kremlin has something to do with the newly-established committee.

“The Kremlin definitely has nothing to do with this initiative," he said. "The initiative is brand new, the news conference has just ended and the news has appeared just now.”

"As for supporting or not supporting him, we certainly need to familiarize ourselves in detail with the statements he's made, study them and analyze the situation," Peskov said.

The spokesman also noted that the situation in Ukraine remains far from ideal, first of all, economically, adding that Ukraine is Russia’s closest neighbor and Russia wants to see it as a stable, predictable and dynamic state.